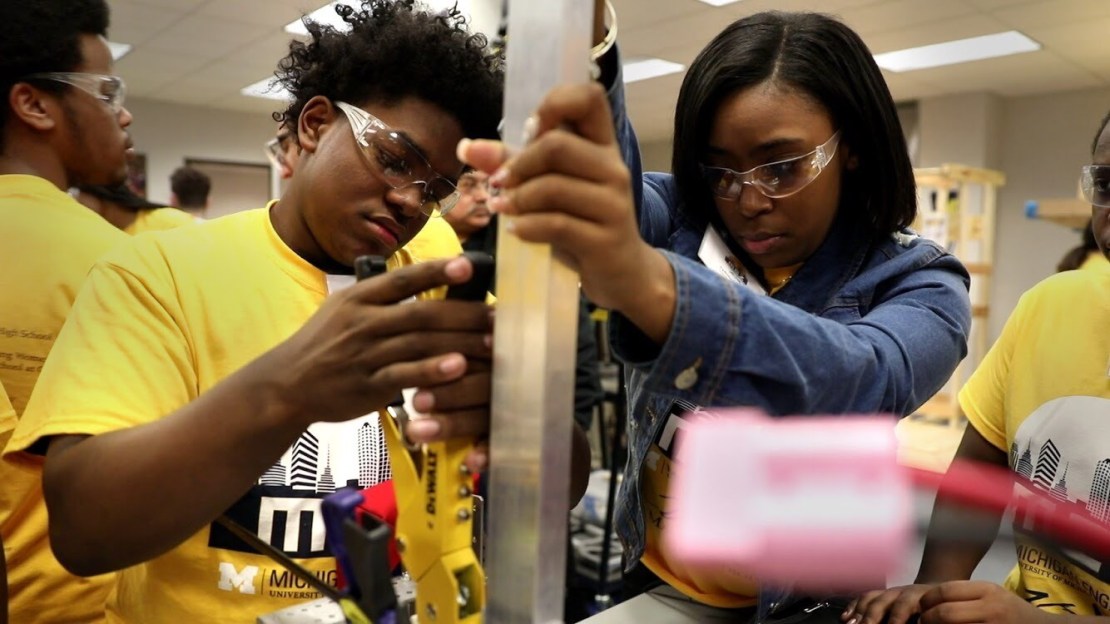 ?What do you want to be when you grow up??

It?s a common, innocuous question kids hear. When they?re little, it?s superheros and royalty–but as they get older, more practical answers emerge. The University of Michigan?s MEZ (Michigan Engineering Zone) is helping some of those practical dreams become reality.

On paper, the MEZ is a facility where Detroit students learn about science, technology, engineering and mathematics (STEM), but as MEZ director and retired Ford engineer Julian Pate explains, it is so much more than your average high school science club. Students design, build and present robots at national robotics competitions.

Michigan Engineering alum Ken Snodgrass, along with Bob Koehl, both of whom are also retired Ford engineers, had been mentoring students, but quickly found the demand was increasing beyond their capacity. They conferred with Jeanne Murabito, executive director of student affairs at the UM College of Engineering, and in 2010 the MEZ was born. Industry partners donate tools and workbenches, Detroit Public Schools provide transportation assistance and UM covers the MEZ?s lease.

Located in Detroit, a city that was built on innovation in engineering, the MEZ gives students more than technical skills. They?re provided with support, encouragement and access to products, facilities and mentors that can be life-changing.

?We have the city?s highest performing schools [represented] in the room, and we have the lowest performing schools in the room, but we don't make any distinction,? says Pate. ?We do a lot of work to draw this idea of collaboration. One of the first fundamental tenets of robotics is called ?cooper-tition,? meaning each team is there to help each other except for the two minutes of the competition.?

Pate explained that the answer a student is looking for could reside in the head of the student at the workbench next to them, and they are encouraged to conquer their fear of looking foolish. ?There are all kinds of reasons for reluctance in asking a question. Something we do for all students, all visitors, all mentors, all teachers. We ask them to raise their right hand and repeat after me, ?I have a question.? Then we say, ?Now there is no barrier.??

Students spend about 10 weeks at the MEZ during competition season, and beyond building robots, the MEZ also gives the students a head start in navigating the college landscape. MEZ mentors help students–many of whom will be first-generation college students–navigate the world of college applications, and also quell some of the concerns they might have about their ability to go to college, whether they be academic or financial.

Those 10 weeks also help the students begin to build their own professional networks. ?We provide interaction with professionals who are in technical careers,? says Pate. ?Students can ask questions like, ?How did you select [your field],? as well as build relationships with the engineering students who assist them.?

With nearly a decade of students passing through their program, the MEZ is pleased to see alumni completing degrees and embarking on careers. ?Jacob Durrah came through the MEZ, graduated with honors from Michigan Engineering and is now working for Ford as a connected vehicles and services engineer,? says Jeanne Murabito, executive director of Michigan Engineering student affairs. He credits the MEZ with motivating him to pursue his degree in computer science, as does another MEZ student, Wayne Lester, who recently graduated from Michigan with his master?s degree in aerospace engineering. Both Durrah and Lester have come back to serve as MEZ mentors as well.

The MEZ doesn?t operate without a hitch though. According to Murabito, the biggest challenge they face is capacity, in both space and funding. ?We have a great network of corporate and individual donors. Ideally we would expand from our current 19 teams to around 30 given an increase in donations to the MEZ to support that growth.?

The program is catching the attention of other programs across the country. Representatives from several U.S. cities have traveled to Detroit to tour the facility with the intent of mirroring its success. ?We've had groups from Boston, Kansas City and Minneapolis who have come to visit us, to see what we do and how we do it.?

As for those robotics competitions? Pate says, ?Nerds can have fun too!? He described the most recent FIRST Championship, which drew more than 40,000 attendees.

?There are cheerleaders, mascots, banners. People who have never experienced it come away from their first competition with a number of different emotions. The typical robot is 105 to 115 pounds and operates from a hand control. Once you see one, you develop a keener appreciation for it. These are not robots you simply take out of the box and put together,? says Pate. ?It's a wonder to behold."