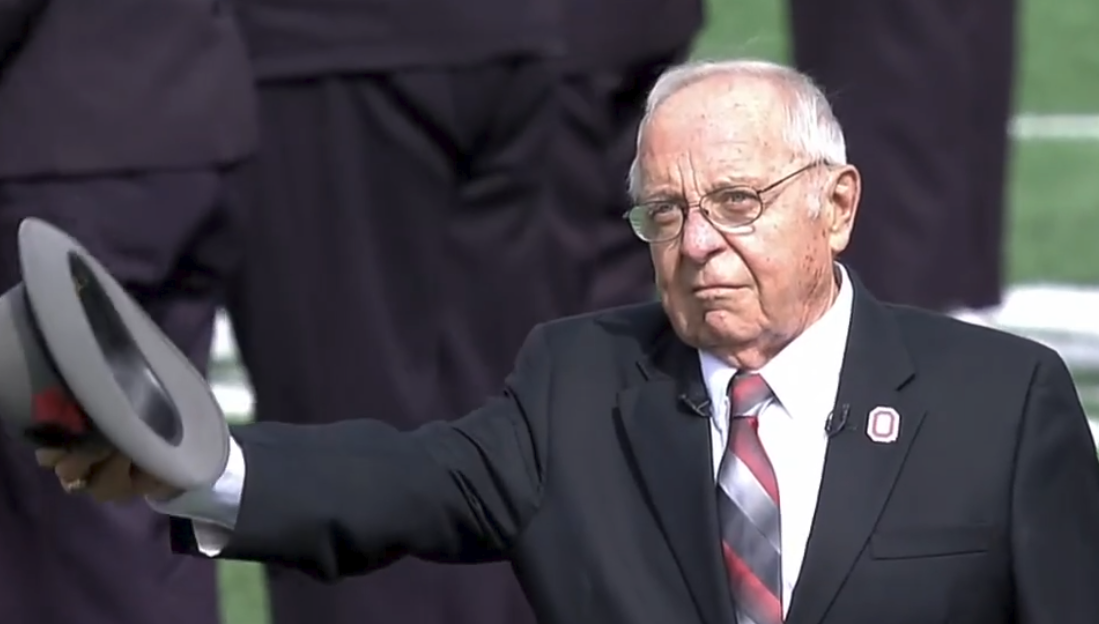 Coaches usually don?t want to be the coach who follows a legend, but Earle Bruce did it. And in replacing iconic Woody Hayes, Bruce became an Ohio State legend himself.

Now, Bruce has passed away at age 87.

Bruce is a beloved figure in Columbus who stayed connected to the program late in life as an analyst. He wasn?t swallowed up in Hayes? shadow and forged his own identity while continuing to make the Buckeyes great during a successful nine-year run as head coach from 1979-87 that culminated with his election to the College Football Hall of Fame in 2002. Not bad for a guy who began his career as an assistant at Mansfield High in Ohio in 1953.

?I?ve made it clear many times that, other than my father, Coach Bruce was the most influential man in my life,? Ohio State coach Urban Meyer said in a statement. ?Every significant decision I?ve made growing up in this profession was with him involved in it. His wife [Jean] and he were the role models for Shelley and me. They did everything with class. He was not afraid to show how much he loved his family and cared for his family.?

Time did little to diminish Bruce?s contributions that helped make Ohio State football great after he assumed command of the storied program in 1979 after Hayes infamously punched a Clemson player in the Gator Bowl following the 1978 season.

Hayes was a larger-than-life figure who molded Ohio State into a national champion. Bruce was undaunted, building on that legacy as he assumed command of his beloved alma mater and forged his own identity and legacy.

A Buckeye to the core who arrived on campus in 1951 as a running back and also served as an assistant to Hayes from 1966-71, Bruce put his own stamp on the Ohio State program. He led the Buckeyes to Big Ten championships in 1979, 1981, 1984 and 1986. And he did so while wearing a stylish fedora on the sideline that became a trademark look for Bruce.

When the fiery Bruce was done after nine seasons roaming the sideline at Ohio State, he had compiled an 81-26-1 overall mark along with a sterling 57-17 Big Ten record and two Rose Bowl appearances. Bruce took the Buckeyes to bowls in eight of his nine seasons. His best? It was first in 1979 when Ohio State went 11-1 overall and 8-0 in the Big Ten with players like quarterback Art Schlichter as Ohio State finished No. 4 in the nation.

Bruce gave way after a disappointing 6-4-1 mark in the 1987 season to John Cooper, fittingly going out with a win over Michigan to finish with a 5-4 record vs. ?The School Up North.?

Remember what @OhioStateFB players did after Earle Bruce led them past Michigan in his final game in 1987? pic.twitter.com/OFLUPFl0EW

Bruce cut his teeth as head coach at Iowa State from 1973-78, going 36-32 and taking the Cyclones to bowls his last two seasons before coming home to Ohio State. Prior to coaching Iowa State, Bruce spent a year leading the University of Tampa. He finished his college head coaching career with stints at Northern Iowa (1988) and Colorado State (1989-92) before some coaching stops in Arena Football. Bruce?s final college record: 154-90-2.

But Bruce?s contributions go well beyond a won-loss record and conference championships. He forever will be remembered as an Ohio State great who touched many lives beyond the football field and in the process made the Buckeye family better.

Our thoughts are with the Bruce family as we remember the life of a great Buckeye and man, Coach Earle Bruce.https://t.co/RZKpCCyTU4 pic.twitter.com/fRyv06njYm

Buckeye Nation lost one of its own. Thoughts and prayers to the Bruce Family. My mentor and friend, thank you for all you did for The Ohio State University, and all those players and coaches whose lives you made a difference in. pic.twitter.com/mveMGFHWXO