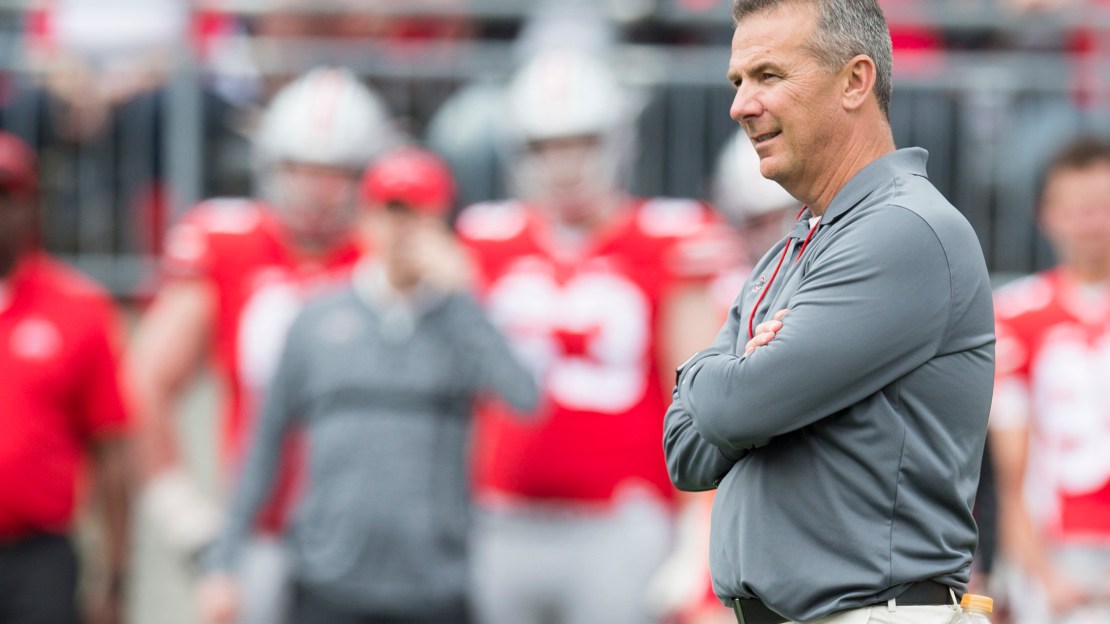 The story of the second week of spring football games was inclement weather. Stormy forecasts caused Michigan, Wisconsin, Northwestern and Indiana all to cancel their spring games. IU still had a contest, but it was held indoors and the public wasn't allowed in. Minnesota moved its game from Saturday to Thursday to avoid the coming bad weather.

Here is a look at the spring game action that took place this week at Minnesota, Ohio State, Rutgers and Maryland.

Golden Gopher WR Tyler Johnson had an Odell Beckham-style one-handed TD catch from 33 yards out that left on-lookers in awe. Watch it over and over and over again.

Ohio State QB Dwayne Haskins looks to have a bright future, and he showed the kind of throws his arm can make, including this perfect touchdown pass in the second quarter.

Buckeye QBs Dwayne Haskins and Joe Burrow. Haskins looked good as he continues to audition to be the next OSU signal-caller now that record-setter J.T. Barrett has left the Horseshoe following what seemed like a 10-year career. His down-field accuracy is sweet. But keep an eye on Burrow. He led all passers by hitting 11-of-17 passes for 189 yards and two TDs. And there also is speedy mighty mite Tate Martell. Lots of options for Urb.

Maryland RB Jake Funk was here, there and everywhere, rushing for two scores as he was featured on myriad jet sweeps in the offense of new coordinator Matt Canada. This program has a lot of nice options at running back, led by burner Ty Johnson.

Sam Renner earns scholarship. P.J. Fleck and the Golden Gophers surprised Renner, a redshirt junior walk-on defensive end, with a scholarship early in the second quarter. His teammates' reaction to the news says it all. Congrats to Sam, who grew up just 30 miles from campus.

Ryan Shazier serves as honorary captain. It doesn't take an Ohio State fan to root for the former Buckeye LB. Four months after suffering a scary spinal injury with the Pittsburgh Steelers, Shazier returned to Columbus to serve as an honorary captain, along with Malcolm Jenkins, another Ohio State defensive legend. Shazier delighted fans when he stood up from his golf cart and raised the roof. It was great to see Shazier looking so good.

Five-year-old Mordecai Carthy sets record for longest Rutgers rushing TD. In a wonderful scene, Carthy, who has autism, took a hand-off and housed it 93 yards to close out the Scarlet Knights' spring game. Well done, Mordecai, and well done, Rutgers.

Round of applause for Mordecai Carthy! ?

The five-year-old @RFootball fan has autism, and he set the record Saturday for longest rushing TD in school history with a 93-yard score to end the Scarlet Knights' spring game: pic.twitter.com/pDz0qjmxvQ

It looks like redshirt freshman Tanner Morgan is the front-runner to quarterback P.J. Fleck's second Minnesota team. He played better than true freshman Zack Annexstad. Morgan hit 18-of-28 passes for 272 yards and two touchdowns; Annexstad completed 11-of-18 passes for 186 yards and a TD. Touted JC transfer Vic Viramontes has work to do to catch Morgan and Annexstad; too many turnovers for Viramontes.

Urban Meyer made no decision on who would be his quarterback in 2018. No shock. Expect the battle between Dwayne Haskins, Joe Burrow and Tate Martell to resume in the fall, though Burrow has indicated he plans to transfer if not named the starter this spring.

Rutgers QB situation is still unsettled. Chris Ash is nowhere near ready to name a starter for an offense that has yet another new coordinator. That's nine OCs in nine years, if you are scoring at home. This time, it's John McNulty, who actually held the same job at one time. Gio Rescigno is the veteran and saw the most action with the first team. He did little to wow. You have to like the potential of early enrollee Arthur Sitkowski. He flashed a big arm and threw for 280 yards. Johnathan Lewis remains in the mix, too.

DID YOU SEE THIS?

Maryland's Jeshaun Jones made a stunning one-handed catch, but he wasn't able to get a foot down in the field of play.

Former Ohio State big-play threat Curtis Samuel attended the spring game, and he was wearing a necklace that commemorated one of the greatest plays in the history of The Game. If it doesn't look familiar in the picture below, it's his reaction after scoring the walk-off touchdown in double overtime in 2016.