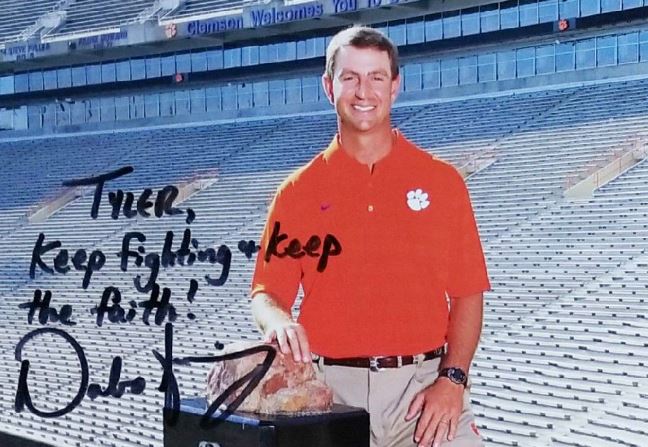 Tyler's ongoing ordeal with a rare form of aggressive bone cancer has entered the national spotlight, as publications like the The Indy Star featured his story in March. And even though Tyler isn't sure how, the story caught Swinney's attention, and the Tigers coach sent him a signed picture and a message of support.

Um, so I?m kinda speechless. This came in the mail from @ClemsonFB head coach Dabo Swinney. Thank you so much coach Swinney! Let me know when would be a good time to come to Death Valley for a #Clemson game, would absolutely love to see one in person! pic.twitter.com/4Ne9Tq987q

Big Ten Network also featured Tyler in a piece as he covered the Big Ten Basketball Tournament at Madison Square Garden in March, despite being less than two weeks removed from surgery. To learn more about his battle, watch the video below.

"I want to live a normal life and be a normal student."

If you need to pass the time during halftime, watch this piece on Purdue student reporter @tylrtrent, who is at @TheGarden covering @BoilerBall as he battles bone cancer: pic.twitter.com/tlqAI0w5Sr