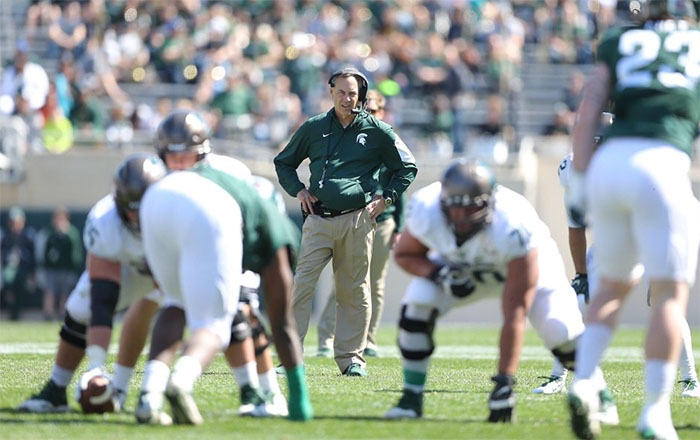 The Big Ten kicked off spring games on Saturday, with Michigan State and Purdue playing. Illinois and Northwestern just conducted a practice.

There were many to pick from among the best …

Purdue has developed a reputation for trick plays. And it had a nice one on Saturday, executing a fun hook-and-ladder.

Purdue CB Dedrick Mackey made a nice INT in the end zone that was wrestled from his hands by Amad Anderson, Jr. … but still ruled a pick.

Michigan State RB Connor Heyward made a name for himself. The 6-0, 230-pound sophomore ran 11 times for 44 yards and a TD in addition to throwing the aforementioned TD pass. Heyward was a prep quarterback who brings versatility to the field. Look for him to have a niche this fall as a weapon with senior LJ Scott since Madre London has transferred and Gerald Holmes has graduated. Elijah Collins and LaDarius Jefferson will arrive this summer to add competition for what should be a strong group of RBs for Mark Dantonio.

Illinois RB Reggie Corbin. The speedy Corbin raced 60 and 57 yards for TDs, showing fans that the running back spot should be an area of strength with him, Ra?Von Bonner, Mike Epstein and Dre Brown.

Purdue WR Beniah Franklin. The Boilermakers? need for playmaking is well-documented. They may have found one in Franklin, who led the squad with seven grabs for 116 yards. Tip of the hat, also, to RB Alexander Horvath, who ran 14 times for a team-best 75 yards for a depleted Boiler running back corps, and DB Dedrick Mackey, who picked off two passes.

Illinois wants to go fast on offense. New offensive coordinator Rod Smith likes to describe it as a ?fast-break? attack, as the Fighting Illini want to get off as many plays as they can while operating at break-neck speed. While the scheme is exciting, Illinois still needs to get the QB spot settled. Sophomore Cam Thomas was the only scholarship signal-caller on hand in the spring; four other QBs will arrive this summer. Stay tuned. Illinois also was without WRs Mike Dudek (only caught punts) and Ricky Smalling and RBs Mike Epstein and Dre Brown.

Michigan State is gonna be good. In fact, it wouldn?t be a shock to see the Spartans win the Big Ten East. Some key players sat out the spring game, but MSU still flashed potential on Saturday. This is a veteran team coming off a 10-win season.

Purdue QB David Blough is looking good. Hard to believe, but it was just last November when he suffered a bad ankle injury in a win vs. Illinois. But the senior is ahead in his recovery and made some nice plays on Saturday. Fellow Purdue QB Elijah Sindelar saw no action in the spring game as he continues to recover from an ACL injury he played through late last season. Who will win the QB job in West Lafayette? The program got a glimpse of its future when true freshman early enrollee Jack Plummer chucked a TD pass. He looks the part, to say the least.

MSU had questions on who would back up QB Brian Lewerke, who is a rising star. It looks like redshirt freshman Rocky Lombardi probably will be that guy, with Messiah deWeaver transferring. Lombardi made some nice throws.

Purdue?s defense has work to do along the front seven. But the secondary looks very promising. Keep an eye on redshirt freshmen CBs Dedrick Mackey and Kenneth Major.

Northwestern?s new Ryan Fieldhouse is an out-of-this-world facility that should be a game-changer for a Wildcat program that continues to be on the rise under Pat Fitzgerald. The views from the new digs look out onto Lake Michigan. Try finding a more scenic backdrop.