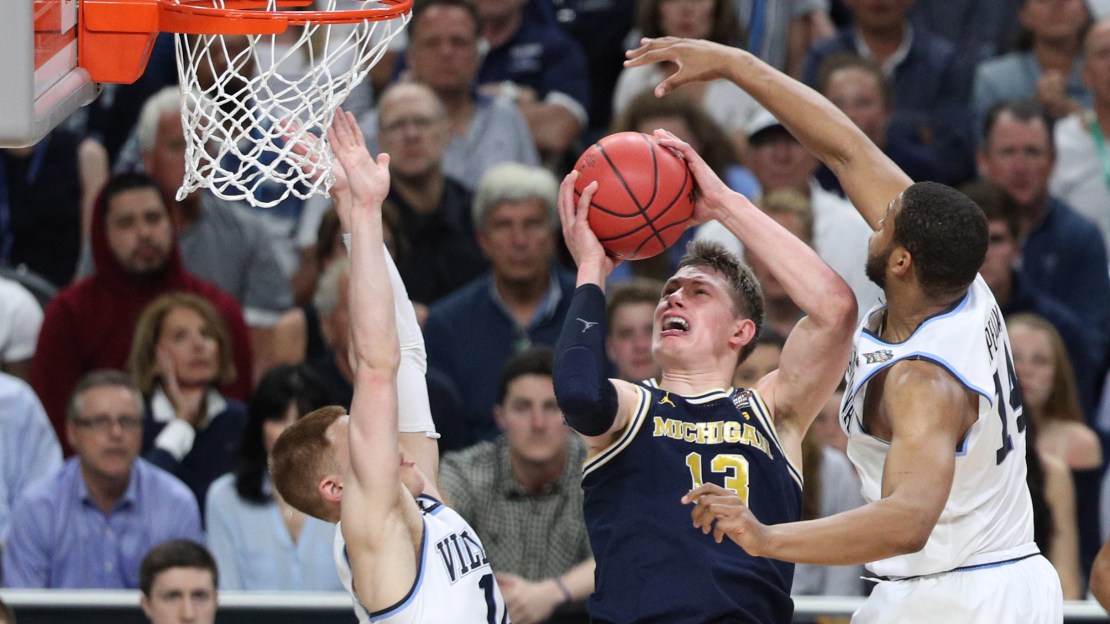 It wasn?t the biggest star on the court Jalen Brunson who killed the Wolverines? dreams. Rather, it was the Wildcats? super sixth man Donte DiVincenzo, who tallied a stupefying 31 points off the bench. Brunson finished with a modest nine points, as Villanova won its second national championship in three years, carving a place in history. Only Duke in 1991 and 1992, Kentucky in 1996 and 1998 and Florida in 2006 and 2007 have won two championships in three years since 1990. Don't be shocked if Villanova is back here next season.

Michigan got to this point by playing tough defense all season, riding a 14-game winning streak into the Alamodome. And that rugged D set the tone early in the first half for the Wolverines, who denied open looks and got in passing lanes, disrupting the potent Villanova offense. But the Wildcats got on track behind 18 first-half points by DiVincenzo, as VU ended the opening 20 minutes on a 23-7 run to take a 37-29 lead. It was a preview of things to come in the second half, as Villanova led by as many as 22 points after halftime and cruised to victory.

Moritz Wagner laid it on the line for Michigan. So did Muhammad-Ali Abdur-Rahkman. It wasn?t enough, though, as the Wolverines hit just 3-of-23 3-pointers while the Wildcats connected on 10-of-27. Still, no shame in losing to this Villanova squad, which won all of its NCAA games by double-digits.

Michigan was looking to win its second national title, cutting down the nets for the only time almost 30 years ago back in 1989 when it clipped Seton Hall in overtime. The Wolverines played for the championship in 2012, losing to Louisville. Prior to that, Michigan lost in the title tilt in back-to-back years, falling in 1992 to Duke and in 1993 to North Carolina. The Wolverines also fell in the championship game to Indiana in 1976 and to UCLA in 1965.

Michigan didn?t have a rugged road to the title game, not having to beat any team seeded higher than No. 6. Along the way to this point, the Wolverines toppled No. 14 South Dakota State, No. 6 Houston, No. 7 Texas A&M, No. 9 Florida State and No. 11 Loyola. On this night, Michigan took on No. 1 Villanova, arguably the best team in the nation for most of this season and easily the best team the Wolverines have played in the Big Dance-and the Wildcats were too much.

Top player: Villanova's super-sub Donte DiVincenzo, who scored a game-high and career-high 31 points off the bench by hitting 10-of-15 shots and 5-of-7 from 3-point range. For Michigan, Muhammad-Ali Abdur-Rahkman did all he could with a team-high 23 points.

Top stat: 38, rebounds for Villanova, including 12 offensive caroms. Michigan had only 27 rebounds with six offensive boards. VU?s Omari Spellman had a game-high 11 rebounds.

It was over when: After falling behind 21-14, Villanova closed the half on a 23-9 run, and it never looked back en route to running away with it.

What?s next: Michigan should be the favorite to win the Big Ten next season, something the program also has done under John Beilein in 2012 and 2014. The lone seniors departing are Muhammad-Ali Abdur-Rahkman and Duncan Robinson. A big key: Will Moritz Wagner return for his senior season or turn pro? Having Wagner back to team with the likes of Zavier Simpson, Isaiah Livers, Jordan Poole and Charles Matthews would make the Wolverines very formidable.