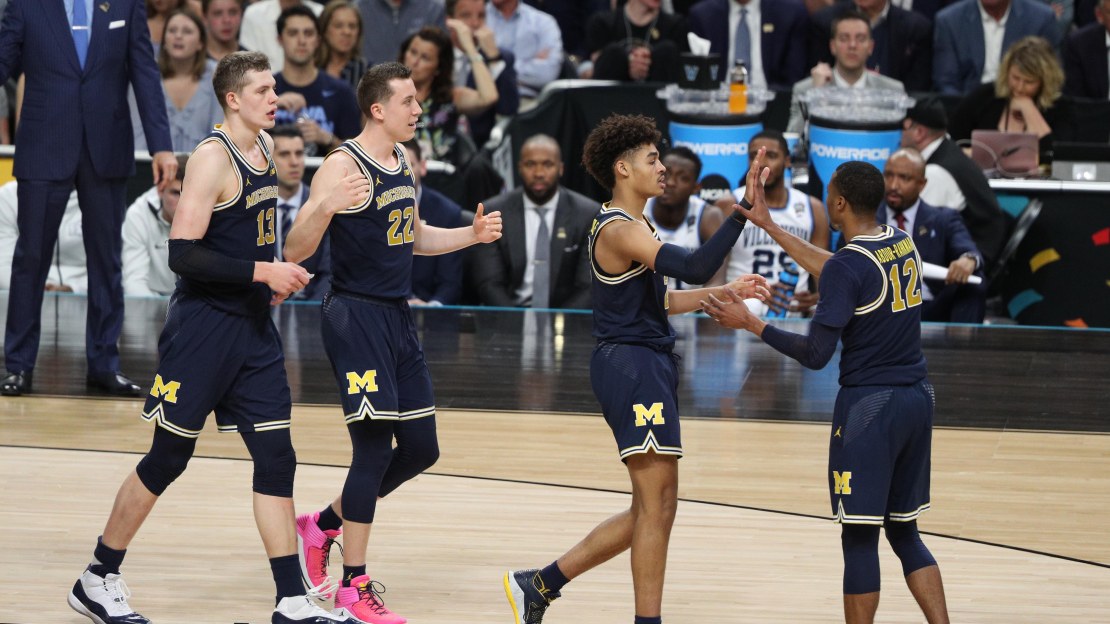 The 2017-18 season came to a close Monday night, with Villanova beating Big Ten tourney champ Michigan in the national final.

As we all do after the season ends, it's time to turn the page to next season.

Here is my early, early, early stab at predicting the Big Ten order of finish, knowing that many key players are still weighing decisions about whether to turn pro or not. In other words, this will need to be updated as soon as all pro decision are official.

1. Michigan. The Wolverines will lose seniors Muhammad-Ali Abdur-Rahkman and Duncan Robinson from a spectacular team. If everyone else returns, the Wolverines will be the clear favorite. A couple personnel concerns: Moritz Wagner and Charles Matthews could turn pro. Point guard Zavier Simpson will be back, while Isaiah Livers and Jordan Poole are exciting rising sophomores. Oh, and the Wolverines will welcome one of the Big Ten?s best recruiting classes led by Ignas Brazdeikis and Brandon Johns.

2. Michigan State. Another year, another Big Ten contender for Tom Izzo, who will be in his 24th season in East Lansing. Miles Bridges and Jaren Jackson Jr. won?t be back as each declared for the NBA draft and signed with agents. Nick Ward also is testing the draft waters but should be back. Bottom line: The Spartans still will have talent in the form of Ward, Cassius Winston and Joshua Langford, among others. Plus, MSU welcomes the top recruiting class in the Big Ten led by Marcus Bingham Jr., Gabe Brown and Michigan Mr. Basketball Foster Loyer.

3. Nebraska. If Isaac Copeland Jr. and James Palmer Jr. return after testing the NBA draft waters, the Cornhuskers could earn that NCAA bid that eluded them in 2017-18 and enjoy an upper-division finish. But how will Tim Miles deal with big expectations? Glynn Watson is a nice veteran and Isaiah Roby is breakout star to monitor.

4. Maryland. Dion Wiley is transferring and Justin Jackson is going pro. That hurts, as the Terps look to return to the NCAA tourney after missing it this season. Mark Turgeon has a good big man in Bruno Fernando, and Darryl Morsell is on the rise. But could Fernando leave? It would be a big blow if he does. Maryland will have a top tandem to build around in Anthony Cowan and Kevin Huerter. That?s nice. And a decorated recruiting class also will help, led by five-star big man Jalen Smith.

5. Wisconsin. The Badgers missed the NCAA tourney for the first time since 1998. Don?t expect it to happen again. Greg Gard will have a lot of weapons, especially if Ethan Happ opts to return after testing the draft waters. Sophomore-to-be Brad Davison looks like a future star, and Wisconsin also will have back D?Mitrik Trice and Kobe King, who both got hurt and missed most of last season. Brevin Pritzl, Aleem Ford, Khalil Iverson and Nate Reuvers are other key cogs.

6. Penn State. Pat Chambers? crew will look to build on an impressive run to the NIT title. Could an NCAA tournament be next? It won't be as easy now that Tony Carr has announced he will enter the 2018 NBA Draft. Losing senior sharpshooter Shep Garner also hurts. The Nittany Lions still have talent like Lamar Stevens, Mike Watkins and Josh Reaves back, though.

7. Purdue. The Boilermakers lose four key seniors in Vince Edwards, Isaac Haas, Dakota Mathias and P.J. Thompson. Still, Matt Painter has some intriguing parts back. Carsen Edwards may be the best player in the Big Ten, while Matt Haarms is a rising star who?s only gonna improve. Nojel Eastern needs to take the next step. Keep an eye on Dartmouth grad transfer Evan Boudreaux along with freshman guard Eric Hunter. The Boilers are the ultimate sleeper.

8. Indiana. Year Two for Archie Miller will be interesting. The Hoosiers lose Robert Johnson, Josh Newkirk and Freddie McSwain. But IU will have some talent in players like Juwan Morgan, Justin Smith, Devonte Green and De?Ron Davis. Miller secured one of the Big Ten?s best recruiting classes led by wing Jerome Hunter.

9. Ohio State. Losing Big Ten player of the year Keita Bates-Diop and Jae?Sean Tate will hurt, along with Kam Williams. Chris Holtmann can count on having C.J. Jackson back along with Kaleb and Andre Wesson. The Buckeyes have a Top 25 recruiting class led by Top-100 prospects Luther Muhammad and Jaedon LeDee.

10. Iowa. Last season was a disappointment in Iowa City, but those growing pains could pay dividends next season. Players like Tyler Cook, who is testing the draft waters, Isaiah Moss, Luka Garza and Jordan Bohanan give Fran McCaffery plenty to build around. Incoming freshman wing Joe Wieskamp should help now.

11. Minnesota. The Gophers were a disappointment, thanks to injury and off-court issues. How will Richard Pitino respond? Minnesota will miss Nate Mason. Isaiah Washington is a rising talent, and Amir Coffey and Jordan Murphy will be stars with Dupree McBrayer playing a key role. Keep an eye on incoming stud Daniel Oturu, a good big man.

12. Illinois. Lots of roster turnover, as Leron Black has turned pro and Michael Finke, Te?Jon Lucas and Mark Smith have transferred with Mark Alstork having graduated. Trent Frazier looks like a future star that Brad Underwood can count on along with Kipper Nichols and Aaron Jordan. The Illini haven?t made the NCAA tourney since 2013. Illinois will welcome a robust recruiting class led by stud guard Ayo Dosunmu, considered by some the top player in the state.

13. Northwestern. No Big Ten team was a bigger flop, as the Wildcats couldn?t duplicate the NCAA trip they made in 2017. The hunger and work ethic were gone. Chris Collins will miss Bryant McIntosh, Gavin Skelly and Scottie Lindsey. At least Vic Law and Dererk Pardon are back. Top-100 wing Pete Nance headlines a nice set of recruits.

14. Rutgers. Steve Pikell has the Scarlet Knights going in the right direction, but the losses of Corey Sanders and Deshawn Freeman will be difficult to overcome. Expect Geo Baker to be the star for a team that will compete and defend every possession. Eugene Omoruyi and Issa Thiam will be counted on in the front court.