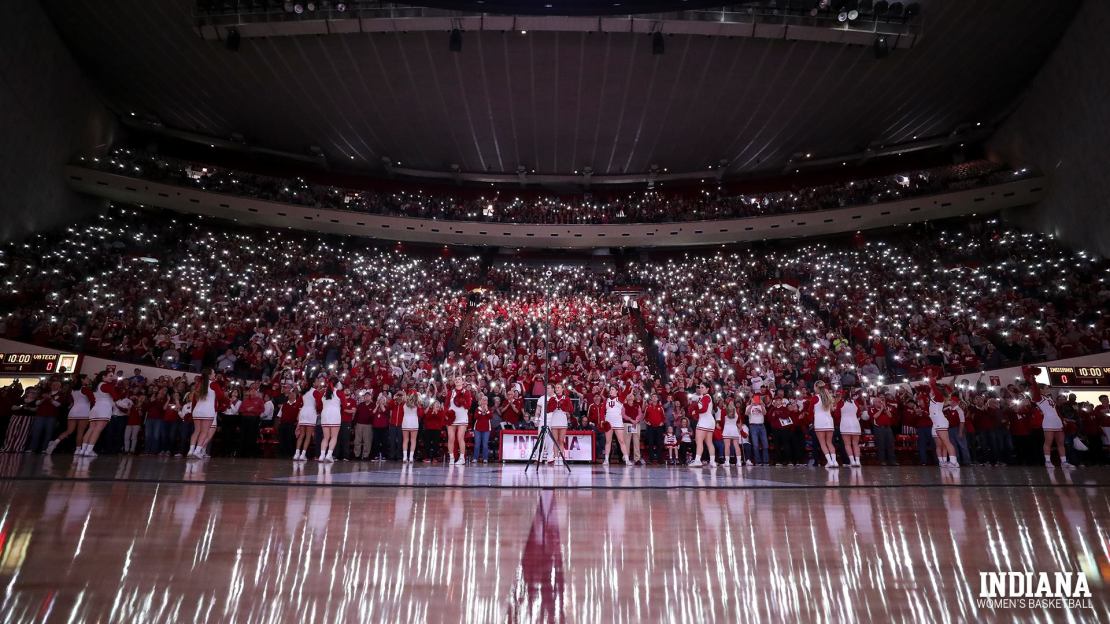 Seniors Tyra Buss and Amanda Cahill combined for 13 of Indiana?s 22 fourth-quarter points as the Hoosiers rallied for a 65-57 win over Virginia Tech in the championship game of the Women?s National Invitation Tournament (WNIT) on Saturday afternoon before a program record-setting crowd of 13,007 at Simon Skjodt Assembly Hall.

Indiana (23-14) wins its first WNIT title (and first national postseason tournament championship of any kind) while becoming the sixth different Big Ten school, and second in as many seasons, to earn a WNIT championship. The Hoosiers, who also tied a school record with their 23rd win of the season on Saturday, join Penn State (1998), Wisconsin (2000), Ohio State (2001), Rutgers (2014) and Michigan (2017) as the Big Ten?s WNIT champions.

Saturday?s attendance was the largest crowd to watch a Big Ten women?s basketball game this season (previous high was 12,434 on Feb. 11 for Michigan State?s home win over Michigan), as well as the largest in Indiana women?s basketball history, surpassing the previous mark of 10,022 against Purdue on Feb. 20, 2005. In addition, it was the sixth-largest crowd in WNIT history and largest since the 2009 championship game (16,113 at Kansas).

Thanks to Indiana?s victory on Saturday, the Big Ten secures a sweep of both NIT titles this season, with the Penn State men earning their second NIT crown earlier this week at Madison Square Garden in New York. This officially marks the first time in conference history that Big Ten schools have earned both the men?s and women?s NIT championships in the same season.

Buss was named the WNIT Most Valuable Player, with Cahill joining her on the All-Tournament Team.

The @bigten is home to the NIT and WNIT champs.