Illinois OC Rod Smith Q&A: 'We will be a spread, up-tempo-type of team' 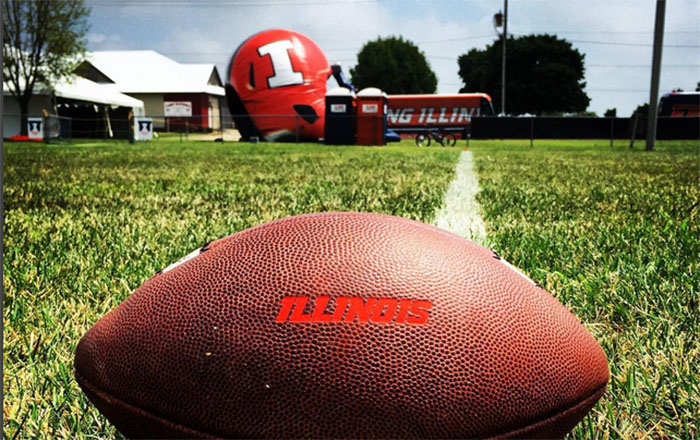 The Illinois offense needs help. It's no secret, as the attack has failed to take flight in two years under Lovie Smith. The numbers last year were brutal, as the Fighting Illini ranked last in the Big Ten in scoring (15.3 ppg) and 12th in scoring defense (31.5 ppg). The team also was 13th in total offense (280.4 ypg) and 12th in total defense (418.4 ypg). The Illini couldn?t run (105.6 ypg), either, ranking last in the conference.

Smith also pushed the buttons on offenses at Indiana under Kevin Wilson and at South Florida under Jim Leavitt. And Smith coached quarterbacks at Michigan and West Virginia for Rodriguez. Along the way, Smith groomed signal-callers like Pat White at West Virginia, Denard Robinson at Michigan and Tate at Arizona. Each was a primo dual-threat.

I caught up with Smith this week.

Q: Did you have any connection to Lovie Smith?
A: I had zero connections other than we have the same last name. I was excited and a little enamored (when he contacted me). You don?t get to work for too many guys who have coached at the highest level like he has in the NFL and who also coached in the Super Bowl. I have great respect for him as a coach and a person. I was honored he called and not to just be offered the job but to even be interviewed.

Q: How would you describe your offensive style?
A: We will be a spread, up-tempo-type of team. We will use different formations and make the defense defend the length and width of the field. We are trying to get athletes in space and get them in one-on-one battles. The hardest thing to do in football is to tackle in the open field.

Q: How does the quarterback situation look with Jeff George Jr., and Chayce Crouch both gone?
A: It is an interesting situation. I have one guy on the roster (sophomore Cam Thomas) who is on scholarship along with two walk-ons. I had a similar situation when I went to Arizona. Matt Scott was my single scholarship kid. I give a lot of attention to a small number of quarterbacks. But we want to upgrade the position in terms of skill set as well as depth. We signed some guys (MJ Rivers, Matthew Robinson and Coran Taylor along with Virginia Tech grad transfer A.J. Bush) to come in to provide some completion and depth.

Q: How do the other skill positions look?
A: We are OK. We still have areas we need to address. We need to address team speed, athleticism. I think we have some guys who are capable, but we always are looking to upgrade. I think you have to have competition in every room. I think we have enough guys here that we can do some good things with, but at the same time we want to keep upgrading.

Q: How has Rich Rodriguez influenced your career?
A: He has been tremendously influential. I played for him (Glenville State) and coached with him for a long time. He has been extremely instrumental in my career. I owe a lot to him. I am grateful for him and think highly of him.

Q: Talk about the QBs you have helped develop over the years. It?s an impressive group that includes Pat White, Denard Robinson and Khalil Tate.
A: I have been fortunate to have some good players. It is always fun when you get a guy like that at quarterback: A good athlete who can thrown the football. All three of those guys could do that. We had others, like Matt Scott at Arizona who was second-team All-Pac 12, Matt Grothe at South Florida, who is the Big East all-time yardage leader. We have had a lot of good, successful quarterbacks. We kinda know what we are looking for and hopefully we can find one of those type of guys for Illinois.