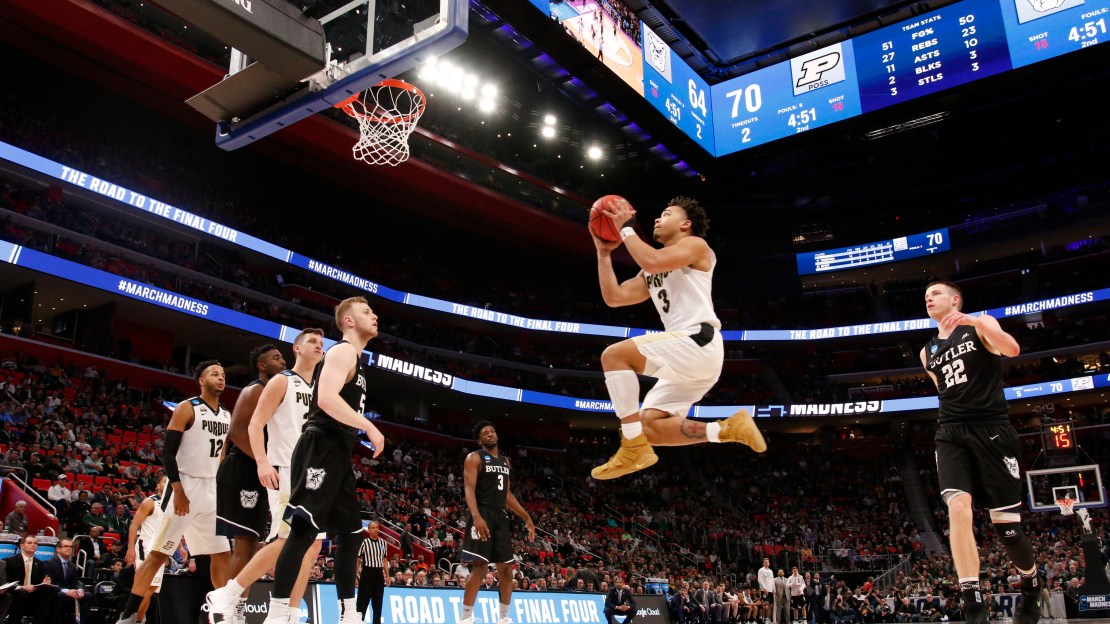 No doubt, Michigan's Moe Wagner and Purdue's Carsen Edwards are two of the best players left in the Sweet 16.

The good news: Michigan and Purdue are still alive and dreaming big, and they can thank a couple of unlikely stars in Charles Matthews (15.5 points and a team-best 8.0 rebounds per game) and P.J. Thompson (12.5 points and zero turnovers), respectively. But for the Wolverines and Boilermakers to reach the Final Four in San Antonio, Wagner and Edwards will need to start playing like BMOCs.

If you look at the stats for Michigan's first two NCAA games, you'll notice Wagner hasn't been himself on the offensive end. Against Montana, the junior scored five points on 2-of-6 shooting with three turnovers and six rebounds. In the victory vs. Houston, Wagner tallied a modest team-high 12 points on 5-of-9 shooting with seven rebounds. That's an 8.5 scoring average in the NCAA tourney for a guy who is averaging 14.2 points. And that 8.5 average is fourth on the team in NCAA play behind Matthews, Muhammad-Ali Abdur-Rahkman and Duncan Robinson.

Wagner is a unique weapon, a stretch 5 who can play facing the basket and also on the block. The 6-11 German will need to play like an All-Big Ten talent if Michigan wants to get by a big, physical Texas A&M squad Thursday night and eventually reach the Final Four for the first time since a runner-up finish in 2013.

The situation is similar for Purdue, as Edwards has been off his game. The 6-1 sophomore has emerged as one of the nation's top players this season. Explosive, dynamic, physical, fearless … any number of words are apt descriptors of Edwards, who averages a team-high 18.2 points on the season. But, he has yet to have an Edwards-like game in the NCAA tourney, averaging 14 points and one assist, while shooting 28 percent (8 of 29). Edwards' recent struggles date back to the Big Ten tourney title game, actually; he's made just four shots in each of the last three games.

Luckily, Thompson has picked up the slack. The senior point guard, after averaging three points in the previous nine games, scored 11 points in the NCAA opener and added 14, matching his best since January 20, in the Round of 32.

The kind of talents Wagner and Edwards are, it's only a matter of time before they break out. No. 3 Michigan, the highest seed remaining on the left side of the bracket, and No. 2 Purdue hope that happens in the regional semifinals.