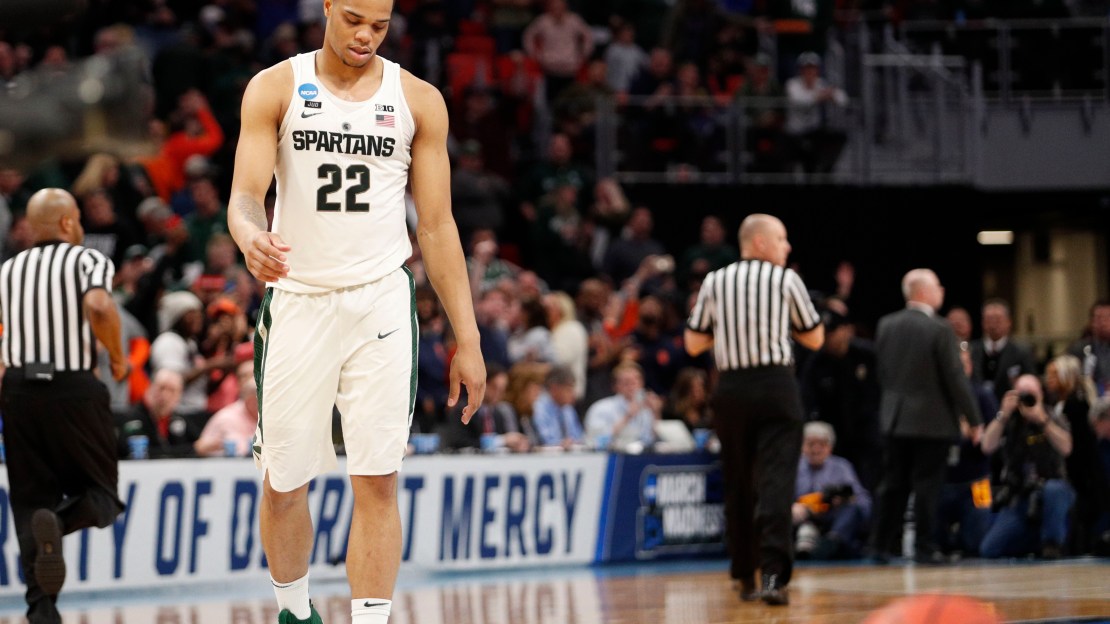 Forget about March Madness. For Michigan State, it?s March Sadness. For the third year in a row, the Spartans haven't advanced past the second round of the NCAA tourney. In 2016, the Spartans lost in the first round to Middle Tennessee. Last year, MSU fell by 20 points to Kansas in the second round. This time, No. 11 Syracuse and its vaunted 2-3 zone provided the cold bucket of water to Michigan State?s March hopes, taking a stunning 55-53 win.

The 53 points were a season-low for a team lauded as Tom Izzo?s "most gifted ever.? A 30-5 record and Big Ten outright regular-season title are great feats. But the Spartans wanted to taste March glory. It won?t happen.

This was an ugly game. Let?s call it a rock fight. And Syracuse found a way to grind out a huge win after beginning the Big Dance in a play-in game vs. Arizona State. Now, SU is off to the Sweet 16. Michigan State will be horrified when it looks at the box score. The Spartans hit just 17-of-66 shots (25.8 percent, a school record low in an NCAA game).

Top star: Cassius Winston. The point guard registered a team-high 15 points and a game-high six assists. He did his part to chip paint off the rim, hitting just 4-of-12 shots and 3-of-11 from 3-point land.

Top stat: 37, 3-point attempts for Michigan State, a school single-game record. And the Spartans clanged way too many, making just eight. That negated the stunning 29 offensive rebounds-29!!!!-they corralled. It was a game filled with weirdness.

Top shot: Matt McQuaid. In the final seconds before the half, McQuaid hoisted a 3-pointer, but it was blocked. McQuaid got the ball back and put up another shot before the buzzer. Somehow, he banked it in to give Michigan State the lead and momentum entering the locker room.

Michigan State heads to halftime with the lead after a wild buzzer-beater! ?#MarchMadness pic.twitter.com/sJc8fGnYGe

Top dunk: Miles Bridges. As he's done so often in his two seasons in East Lansing, Michigan, the Michigan State high-flyer showed off his ups and athleticism, making this second-half dunk look effortless.

It was over when: After Cassius Winston made a jumper with 5:43 left to give MSU a 48-43 lead, Syracuse closed the game on a 12-5 run. While Michigan State continued to miss shots, Syracuse kept chopping away and sinking free throws, hitting 24-of-31 (77 percent).

What?s next? Questions abound for Michigan State, which figures to see Miles Bridges and Jaren Jackson both turn pro. Cassius Winston, Nick Ward and Josh Langford will be back, most likely, so talent will remain. But can this team regain its NCAA tourney swagger? Regular-season accomplishments are nice. But March is the month that matters. And the Spartans have fallen flat.