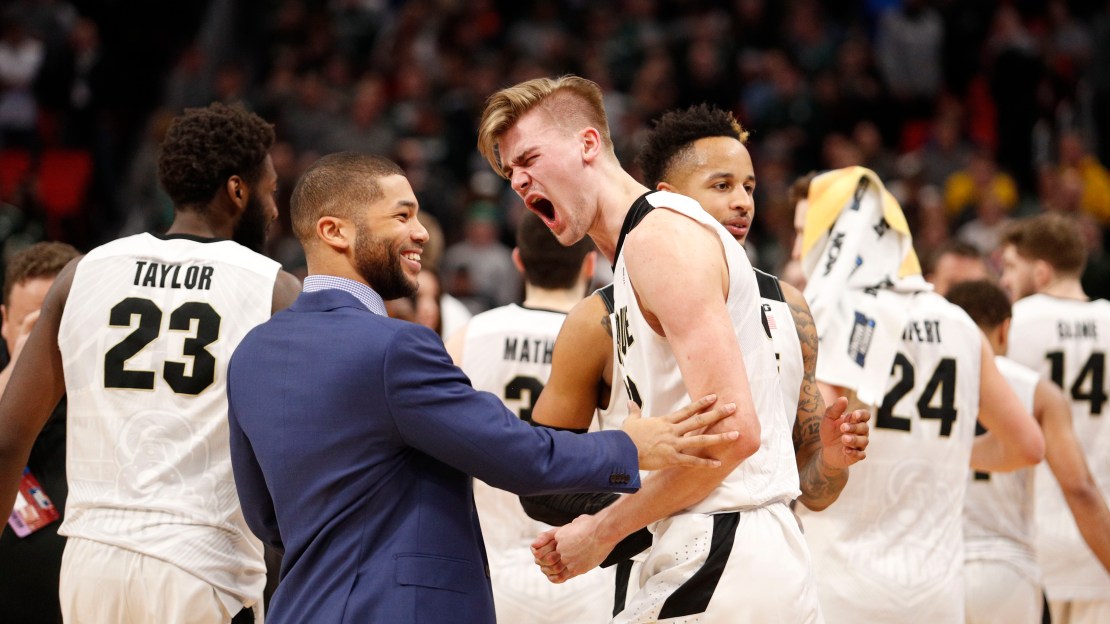 No Isaac Haas, no problem for Purdue, which gritted out a 76-73 win vs. Butler in the second round of the NCAA tourney. Purdue is in the Sweet 16 for the second season in a row, losing to Kansas last year. This win over No. 10 Butler-which beat No. 7 Arkansas in its NCAA opener-was the Boilermakers? 30th on the season, setting a school single-season standard.

The Boilermakers beat the Bulldogs earlier this season, taking an 82-67 win in the Crossroads Classic in Indianapolis in December. Purdue led by as many as 26. Prior to the win, the Boilermakers had lost five in a row to Butler. But this meeting was much closer–and much more important. The Bulldogs took control early as they were hot from 3-point land. But Purdue fought back to lead, 40-36, at halftime. Then, the Boilers asserted control in the final 20 minutes after trailing by as many as nine in the first half.

Credit the Boilers shooting and savvy, as well as defense. No. 2 Purdue rolled in its NCAA opener by clobbering Cal State Fullerton, 74-48. But the Boilermakers suffered a blow in the game, as Haas fractured his right (shooting) elbow after crashing hard to the floor late in the game. The school ruled him out for the rest of the tourney, but Haas was fitted for a brace and warmed before ultimately sitting out. In the end, redshirt freshman Matt Haarms filled in well for Haas with seven points, six rebounds and two blocks.

Top star: Vincent Edwards. Stand and cheer for the senior star who battled an ankle injury down the stretch of the season and was benched in the Big Ten tourney title game loss to Michigan. But the time off seems to have helped Edwards, who tallied a team-high 20 points on 6-of-8 shooting and added four rebounds despite battling four trouble for most of the game. And Edwards had one huge block with 1:30 left and Purdue clinging to a two-point lead.

Purdue with a HUGE defensive play down the stretch!#MarchMadness pic.twitter.com/NxCyJRf0qQ

Top stat: 45.8, Purdue?s 3-point percentage. The Boilers hit 11-of-24 from beyond the arc. Butler hit on just 30 percent (6-of-20) and missed its last nine 3-pointers, including the would-be overtime clincher. That, ladies and gentlemen, was the difference. Here are a couple other great stats.

It was over when: With 17 seconds left, Purdue?s Dakota Mathias nailed a 3-pointer to push the Boilermakers? cushion to 76-71, what proved to be the final dagger. Butler had one final chance to send the game to overtime, as P.J. Thompson missed the front end of one-and one, but the Bulldogs' last-second heave caromed off the iron.

What?s next: Purdue will take on No. 3 Texas Tech (26-9) in the Sweet 16. The Boilermakers are trying to advance to the Elite Eight for the first time since 2000, when they lost to Wisconsin. The Boilermakers are 2-0 all-time vs. the Red Raiders, beating them in West Lafayette in 1987 and in Lubbock in 1988. Texas Tech has beaten No. 14 Stephen F. Austin and No. 6 Florida to reach the Sweet 16 for the first time since 2005. This decorated group of Purdue seniors isn?t done yet. Vince Edwards, Mathias, Haas and Thompson are still authoring the end of a glorious four-year run.