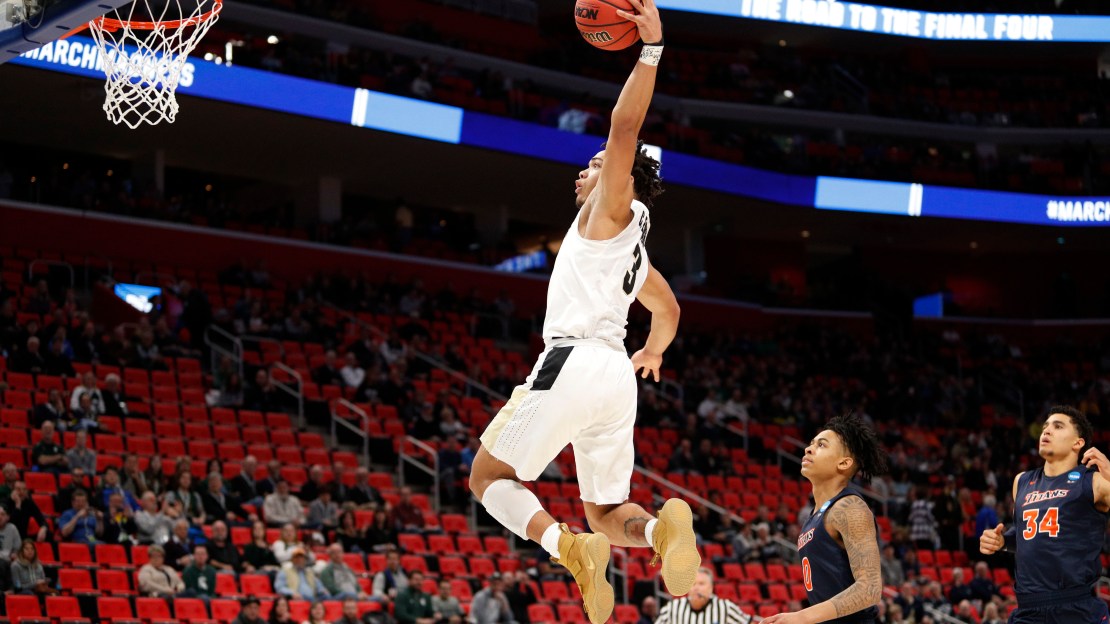 Purdue is a pick by some to reach the Final Four. And the No. 2 Boilermakers certainly looked the part in destroying No. 15 Cal State Fullerton in their opening NCAA game, 74-48.

This has been one of the most dominating performances by any team thus far in the tourney, as Matt Painter's team won by 26. And Purdue needed this, as it had lost some of its mojo in the late stages of the season, going 5-4 in its last nine game after running off 19 wins in a row. The Boilers have been one of the Big Ten's best teams, but they have no trophies to show for it. A run to the Final Four would no doubt make up for not winning the Big Ten regular-season or tourney titles.

The Boilermakers-the highest seeded Big Ten team in the Big Dance-took a good first step today in dumping overmatched Cal State Fullerton of the Big West. Purdue hadn't played since March 4, as the Big Ten tourney was played a week early. And the Boilermakers looked rusty early on, leading only 30-21 at the half. But Purdue got rolling in the second half, using its size advantage to wear down the Titans while also warming up from outside en route to outscoring CSF 44-27 over the final 20 minutes.

Top star: Carsen Edwards. The explosive sophomore guard finished with just 15 points-modest by his standards-but he kept Purdue going during a bumpy first half by getting to the basket, drawing fouls and just finding a way to score. The Boilermakers found their collective stoke in the second half, as 10 different players scored.

It was over when: This was still a game at halftime, as Purdue led, 30-21. But the Boilers opened the second half by out scoring the Titans 19-6 to forge a 49-27 lead with 13:57 left in the game. Purdue cruised from there, emptying its bench in a blowout victory.

What's next: Purdue will play the winner of the No. 7 Arkansas vs. No. 10 Butler game on Sunday with a berth in the Sweet 16 on the line. Purdue made the Sweet 16 last year but hasn't been to the Elite Eight since 2000 or the Final Four since 1980. The Boilers beat Butler earlier this season but had lost five in a row to Butler before that. Purdue is 1-1 all-time vs. Arkansas, last meeting in the 1983 NCAA tourney. The Razorbacks dumped Purdue in what was Gene Keady's first NCAA game as Boiler coach.