Dienhart: Big Ten in 2018 NCAA tournament, at a glance 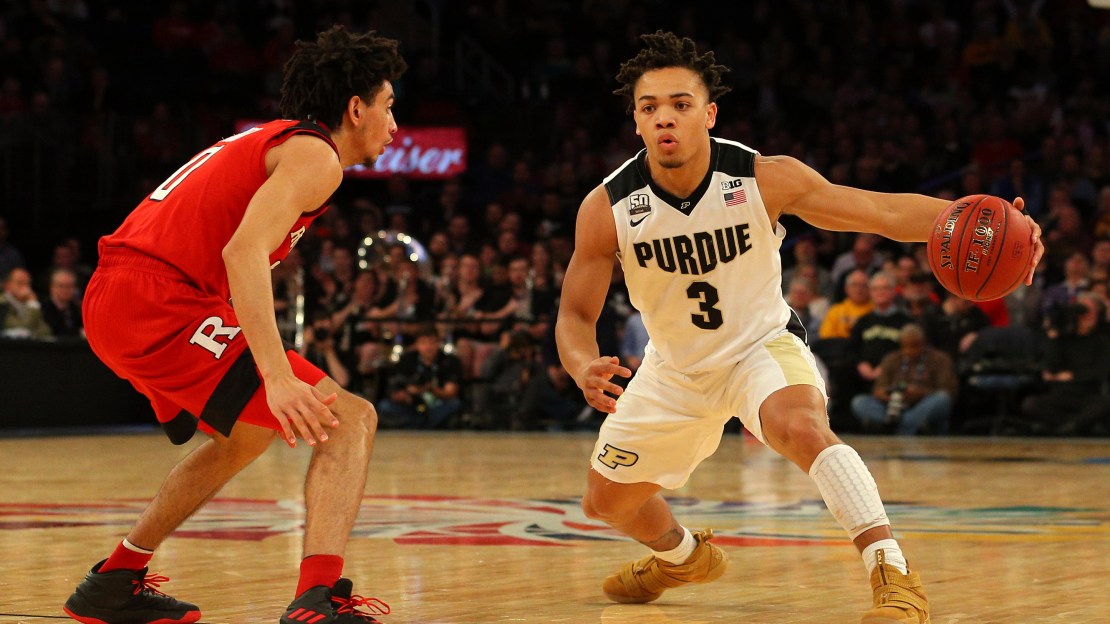 Here is a breakdown of the Big Ten in the bracket.

Seeded too high: No. 2 Purdue, East. The Boilermakers are a No. 2 seed based largely on its non-conference strength, beating Arizona, Marquette, Louisville and Butler. But Purdue, which has its highest seed since 1998, had just two noteworthy wins in the Big Ten, taking down Michigan twice; it lost at home to Ohio State and at Michigan State and failed to win the regular-season or tourney titles. The good news: The Boilers are very talented and have won five of their last six games, the only blip being the Big Ten title game loss to surging Michigan.

Seeded too low: No. 3 Michigan, West. The Wolverines are the hottest team in the Big Ten, winners of nine in a row and coming off a second consecutive Big Ten tourney title by beating Michigan State for a second time this season. This is a team with multiple offensive options in players like Moe Wagner and Muhammad-Ali Abdul-Rhakman. And it is well-coached by John Beilein. On top of that, this is Beilein?s best defensive team in his Michigan tenure that began in 2007-08. Don?t be shocked to see the Wolverines make a deep run.

Best first-round matchup: No. 5 Ohio State vs. No. 12 South Dakota State in the West. It what seems to be a regular occupancy, a few No. 12 seeds always seem to knock off No. 5 seeds. Will the Buckeyes fall prey in what will be their first NCAA tourney since 2015?

Toughest potential second-round game: No. 2 Purdue figures to have its hands full if it ends up meeting No. 7 Arkansas in the second round in Detroit. Flashback to 2016, when the Boilermakers got unceremoniously dumped in their NCAA opener by plucky Arkansas-Little Rock. Like UALR, Arkansas is a quick and athletic team that can attack the rim off the dribble. This isn?t a good matchup for a Purdue that that lacks an athletic front line.

Teams most likely to advance to the Sweet 16: Michigan State and Michigan. The Spartans arguably are the most talented team in the NCAA tourney with guys like Miles Bridges, Jaren Jackson and Cassius Winston, among others. And they no doubt will be motivated after losing in the semifinals of the Big Ten tourney. Want more? MSU has gone 1-2 in the last two Big Dances, so it wants to show it still is a March star. The Spartans open with No. 14 Bucknell and then probably will face No. 6 TCU. No. 2 Duke probably will be waiting in the Sweet 16. The Wolverines are hot and talented, playing as well as any team as the NCAA tourney dawns. The obstacles: No. 14 Montana and then probably No. 6 Houston. Then, No. 2 North Carolina may be looming in the Sweet 16.

Sleeper: With all four schools serenaded No. 5 or higher, there really is no sleeper team. But, let?s go with No. 5 Ohio State. The Buckeyes have one element that is typically needed if any team wants to make a deep run: a super star player in Keita Bates-Diop. He has a smooth jumper and can attack off the dribble.  One last thing: The Buckeyes are playing with house money, as no one expected them to be here. So, there is no pressure on Chris Holtmann?s team. Just have fun!

Easiest path to the Final Four: There is no ?easy? path. But let?s go with No. 2 Purdue in the East, which is considered by most to be the easiest region. Villanova is the No. 1 seed, with Texas Tech No. 3, Wichita State No. 4, West Virginia No. 5 and Florida No. 6. If the Boilermakers can make it to the Sweet 16, you have to like their chances to reach the Elite Eight for the first time since 2000. Purdue has good inside-outside balance and is led by four seniors. And sophomore guard Carsen Edwards is unlike any player the program ever has had, a true end-of-the-shot-clocker player who can score at will from anywhere on the court.

Toughest region: The West, which is home to No. 3 Michigan and No. 5 Ohio State. No. 1 Xavier and No. 2 North Carolina also call the West home, along with No. 4 Gonzaga. And No. 6 Houston is a trendy pick as a sleeper. If the Wolverines or Buckeyes are going to reach the Final Four, they are going to have to earn it.

Toughest draw: Ohio State needs to be careful in the West. The No. 5 Buckeyes are in the dangerous 5-12 game in which a No. 12 seed seems to annually dump a No. 5 seed. In this instance, Ohio State opens with No. 12 South Dakota State, a dangerous foe. This will be the Jackrabbits third NCAA tourney appearance in a row, so they won?t be intimidated by the bright lights of March. Should OSU get by SDSU, No. 4 Gonzaga probably will be looming in the second round. The Zags went to the Final Four last season. Win that, and No. 1 Xavier probably will be waiting in the Sweet 16 in what would be an epic all-Ohio battle.

Best player matchup in first round: South Dakota State?s Mike Daum vs. Ohio State?s Keita Bates-Diop. A 6-9 power forward, Daum is averaging a double-double of 23.8 points and 10.4 rebounds per game and last week was named the Summit League's Player of the Year for the second time in his career. A 6-7 wing, Bates-Diop was the Big Ten Player of the Year, averaging 19.4 points and 8.8 rebounds. Don?t miss this clash.