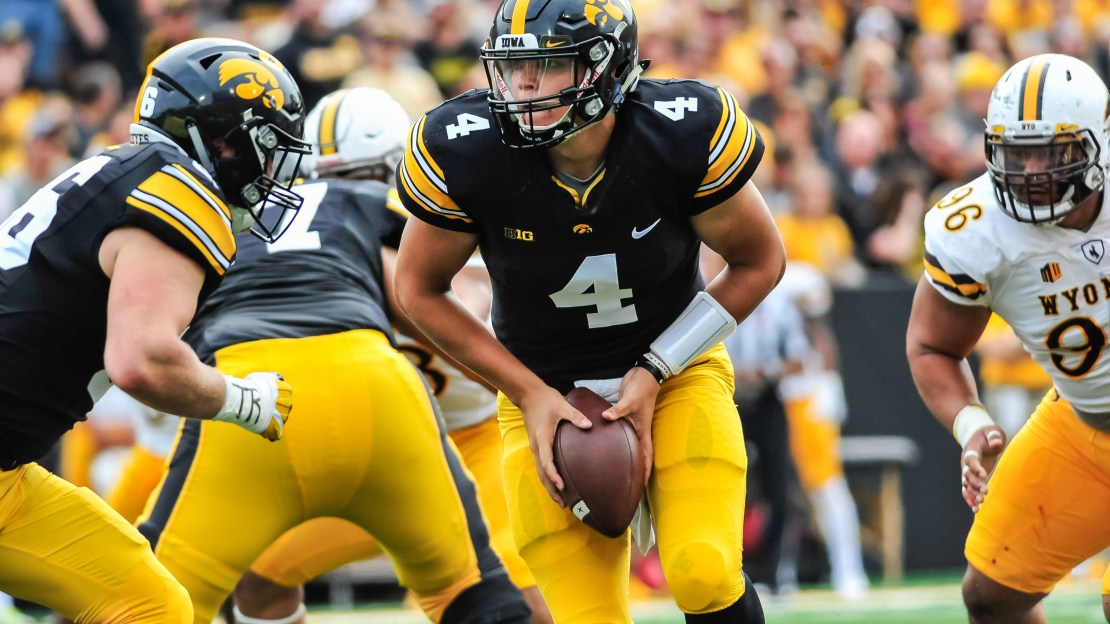 Illinois: The Fighting Illini offense has sputtered in each of Lovie Smith?s two seasons. Maybe the arrival of new offensive coordinator Rod Smith from Arizona will help. But more than anything, Illinois needs better quarterback play. Cam Thomas is the only scholarship signal-caller on campus this spring, as Jeff George, Jr., transferred and Chayce Crouch gave up football. Thomas saw action as a true freshman last season, playing in four games with two starts. He hit 28-of-66 passes (42 percent) for 375 yards with no TDs and five picks while running for 233 yards. Talent will arrive this summer. Keep an eye on incoming freshman MJ Rivers, who has some excited. Illinois also inked Matthew Robinson and Coran Taylor, the highest rated of the three QB signees. Perhaps the Illini could add a grad transfer signal-caller. Stay tuned.

Iowa: The Hawkeyes have a nice one in Nate Stanley, who emerged last year. The 6-5 junior has a big arm, hitting 55 percent of his passes last year for 2,437 yards with 26 TDs and six picks. The backup situation is murky. Tyler Wiegers left as a grad transfer to Eastern Michigan. Redshirt freshman Peyton Mansell and early enrollee Spencer Petras also are in the mix. Here's hoping Stanley stays healthy.

Minnesota: This has been a problem spot for years. And P.J. Fleck knows he has to get it fixed. Demry Croft opted to transfer to Tennessee State. Conor Rhoda has graduated. No big losses. How anemic was the aerial game in 2017? Minnesota had just nine TD passes and ranked 122nd in the nation in passing. Vic Viramontes may be the elixir. He was the nation?s top-ranked dual-threat JC quarterback. He has three years of eligibility and already is on campus. Viramontes is an intriguing prospect who was at Cal for a year before transferring to a JC. He may end up being the guy taking snaps in Dinkytown. Redshirt freshman Tanner Morgan and sophomore Seth Green also are in the mix along with early enrollee freshman Zack Annexstad. This battle will be waged into fall camp.

Nebraska: New coach Scott Frost is a former Nebraska signal-caller who knows a thing or two about offense. He?ll have some interesting options this spring with the primary competitors being sophomore Patrick O?Brien, redshirt freshman Tristan Gebbia, and true freshman Adrian Martinez, a hyped prospect who may end up being the guy. O'Brien is a blue-chipper from California whose time may be now–or not. Martinez is the kid who has Cornhusker fans jacked up. He has the dual-threat skill-set Frost desires, but can he get up to speed?

Northwestern: With Clayton Thorson out recovering from injury suffered in the Music City Bowl win vs. Kentucky, this is a chance for others to impress. Keep an eye on junior T.J. Green, redshirt freshman Andrew Marty, and sophomore Aidan Smith. There will be plenty of reps available, as the staff will be getting a look at the future of the position. If Thorson isn?t ready for the start of the season, who would get the nod in the opener at Purdue on Aug. 30? Thorson is coming into his own and is primed to leave Evanston as an all-time great. He threw for 2,844 yards last season with 15 TDs and 12 picks. It's vital for the senior to get well.

Purdue: Amazingly, senior David Blough already has returned way ahead of schedule from an ankle injury suffered in early November. He?s on the field this spring but is being limited. Junior Elijah Sindelar is out as he recoups from an ACL injury he heroically played through over the last four games, rallying the Boilermakers to a bowl win along the way. What?s it all mean? This is a perfect time for the staff to audition young guns: redshirt freshman Nick Sipe and early enrollee Jack Plummer, a prospect Jeff Brohm raves about. In fact, Plummer may be the future face of the program. Or, he could be the face in 2018. Yes, Brohm likes him that much. But in the end, Blough or Sindelar figure to be the starter. They each played often in 2017 before Blough emerged–and then got hurt.

Wisconsin: The Badgers have a keeper in junior Alex Hornibrook, who could emerge as one of the Big Ten?s top signal-callers this fall. Yes, the lefthander has had issues with interceptions. But he completed 62.3 percent of his passes last year for 2,644 yards with 25 touchdowns and 15 interceptions. The 25 scoring tosses rank second for a single season in school history behind Russell Wilson's 33 in 2011. Sophomore Jack Coan is back as the No. 2 man. Sophomore Kare Lyles in on hand. Keep an eye on true freshman Chase Wolf when he arrives this summer.