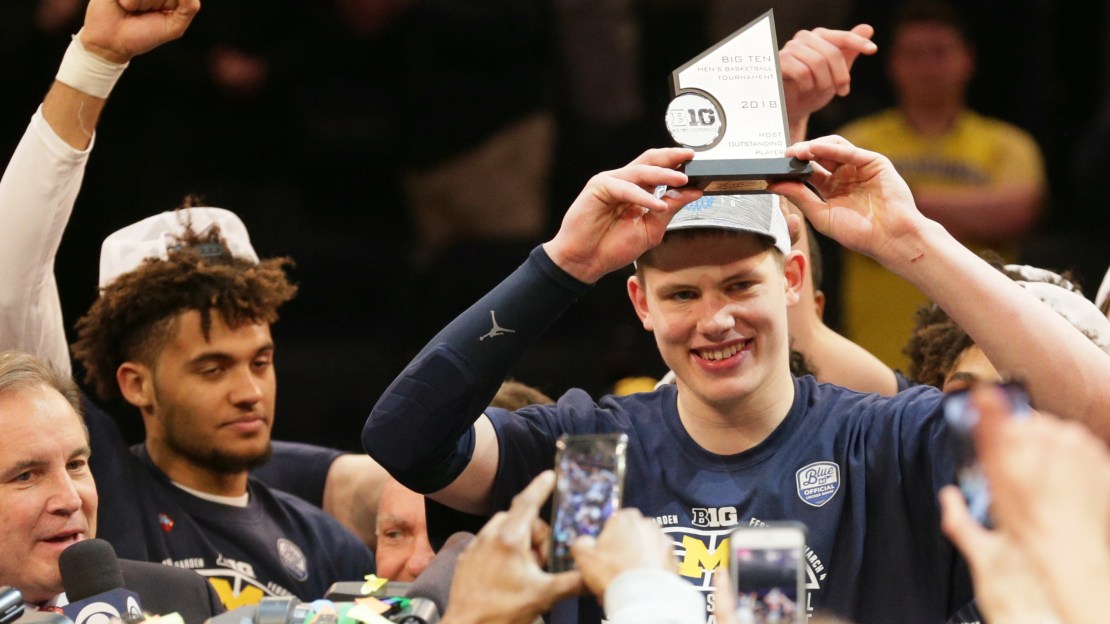 Another Big Ten tourney is in the books, as the conference took the Big Apple by storm in what proved to be an exciting tourney with twists, turns … and a surprise winner in No. 5 Michigan.

Best game: Penn State 69, Ohio State 68. This quarterfinal game took your breath away in what was the best game of the Big Ten tourney. Plucky Penn State, a No. 7 seed, took down No. 2 Ohio State, 69-68, on Josh Reaves' game-winner in the final seconds to advance to the semifinals. It was the third time this season that the Nittany Lions had toppled the Buckeyes. Ohio State was one of the surprise teams in the nation, finishing second in the Big Ten. This was a tough loss, but the Buckeyes still are headed to their first NCAA tourney since 2015. PSU has been a team plagued by inconsistency, which kept it from failing to live up to expectations. But when it is dialed in, this club is difficult to beat.

Best player: Moe Wagner. There were several players with more head-turning numbers, but the Michigan big man played a key role in leading the Wolverines to the summit for a second year in a row, and that counts for a lot. And he was the tourney's most outstanding player, after all. Wagner saved his best for last, notching a team-high 17 points in the final vs. Purdue. Wagner had 15 vs. Michigan State, 20 vs. Nebraska and 11 vs. Iowa.

Best stat line: Penn State's Shep Garner. It came in a loss and his final game in a Penn State uniform, but the sharpshooter saved his best for last vs. Purdue, finishing with a career-high 33 points, on 8 of 11 from the field, including 6 of 8 from distance, three rebounds, one assist and three steals.

Best stat: 1, the number of teams (Iowa, 2001) to win four games in four days at the Big Ten tournament prior to Michigan's back-to-back extended tournament title runs. As a result, the Wolverines' eight straight wins are tied for the longest in event history.

Best performance: Rutgers? Corey Sanders. The 6-2 junior was in a groove in an upset of Indiana, hitting shots from long distance while also attacking the rim with ferocity. It was something to behold. He finished with 28 points, hitting 12-of-20 shots with three assists. Interestingly, Sanders didn?t attempt a 3-pointer. Also have to give a nod to Purdue?s Carsen Edwards, who was sensational in notching 26 points vs. Rutgers and 27 vs. Penn State. He showed why he may be an early pick for 2018-19 Big Ten Player of the Year.

Best shot: Iowa's Jordan Bohannon. After missing two 3-pointers that would have tied the game on Thursday, Iowa was forced to foul Michigan with less than a minute to go. But the Wolverines Muhammad-Ali Abdur-Rahkman missed the front end of a one-and-one. Iowa had one more chance. And Jordan Bohannon drained a looooooong 3-pointer with 16 seconds left to forge a 67-67 tie and force OT. This after he had left the court earlier with an injury. But Michigan came back to win its tourney opener.

Best dunk: Rutgers' Corey Sanders. My, oh, my, Sanders unleashed the most vicious jam yet at the Big Ten tourney. After coming up with a turnover in the first half, Sanders sprinted down court, launched himself, cocked his right arm, cradled the ball and slammed it home. The pro-Rutgers crowd exploded in delight. Sanders did it again late in the game, splitting a double-team to deliver a monster one-handed jam. Can't forget this one, either: Wisconsin's Brad Davison lobbed a perfect pass to Khalil Iverson, who caught the ball in midair with his back to the basket and slammed it home.

Best moment: Moe Wagner and his mom celebrating. Really, you can go with any and all of the celebration scenes. Like, this (water fight!) Or, this. But the moment the tourney's most outstanding player shared with his mother, who came from Germany for the event, was special and what it's all about.

Biggest surprise: Penn State. Yes, Michigan winning as a No. 5 seed is a surprise … but not a shock (Editor's note: Tom actually picked Michigan to win the event in this Feb. 22 article.), given its recent history in this even and the hot streak the Wolverines brought to New York (five-game in streak). So, let's go with PSU. The Nittany Lions arrived as a No. 7 seed, looking to make a push for their first NCAA bid since 2011. To do so, Penn State would have to play without injured big man Mike Watkins. Pat Chambers? team opened with a win vs. No. 10 Northwestern and then took down No. 2 Ohio State for the third time this season. Penn State moved on to the final four on Saturday where its magic ride ended with a loss to No. 3 Purdue. Also have to mention Rutgers. Maybe it was the fact the Scarlet Knights were playing so close to campus, but they played with passion on this grand stage. Rutgers arrived as the lowest-seeded team at No. 14. No worries. The Scarlet Knights knocked off No. 11 Minnesota on Wednesday and then dumped No. 6 Indiana on Thursday before finally succumbing to No. 3 Purdue, 82-75.

Biggest disappointment: Ohio State. The No. 2 Buckeyes came to New York to make a statement and enhance their NCAA seeding. But Ohio State got dumped in its first game, falling to No. 7 Penn State. It was the third time this season that the Buckeyes lost to the Nittany Lions. OSU will enter the Big Dance going 2-3 in its last five games.