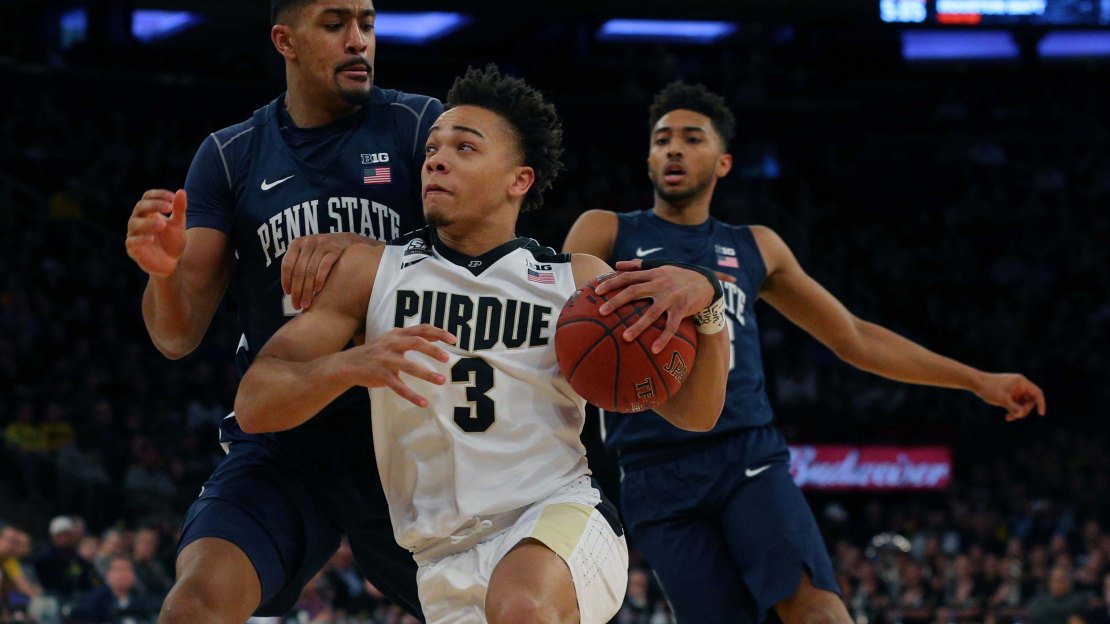 This was an uneven effort by the Boilermakers, who didn?t shoot well. But, Matt Painter?s crew found a way to grind out a win, its fifth in a row since that ruinous three-game skid in February.

Purdue will play in the Big Ten tourney title game for the second time in three years and the fourth time overall. The Boilermakers won the championship when they beat Ohio State as a No. 3 seed, the same seed Purdue has this year.

Best player: Guess who? Carsen Edwards. The Purdue sophomore guard is a sensation who beats foes from long range or off the dribble. Time and again, he bails out the offense when things bog down. On this day, Edwards scored a game-high 27 points, hitting 9-of-18 shots, 6-of-9 3-pointers and 3-of-6 free throws. He also had four rebounds.

Best stat: 52, Purdue?s shooting percentage from 3-point range. The Boilers hit 11-of-21 and 7-of-10 in the second half. That helped Purdue bury Penn State.

Best play: In the second half with Purdue looking to build a lead, Carsen Edwards made an explosive move to blow past defenders and get to the basket for a lay-up to give the Boilermakers a 51-42 lead. Penn State followed with a timeout. It showed the power and quickness of Edwards.

Best moment: Carsen Edwards calms down Matt Haarms. The emotional freshman had just picked up a technical foul, and he was still a little worked up about it. Edwards saw this, and hilariously calmed down his teammate. Watch the two talk about it in the tweet below.

It was over when: With 16:40 left in the game, Purdue clung to a 40-37 lead. But Dakota Mathias hit jumpers on consecutive possessions to push back Penn State. From there, the Boilermakers methodically built their lead, which grew to as much as 18.

Did you see that? There were four technical fouls, two on each team.

First, after Penn State was whistled for an offensive foul late in the first half, Pat Chambers was unrelenting in jawing at the officials and was given a warning. But Chambers kept after it, appearing to be saying ?I deserve respect.? Finally, he was assessed a technical. Vince Edwards hit just one of two free throws. But on the ensuing possession, Carsen Edwards drained a 3-pointer. So, Penn State went from having the ball and a 31-29 lead to trailing 33-31 at the half.

Second, with Purdue up, 44-39, with 14:55 to go in the game, Purdue?s Matt Haarms was wrestling a Penn State player for a rebound. And he was a bit too aggressive-and appeared to say something-resulting in a technical foul. PSU hit just one of two free throws ? and then came up empty on the ensuing possession as Purdue led, 44-40.

Third, with 9:53 to go and Purdue up, 56-44, the Boilers? Isaac Haas and Penn State?s Julian Moore got tangled up and feel to the floor. Each was assessed a T.