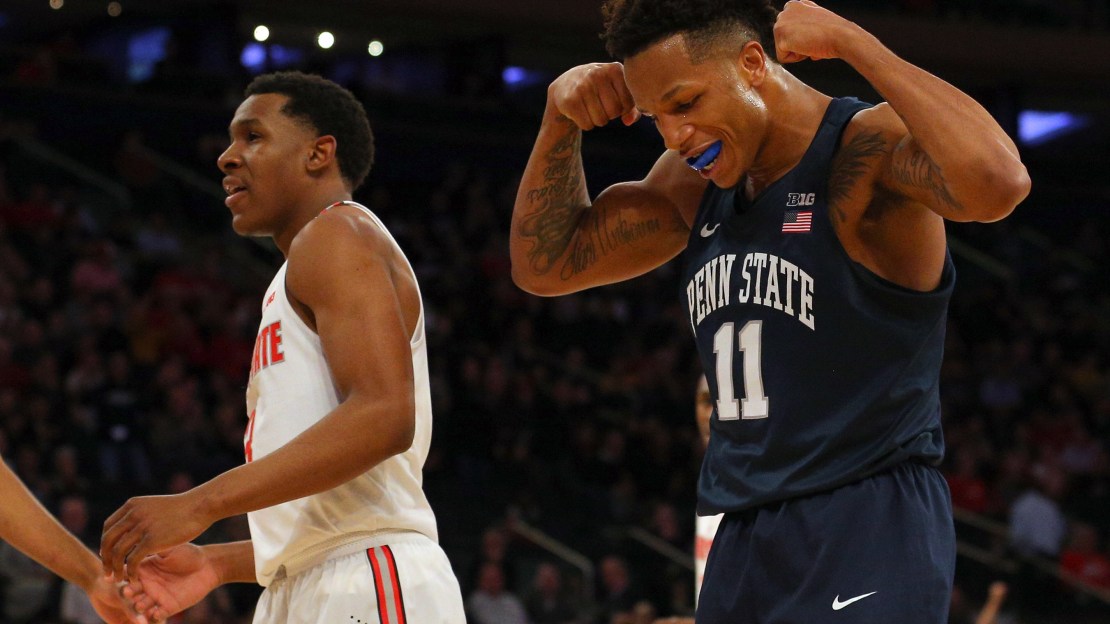 NEW YORK — This one took your breath away in what was the best game yet in the Big Ten tourney. Plucky Penn State, a No. 7 seed, took down No. 2 Ohio State, 69-68, to advance to the semifinals. It was the third time this season that the Nittany Lions toppled the Buckeyes.

PSU has been a team plagued by inconsistency, which kept it from failing to live up to expectations. But when it is dialed in, this club is difficult to beat. And this team is dialed in at NYC. The Nittany Lions had to play tonight, and for the whole tournament, without big man Mike Watkins (knee injury). Didn?t matter.

Ohio State was one of the surprise teams in the nation, finishing second in the Big Ten. This is a tough loss, but the Buckeyes still are headed to their first NCAA tourney since 2015.

Best player: Penn State guard Tony Carr is supposed to be a star. And he played like one tonight, tallying a game-high 25 points. He hit 9-of-17 shots and 4-of-7 3-pointers while also notching six rebounds and five assists in 36 minutes. Ohio State?s Keita Bates-Diop also notched 25 points. But his turnover late proved to be killer for OSU.

Best dunk: This didn?t take long. Penn State?s first points of the game came when Lamar Stevens bolted down an open lane and hammered home a one-handed stuff that rattled teeth. And Stevens followed a few minutes late with another thunderous jam for the Nittany Lions? fifth and six points.

It was over when: Penn State?s Shep Garner forced the Keita Bates-Diop turnover with 17 seconds left. And then Tony Carr hit Josh Reaves, who was breaking to the basket and made an uncontested dunk. This game was tied 11 times and had seven lead changes.

Best tweet: @PennStateMBB gave us a look at The Legion of Blue celebrating the thrilling finish. The team's student body couldn't make it back to New York City on Friday due to weather.

…meanwhile in State College, Pa (due to snow preventing the @LegionofBluePSU to make the trip to @TheGarden ) ????#ClimbWithUs pic.twitter.com/6uCNeVODhB

Best laugh: Baby race. These never get old, and they always provide a few laughs, in addition to plenty of "awws!"