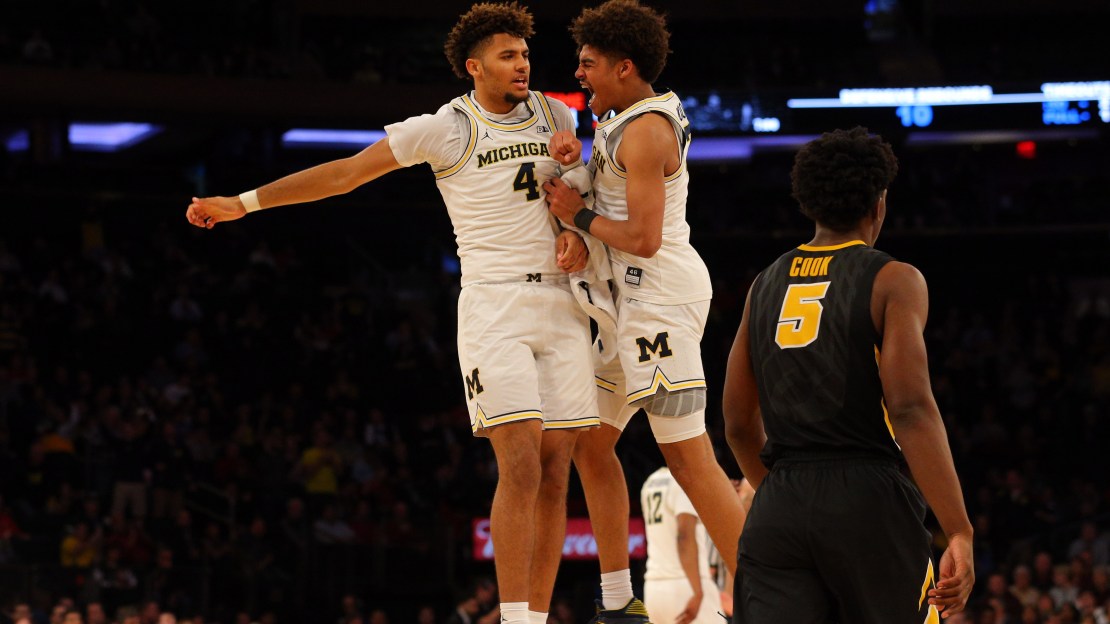 NEW YORK — Michigan was the pick of some to win the Big Ten tourney for a second year in a row. Last year, the Wolverines did it as a No. 8 seed. This year, Michigan is a No. 5 seed, arriving in New York riding a five-game winning streak.

The Wolverines remained hot, taking a 77-71 OT win vs. pesky No. 12 Iowa despite hitting just 3-of-19 3-pointers. The Hawkeyes got to Thursday after dumping No. 13 Illinois in the opener on Wednesday. Alas, Iowa?s season ends, as the program will miss the Big Dance for a second year in a row after making it from 2014-16.

Top star: Michigan's Charles Matthews tallied 16 points, hitting 5-of-10 shots, to go along with eight rebounds in 41 minutes. Hat?s off to the Kentucky transfer.

18, free throws Michigan made, the same number Iowa attempted. (The Wolverines attempted 32, though, for a 56 percent clip.)

Top shot: After missing two 3-pointers that would have tied the game, Iowa was forced to foul Michigan with less than a minute to go. But the Wolverines' Muhammad-Ali Abdur-Rahkman missed the front end of a one-and-one. Iowa had one more chance. And Jordan Bohannon drained a looooooong 3-pointer with 16 seconds left to forge a 67-67 tie and force OT. This after he had left the court earlier with an injury.

It was over when: In OT, Iowa?s Luka Garza hit one of two free throws to give the Hawkeyes a 70-69 lead with 2:33 left. But Michigan?s Duncan Robinson answered with a 3-pointer to give the Wolverines a 72-70 lead with 2:17 remaining. Iowa had a few shots to tie the game with a 3-pointer in the final minute, but it came up short time and again vs. a Michigan team that had Moe Wagner and Muhammad-Ali Abdur-Rahkman on the bench fouled out.

Did you see that? In the first half, Zavier Simpson hit a stunning one-handed, teardrop runner that seemed like it was gonna kiss the roof of Madison Square Garden.

"That's not a teardrop; that's a crying spree."