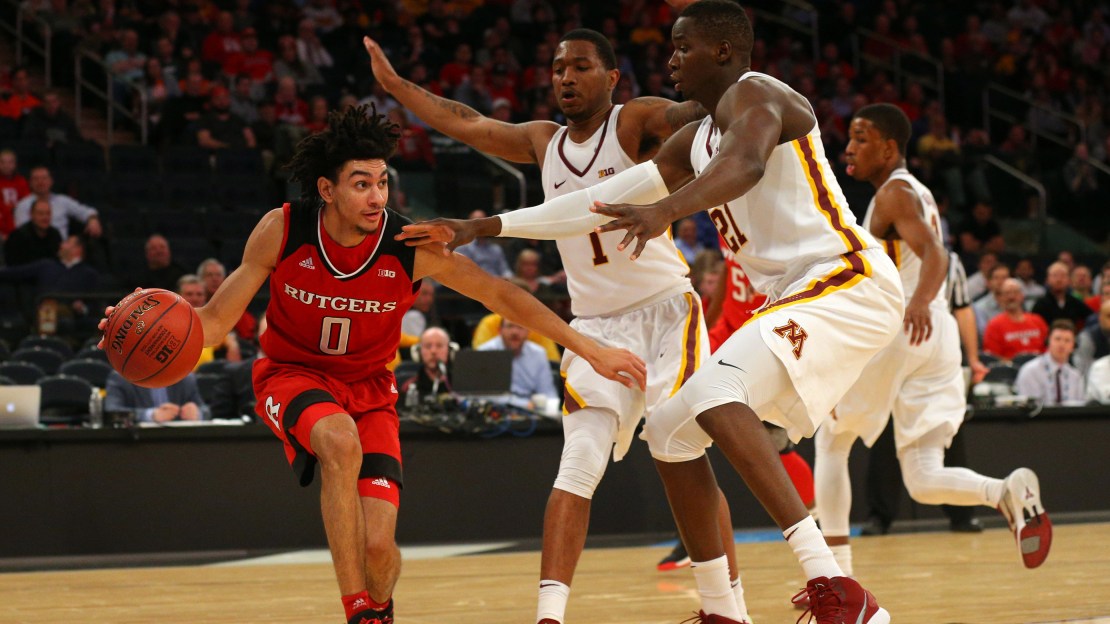 Rutgers may have been the No. 14 seed, but the Scarlet Knights are still alive as they play on what essentially is their home turf, taking a 65-54 win vs. No. 11 Minnesota. Most pundits tabbed Richard Pitino?s squad to be a Big Ten contender.

But Minnesota has endured a tough season because of injury and suspension. The Gophers arrived in New York having lost 10 of their last 11 games and 13 of 15. Minnesota has been to the NCAA tourney just one time (2017) since 2013. Now, the Gophers? season is finished. Rutgers wasn?t any hotter than Minnesota when it got here, having lost 10 of 11 and 14 of 17. But the Scarlet Knights? dreams of dancing remain.

Top star: Rutgers Corey Sanders played like a stud, tallying a game-high 23 points. He hit 9-of-20 shots and grabbed seven rebounds in 35 minutes of action as RU led for 33:06 of the game. Time and again, he hit big shots.

Top stat: 47-28, Rutgers? rebounding advantage. And that led to the Scarlet Knights grabbing a 17-2 edge in second-chance points.

Top shot: With Minnesota trailing by just four points and refusing to go away, Rutgers sensation Corey Sanders hit an impressive jumper from the top of the key to give the Scarlet Knights a 56-50 lead with just under two minutes to go. It was a dagger RU needed take the fight out of the Gophers.

Top dunk, Part 2: Minnesota?s Dupree McBrayer offered up a delicious one-handed slam in transition in the second half that cut Rutgers? lead to 46-42 with 8:58 to go.

It was over when…: Rutgers led by as many as 11 points, but it could never fully shake the Golden Gophers. With 52 seconds left, Rutgers led, 58-52, after a layup by Minnesota's Isaiah Washington. But the Scarlet Knights shut the door from there, hitting five free throws down the stretch with two by Issa Thiam, one by Sanders and two by Mike Williams to make it 63-52 with 29 second left.

Did you see that? The crowd wasn?t large, but it got loud as many Rutgers fans were in Madison Square Garden.

Got loud in The Garden as the @RutgersMBB faithful realized they had an opening #B1GTourney win over Minnesota wrapped up: pic.twitter.com/ozaNSEY7Zw

Notable: For the second year in a row, Rutgers won as the No. 14 seed. It took down No. 11 Ohio State last year in this game.