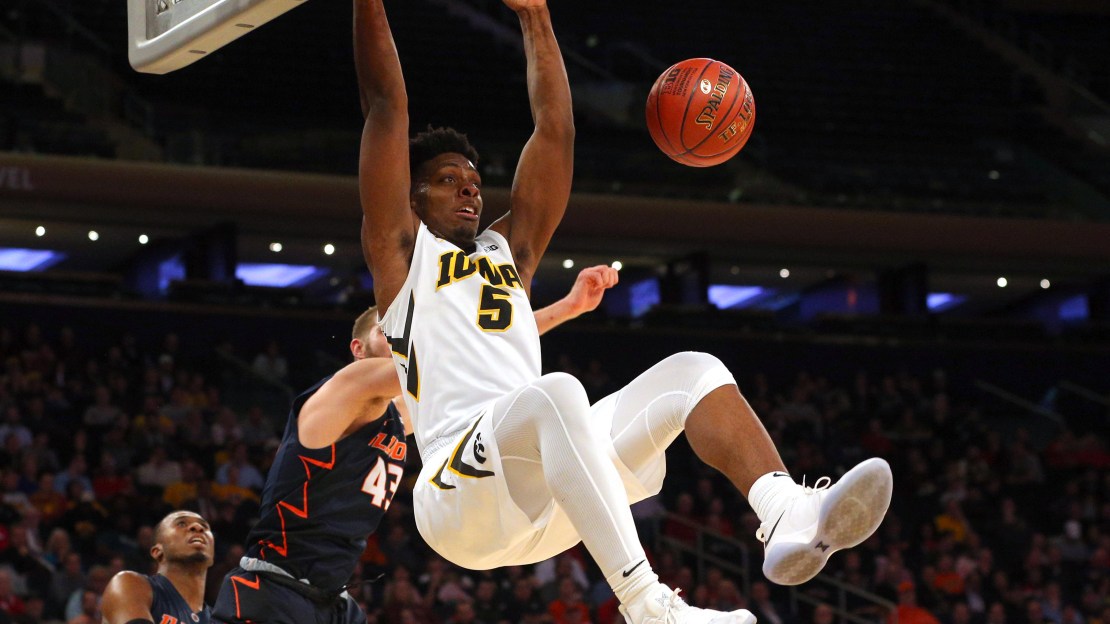 No. 12 Iowa and No. 13 Illinois had the honor of tipping off the Big Ten tourney. And Hawkeyes live another day, taking a 96-87 decision. This is a nice boost for Fran McCaffery?s crew, which has had a largely dreary season.

Up next for Iowa is a game vs. No. 5 Michigan, one of the hottest teams in the Big Ten which is riding a five-game winning streak as it arrives in New York. The lllini head home with a 14-18 mark and will miss the NCAA tourney for the fifth year in a row, as first-year coach Brad Underwood continues to put his stamp on the program. It?s the second time in three years Illinois has finished with a losing mark.

The last time Illinois had a winning Big Ten record? You have to go back to 2009-10.

Top star: Iowa G Jordan Bohannon needed to have a big game ? and he delivered, pouring in a team-high 25 points on 6-of-10 shooting. The super soph also nailed 5-of-7 3-pointers and eight of his free throws. And he had six assists. Take a bow. Full box score right here.

Top stat: 31, points for Illinois? Kipper Nichols, the most in the game and a career high. The 6-6 sophomore hit 10-of-18 shots, 5-of-9 3-pointers and six free throws. Nichols had scored a combined 15 points in the three previous games.

Top shot: With Iowa up just 63-61 midway through the second half, the Hawkeyes? Tyler Cook hit a sweet running one-hander that banked in.

Top dunk: In the first half, Iowa?s Tyler Cook stormed in on the right wing and delivered a thunderous two-handed jam that rattled the backboard.

It was over when …: Iowa was clinging to a 63-61 lead midway through the second half. That?s when Hawkeye big man Tyler Cook hit a running one-hander that banked in ? and he was fouled. Cook missed the free throw but Jordan Bohannon corralled the rebound and drained a three. Illinois called timeout. Just like that, the Hawkeye lead was pushed to 68-61 with 9:50 to go. Illinois? Mark Smith launched an airball on the Illini?s next possession and Iowa?s Luka Garza hit a hoop to make it 70-61, Hawkeyes.

Did you see that? In the second half, Illinois coach Brad Underwood got T-d up for arguing with the officials. No doubt, Underwood is one of the fieriest coaches in the Big Ten.

Notable:  Iowa's 96 points tonight is a school record for most points in a Big Ten Tourney game… Iowa now has scored 50+ points in the second half for the fifth time in the last nine games and eight times total.