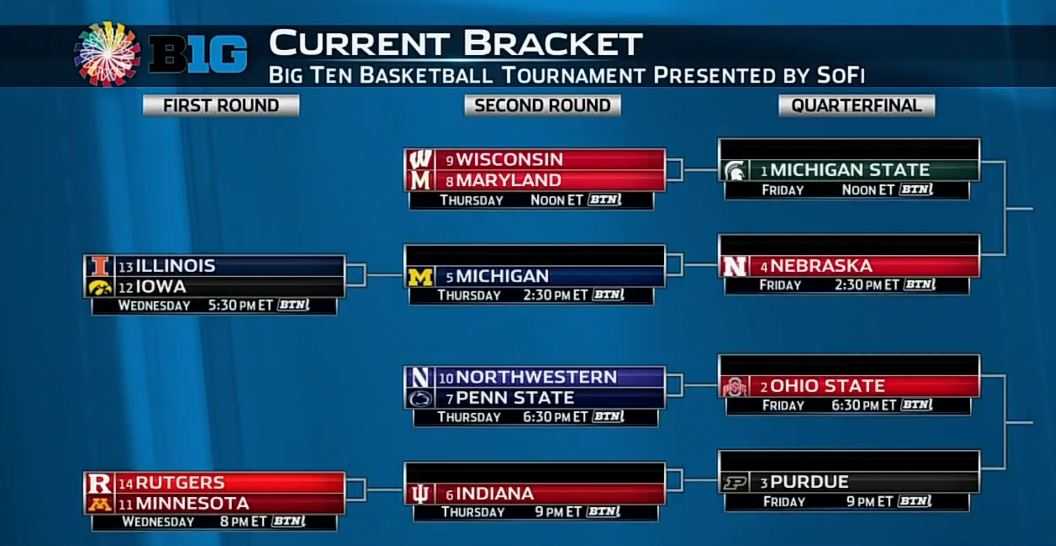 Ohio State and Purdue tied for the second place in the regular-season standings, with a 15-3 record, with the Buckeyes earning the No. 2 seed based on a head-to-head victory vs. the Boilermakers. Nebraska earned the No. 4 seed and the final double-bye of the tournament with a 76-64 result vs. Penn State on the last day of the regular season. The Huskers tied with Michigan at 13-5, but Nebraska claimed the fourth seed by virtue of its head-to-head win vs. the Wolverines.

The matchups are set. Here is your 2018 Big Ten Tournament Bracket: pic.twitter.com/7rKfNOmrlO

The tournament begins on Wednesday with two opening-round games of No. 13 Illinois vs. No. 12 Iowa at 5:30 p.m. ET followed by No. 11 Minnesota vs. No. 14 Rutgers. BTN will broadcast games on Wednesday, Thursday and Friday, with CBS set to televise the semifinals on Saturday and championship game on Sunday.

All-session tickets currently remain available at the Madison Square Garden box office, Ticketmaster.com or charge by phone at 800-745-3000. Single-session tickets will go on sale beginning at Noon ET on Monday.

For more information on the Big Ten Men?s Basketball Tournament, go to www.BigTen.org/MBBT.