This Maryland alum's poetry is an out-of-body experience: BTN LiveBIG 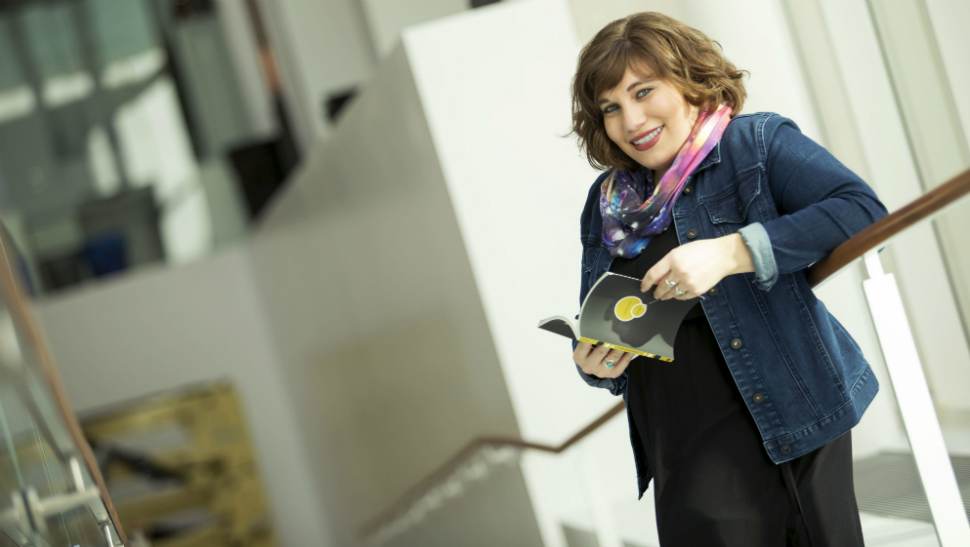 Marlena Chertock?s poetry is full of contradiction. Through two books (On that one-way trip to Mars and Crumb-sized), she writes about her body?s skeletal dysplasia – what many call dwarfism – in sci-fi-laden, outer space settings that offer escape, comfort or acceptance. It?s a expansive scope that belies her physical stature.

Chertock is a graduate of the University of Maryland?s Philip Merrill College of Journalism and a former resident of its Jiménez-Porter Writers? House, Chertock writes for both business and pleasure. As a digital content specialist for the Society for Science and the Public, she explores the cutting edge of STEM. Her literary work is featured in festivals and journals – and other upcoming appearances –  bringing awareness to what is largely an invisible disability.

BTN LiveBIG spoke with Chertock about her books, her love of space and the influence of Maryland on her work.

BTN LiveBIG: In your books, you write about your personal experiences through the lens of space and non-human objects and constructs. How did you find your way into using this device?
Marlena Chertock: I've kind of always just been really in love with space. I remember being really young and my dad waking me up in the middle of the night to go out and see eclipses or comets. When I'm in the midst of a really bad pain attack or something, it helps me to think of scale – like I'm one person on the Earth, on a rock floating through space. Kind of thinking of it in those terms helps me put it in perspective, if that explains it. It's kind of a coping method.

BTN LiveBIG: It sounds similar to the way some people try to ground themselves, if you will, during an anxiety attack.
Chertock: Yeah, I think that's a really interesting way of comparing it. Something I actually didn't think about, but very similar.

BTN LiveBIG: Poetry, for a lot of people, is not that accessible but it allows a universal way of speaking about experiences that are not universal for most people. Is that what drew you to the form?
Chertock: I've always just been writing. Ever since I was a kid, it started off with short stories and things of that nature. In high school and college, it really evolved into poetry.

And I think partly because I've always been a reader. I just was reading a lot of really amazing poets like Patricia Smith and Tracy K. Smith, tons of fabulous writers. Being able to express something so vast in such a small space is really interesting to me and really exciting. I think some of the things that I write wouldn't work as well in a short story or a novel.

BTN LiveBIG: Did you specifically set out to write about the physical condition you have or was it more like, "I want to write about space" and you write what you know?
Chertock: I think for these two books, it was on the forefront of my mind. I didn't want to hide, and I kind of wanted to show a sense of the invisible illness and chronic pain because it can be so invisible to other people, but something that somebody experiences [and] is so real. It was definitely on the forefront of my mind to really get into the nitty gritty of what pain is and how do you describe something like that to somebody else, how do you try to get them to understand it.

I guess in terms of disability, there are so many ways for somebody to be disabled, and just sharing my voice and what it means for me can help other people understand and make it less of a scary thing.

BTN LiveBIG: Do you see writing as a form of advocacy?
Chertock: I think writing is sort of always political. In that way, yes. I think you can't really get around it. Whatever you're choosing to share is political in a sense.

BTN LiveBIG: You are also a writer with The Society for Science and the Public. What excites you about that work?
Chertock: It's really cool. I'm very glad that I get to write for my day job, too. It's different enough that it's not wearing me out about writing. I get to interview alumni of our science fairs. They're inventing medicine of the future, they're creating apps. They're teaching other people to code. They're making their own companies. They're doing incredible things and making me feel like I haven't done anything, but it's just fascinating to really learn about the next generation of STEM. It's in my in own interest, too, just because I happen to like STEM and space and science.

BTN LiveBIG: Do you see areas in which the STEM fields need to become more accessible to everybody?
Chertock: Yeah. I think that's the really important question. In a way, science can be accessible to everybody. That's the overall hope and goal. Some things that we do at the Society specifically try to address that with some of our grants. We want to specifically reach out to underserved students, students of color, in poor areas, things of that nature. In terms of, specifically, disability I think universities and classrooms have to be made a little more accessible, whether it's having an ASL interpreter or lab tables – making them lower for people with wheelchairs or something. We're just very behind the times in society, so science kind of followed that too.

Then again, there was a competitor several years back in one of our fairs that had a form of dwarfism and had so many spine surgeries throughout his childhood and that was the science fair project he worked on: a way to improve spinal cord surgeries. He used his own experiences to really inform his science.

BTN LiveBIG: How did the University of Maryland helped set you on this path you're on?
Chertock: Well Maryland has a really great living-learning program called the Jimenez-Porter Writers House. I was a part of that for two years when I transferred in and their director is just really incredible and really believes in the students and nurturing young writers. She brings in speakers and we create a chapbook and have small workshops that just nurture our writing. She just gives us the free time to learn what it is to be a writer. We read people from all over the world and they came in to speak. That's really crucial, to have that kind of diversity of reading.

BTN LiveBIG: The title of the most recent book seems very much about leaning into the condition that you have and reclaiming it, in a sense. ?Crumb-sized? was something a schoolyard bully had called you –
Chertock: He had actually said, "Oh, you're smaller than a crumb." Then it kind of blossomed from that. Whatever kids say just sticks with you. Bullying and teasing, and it just goes into the larger discussion we're having now in society of bullying and guns and mental health and all of that. That was something that really stuck with me and takes time to get over, and then showing that, "Yes I am very short and yes, I have chronic pain and things that make it a little harder for me to get around, but here's everything else I do even with all of that."

BTN LiveBIG: Are there other poets you enjoy that are using space in the imagery of their work?
Chertock: Yeah. One I'm thinking of is Christina M. Rau. Tracy K. Smith, I just really love her book.  Really humanizing. Oh, Fatimah Asghar. She wrote something about Pluto bypassing the orbits of the other planets for a year.* It's very much a persona poem. She gave such a voice to the planet. It's great if you haven't read it. Like, "You think I'm small and not even a planet? Well let me tell you a thing."

BTN LiveBIG: I can see why that would resonate.
Chertock: Yeah. It's a great one.**

* While the language in the poem precludes us from linking to it here, Google should be able to help you out if you are so inclined.
** She?s not wrong.