No. 2 Michigan State pulls away from Illinois on Senior Night, clinches share of Big Ten crown 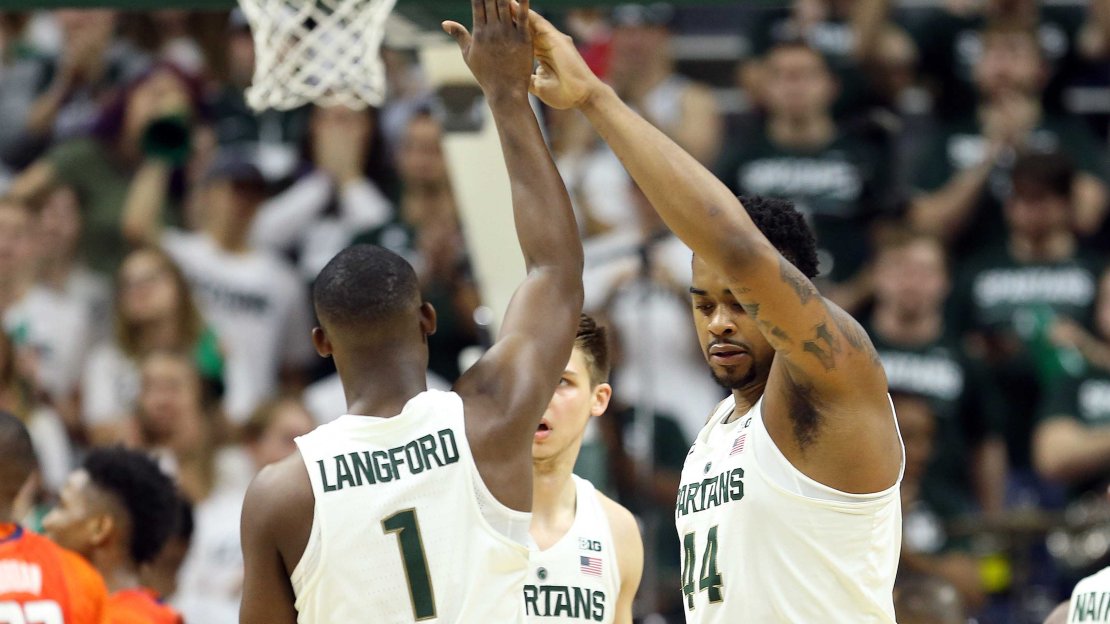 Bridges scored 19 points, leading No. 2 Michigan State to an 81-61 win over Illinois on Tuesday night to seal a share of the Big Ten championship.

The Spartans (27-3, 15-2 Big Ten) have won 11 straight and can claim the conference title outright if they win at Wisconsin on Sunday.

Bridges turned down a chance to make millions in the NBA this season to be a college sophomore in part to chase championships, and now he has one.

"That's why I came back," he said. "Memories that will last a lifetime."

It is clear, though, he's not satisfied with a Big Ten title.

"We're not done yet," Bridges told the Breslin Center crowd after the game.

"It's one of those years, I'm not satisfied with that one," Izzo said.

Raise to the rafters! ?

The Fighting Illini (13-16, 3-13) were coming off a win over Nebraska and looked like they were building momentum, competing well enough to trail the Spartans by just three points at halftime.

Michigan State dashed their hopes of pulling off an upset by opening the second half with a 12-1 run to take control and went on to build 20-plus-point leads.

"They don't have any weaknesses," Illinois coach Brad Underwood said. "I think they're really capable of winning the whole thing."

The cushion allowed Izzo to put his three seniors in and out of the game in the final minutes. That gave each of them an opportunity to kiss the school's logo at midcourt and get an ovation from the crowd, following a tradition Shawn Respert started in 1995 during Izzo's final season as an assistant under Jud Heathcote.

It was a feel-good night on a campus still reeling because of a crisis over how the school handled allegations against disgraced former sports doctor Larry Nassar . An ESPN report has also stirred Michigan State's basketball and football programs by questioning how Izzo and Mark Dantonio have dealt with allegations against their players.

"I hope you enjoyed this team and I hope they brought a little bit of a bright light," Izzo said to fans during a postgame ceremony that included raising a Big Ten title banner.

Joshua Langford had 16 points, Cassius Winston scored 12 and Jaren Jackson had eight points and five blocks for the Spartans.

Illinois' Leron Black scored 20 points and Trent Frazier had 14 points on 4-of-13 shooting.

Illinois: The young team has experienced growing pains that may serve the program well next season, when it returns almost every player on the roster.

"We're growing every day," Underwood said. "We have one senior. We have two scholarships open so we could grow the program with the addition of some recruits. We signed what we think is an elite point guard (Ayo Dosunmu), one of the best in the country."

Michigan State: Despite clinching a share of the conference championship, the Spartans have a lot to play for with an outright title at stake against the Badgers and a chance to improve their seeding for the NCAA Tournament.

The @MSU_Basketball seniors participated in one of the best traditions in sports during a special senior night: pic.twitter.com/xKRzJpmkAv

Illinois: Hosts Purdue on Thursday night and on Sunday plays at Rutgers, where the Illini will have their last chance to win a road game this season.

Michigan State: Wraps up the regular season at home against Wisconsin on Sunday, shooting for its first outright title since 2009 and aiming to improve its postseason seeding.

"We have other things to accomplish," Izzo said.