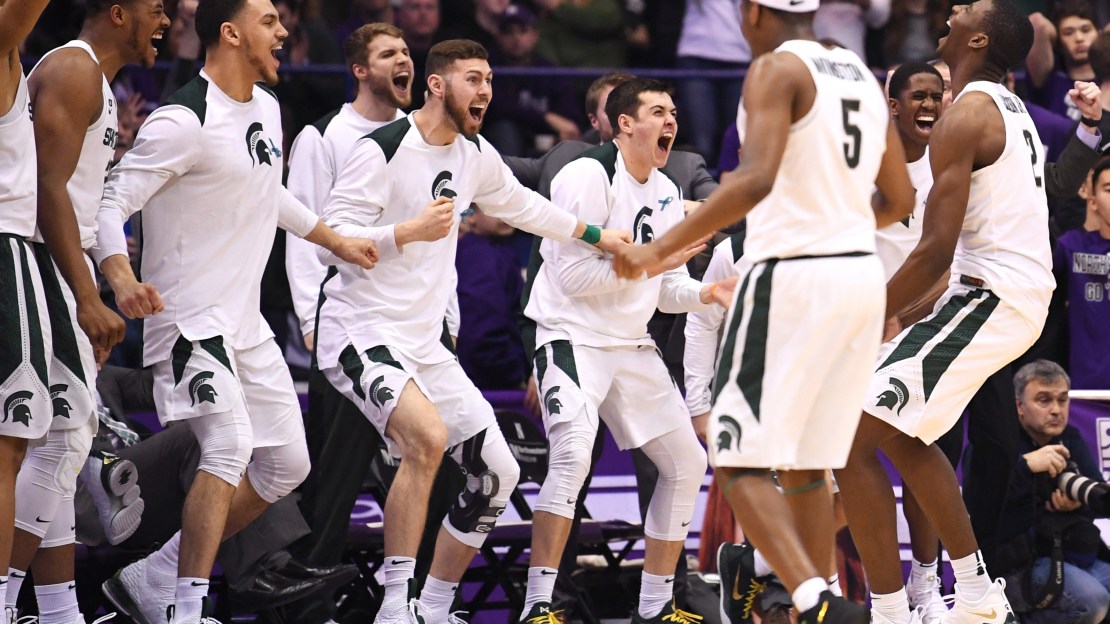 (AP) Michigan State got the help it needed. The second-ranked Spartans now control their own destiny in the Big Ten regular-season race.

All they must do is close the deal in their remaining two games to win the title outright.

The first of those games comes Tuesday in the home finale against Illinois.

The Spartans, who play at Wisconsin on Sunday, trailed Ohio State and Purdue in the standings 10 days ago. But the Buckeyes lost their last two games while the Boilermakers endured a three-game losing streak, including a stumble in East Lansing.

Michigan State (26-3 overall, 14-2 Big Ten) carries a 10-game winning streak into their matchup against the struggling Illini but needed a historic rally at Northwestern on Saturday. They trailed by 27 late in the first half but held the Wildcats to 11 second-half points in a 65-60 win, the biggest comeback in Big Ten history.

"I'm ecstatic by the comeback and I'm ecstatic by the fact that we showed some character," coach Tom Izzo said during the postgame press conference. "They were shaken a little bit. They haven't gone through that before. Nobody at Michigan State has ever been down 27 and come back and won, so I can't expect those guys to."

Point guard Cassius Winston was the catalyst, sparking a run of 24 unanswered points and finishing with 17 points, a career-high nine rebounds and seven assists.

"I've always known Cassius was big-time," sophomore forward Miles Bridges told the Detroit News. "He shows up when we need him. Going down the stretch we always get the ball to him."

Other than a 30-point blowout of undermanned Minnesota, Michigan State has needed clutch plays down the stretch to keep the streak alive. The last six victories besides the outing against the Gophers were decided by an average of 4.7 points.

Illinois (13-15, 3-12) has won just three of its last 13 games. One of those victories was Sunday, when it edged Nebraska 72-66 behind junior forward Leron Black's career-high 28 points. That avenged an earlier one-point loss to the Cornhuskers.

"Huge night for Leron," Illinois coach Brad Underwood said. "That was our game plan going into this, to really try to exploit and get him the ball, get him a lot of touches. Everybody got to see how Leron's game has expanded."

Black is averaging 22 points during the last three games.

Black scored 12 points and fouled out the first time the Illini met Michigan State this season. Bridges poured in 31 points in an 87-74 Spartans victory on Jan. 22. Michigan State overcame 25 turnovers by shooting 68.2 percent from the field.

"We had the most turnovers in a decade and our best field goal percentage in a long time," Izzo said after the first meeting. "I know it doesn't add up, but somehow it did for us."