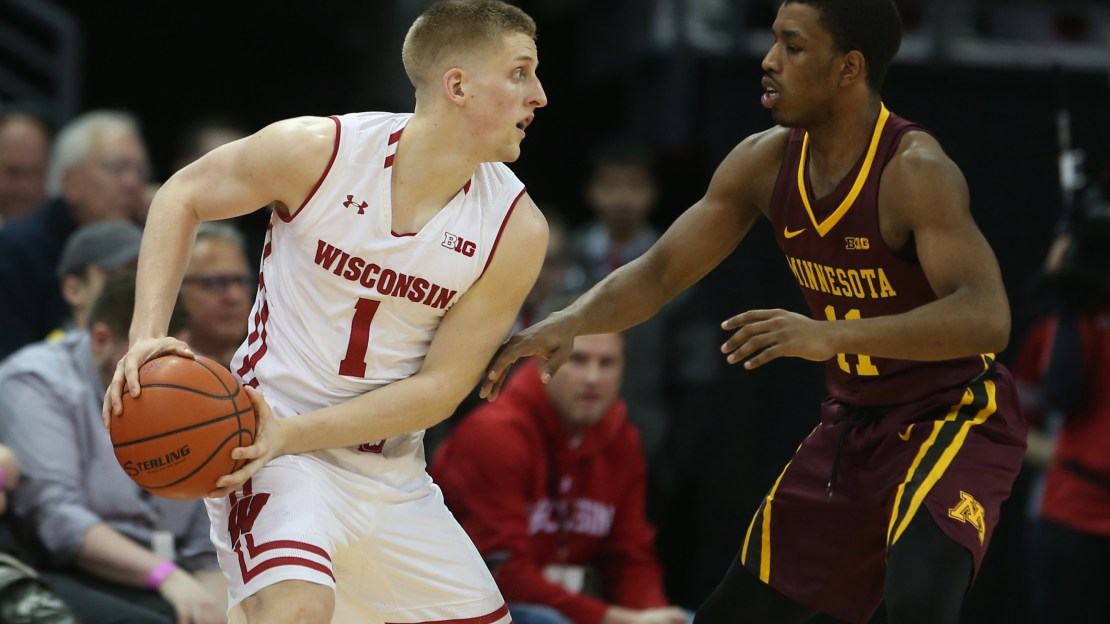 (AP) Wisconsin made stops and hit their 3s down the stretch of a tight game.

The hard lessons from a challenging season might be finally paying off for a young team.

Brevin Pritzl scored 20 points, including two 3s in overtime, Ethan Happ led a defensive resurgence over the final 10 minutes and hit the game-tying bucket in regulation and the Badgers beat Minnesota 73-63 on Monday night.

"I think they're becoming more consistent," coach Greg Gard said. "Typically when you have less experience, you're going to have ups and downs."

Consider this game a huge confidence-builder for Wisconsin, which starts three freshmen.

It helps to have a junior like Happ to lean on for critical shots.

Happ finished with 10 points after going scoreless in the first half, hitting a layup with 5.2 seconds left in regulation for a 59-all tie.

"We've got to regroup," coach Richard Pitino said. "That was very devastating."

Jordan Murphy had 16 points and 11 rebounds before fouling out to lead Minnesota. The Gophers lost a seven-point lead with six minutes left in regulation and went without a field goal for a seven-plus minute stretch from the second half into overtime.

Pritzl opened the extra period with a 3 from the wing. Wisconsin then capitalized on Minnesota miscues later at the other end as Happ had a steal and drew an offensive foul on back-to-back possessions.

The Badgers scored after each mistake to extend to an eight-point lead with 2:12 left.

"We got totally worn down at the end. We made some crucial mistakes," Pitino said.

Michael Hurt had career highs of 15 points and eight rebounds for Minnesota, while Nate Mason scored 11 on 5-of-18 shooting.

Three-point shooting gave the Badgers a 35-34 lead at halftime despite a scoreless first half from Happ, who didn't pick up his first bucket until 17:32 of the second half. Brad Davison finished with 19 points.

Minnesota: Picking up his NCAA-leading 22nd double-double of the season, Murphy has been a bright spot in what has otherwise turned into a dismal season for the Gophers. The junior has also shown some range with his shot after hitting an open 3 from the wing in the second half for a 58-51 lead with 5:58 left. It ended up being Minnesota's last field goal until early in overtime.

Murphy is 3 of 3 from the arc over his last two games after not attempting a 3 during the previous five.

Wisconsin: It's hard to hold Happ scoreless, but Minnesota did just that in the first half after throwing double teams at the 6-foot-10 forward from different angles and at different times during the possession. Happ, who was averaging 18.3 points, had scored at least 21 points in three straight games coming into the night.

Hurt played a career-high 43 minutes, helping to fill the void in the frontcourt in part left by the season-ending right shoulder injury to Amir Coffey.

"I told him before the game, `You've got to be aggressive,'" Pitino said. "He listened."

Trainers appeared to treating guard Nate Mason's right leg after he missed an off-balance layup at the end of regulation and fell to the floor. A replay appeared to show that Davison's left foot may have made contact with Mason on the drive. Officials did not blow the whistle, though Pitino insisted that Mason was fouled.

"Coach challenged us – we had to get stops … That gave us the opportunity to get into the game." – Pritzl on the team's late-game defense.

Wisconsin has won nine of its last 10 overtime games, the only loss in that stretch coming against Florida in the NCAA Tournament regional semifinals last season.

Minnesota: Hosts Iowa on Wednesday to wrap up the home schedule.