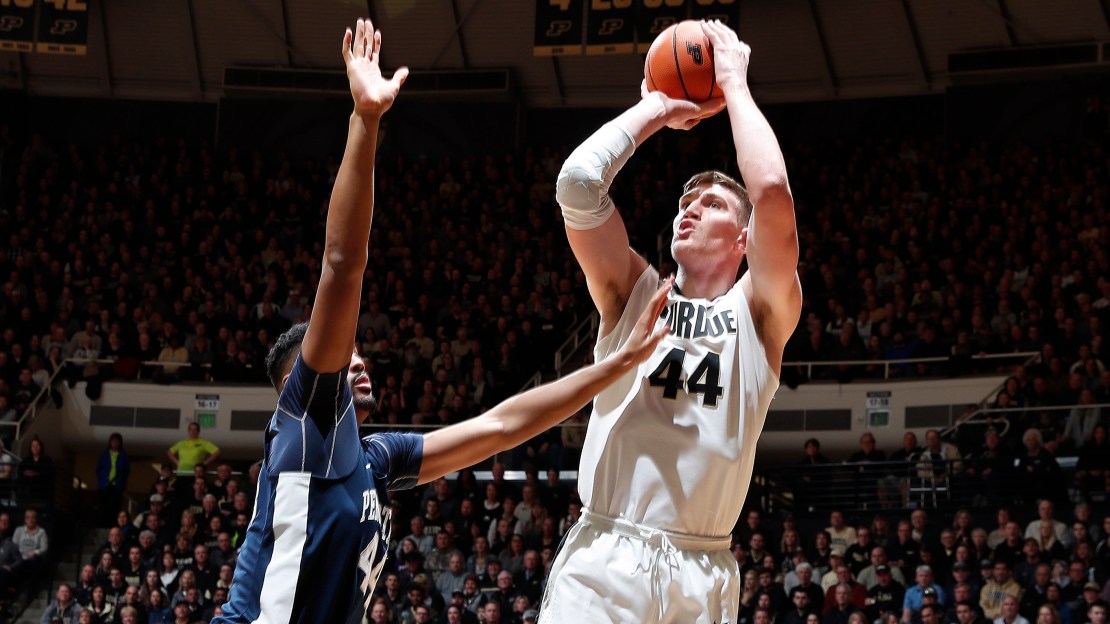 It?s crunch-time in the Big Ten, which enters the final week of the regular season before the league tourney starts in New York on February 28. How does the Big Ten shape up in the chase for NCAA bids? I caught up with Jerry Palm of CBSSports.com to get his insights.

Q: Michigan State and Purdue seem to be in good shape for high seeds. Who is better positioned to get a higher seed?
A: Michigan State and Purdue are playing for high seeds; Top-10-in-the-country-type of seeds. But they both-Michigan State more than Purdue–suffer from a lack of quality wins because the league doesn?t give them to you this year. And the top three teams in the Big Ten (MSU, Purdue, OSU) only played each other once apiece. It was the worst possible conference schedule for those three teams in terms of trying to build a big resume.

But Purdue got some stuff done outside the league that the others did not. Michigan State did not play their usual schedule. They did beat (North) Carolina but lost to Duke. Normally, you can count on Michigan State playing several good non-conference games, but that didn?t happen this year.

Q: What about Ohio State?
A: Ohio State struggled early on and didn?t get good wins outside the league, but obviously has had a good conference season. They lost a couple of road games this week, but they beat Purdue earlier. Ohio State is probably more of a middle-of-the-Top-25 team as opposed to Purdue and Michigan State. We will see what happens in the conference tournament. If one of those three beats the other two, that would be a big boost, regardless of who it is.

Q: What about Michigan?s resume?
A: Michigan is a middle-of-the-bracket kind of team, maybe borderline Top 25. It depends on what they do in the conference tournament. But Michigan lacks quality wins. That?s the problem for just about everyone in this league. But they did win at Texas, which is good. And they won at Michigan State. The quality wins they have are road wins, so that?s a big deal After Michigan State, Purdue, Ohio State and Michigan, there isn?t much.

Q: What about Nebraska and Penn State?
A: Nebraska hasn?t got much. Penn State has the sweep of Ohio State, but played a terrible non-conference schedule and took a couple of bad losses. They just don?t have enough to make up for it right now. Nebraska?s loss at Illinois is its worst loss of the year, their first Quadrant Three or worse loss. It was a bad time for that. They beat Michigan at home, but that?s it. And it?s just not enough. Unless one of those two teams makes a strong run in the Big Ten tournament-not just winning games, but beating teams that help you-there really isn?t much for either one of those. I wouldn?t hold out much hope for either one of those.

Nebraska and Penn State play each other at the end of the regular season in Lincoln. That?s basically an elimination game. If they both aren?t eliminated already, the loser of that game pretty much has to win the conference tourney to make the NCAA field because by the time you get enough good wins, you?ve won the conference tournament.

Q: Does Indiana have a shot?
A: I haven?t thought about Indiana ever. Indiana is 16-12, 101st in the RPI, 0-4 against Quadrant One, lost at home to Ft. Wayne and Indiana State. Yea, there is nothing there.

Q: So, just four Big Ten teams will make the NCAA tourney?
A: Probably, barring a run to a championship from someone else.

Q: What is Purdue?s ceiling?
A: It is higher than Michigan State?s because of what they did in the non-conference. But the loss to Wisconsin is just egregious. It probably cost them a No. 1. It isn?t a Quadrant Three loss yet, but it will be. I don?t know that they can get back to a No. 1 seed (Purdue was in the first Top 16 reveal). But I think they can get higher than Michigan State. Purdue picked up some good wins outside the conference schedule. That?s the difference. To be a No. 2 seed, they need to quit losing to bad teams and get some help. I have Purdue as my No. 8 overall today, the last of the No. 2 seeds.

Q: What is the ceiling for Ohio State?
A: How high? Probably a No. 3 seed.