Minnesota is home to global experts on human rights. Here's what one of them says we should be focused on now: BTN LiveBIG 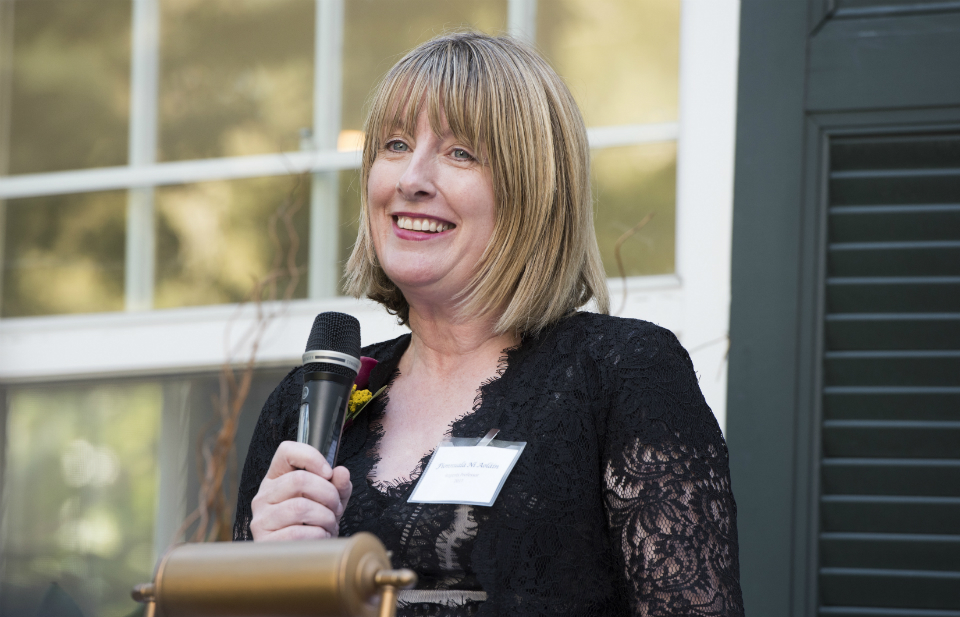 Dr. Fionnuala Ní Aoláin has spent 30 years embedded in conflict zones whether living, studying or advocating within areas where the fight against terrorism is often at odds with the protection of human rights.

The battles are familiar and never-ending. And yet, she remains hopeful.

?When things look the worst is when the dawn breaks,? says Ní Aoláin. ?I do genuinely believe that we are on the right side of history.? 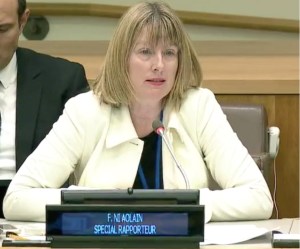 Born in Galway, Ireland, Ní Aoláin is the faculty director of the University of Minnesota Law School?s Human Rights Center as well as the co-founder and Associate Director of the Transitional Justice Institute at the University of Ulster in Northern Ireland. She has been a visiting fellow or professor at Harvard, Princeton, Columbia and Hebrew University in Israel and the author or co-author of seven books on human rights law within war zones or in times of crisis. All of this barely touches on the depth and breadth of her experience with human rights law; she is considered one of the world?s leading experts on the topic.

In August 2017, she was appointed the United Nations? special rapporteur on the promotion and protection of human rights and fundamental freedoms while countering terrorism. It is her mission to travel to countries where human rights may be under threat due to the ways those countries are fighting terrorism.

In an interview with BTN LiveBIG, Ní Aoláin talks about which countries she will focus on during her three-year stint with the UN, why Minnesota is particularly suited to her work and how the average person can participate in this activism – all while keeping the stresses of the work at bay and hope in regular supply.

BTN LiveBIG: Your work is primarily concerned with the protection of human rights within counterterrorism efforts. I'm curious about what areas of the globe you're most concerned with right now.
Dr. Fionnuala Ní Aoláin: In the spring and May, I will be visiting France and Belgium. One of the reasons I prioritized two European countries early on in the visit is, in the first instance, obviously a number of European states have experienced significant terrorism threats and violence in the last couple of years. The result has been that in many of those states, but in France in particular, the government has taken some very significant legal and administrative measures to address terrorism in many ways.

I have deep concerns that those measures are really not consistent with their human rights obligations, but in the long run I think repressive counter terrorism measures don't keep countries safe. They can actually instill the cycle of violence that ends up producing more violence.

The U.S. is on my list of priorities. Other countries that I've highlighted include Russia, to which I've sought an invitation, but the government has indicated they would not be able to host at this point, it?s – in a way – code for ?they don't want to.? But, as a result of that, I've also looked at visiting a number of countries in the Russian sphere of influence. I've asked to visit both Kazakhstan and Tzatzikastan and those are two countries that have accepted an offer of invite from the mandate.

BTN LiveBIG: What kind of models have there been that place justice in a central role for fighting terrorism?
Ní Aoláin: I would say states have struggled consistently to address to counter terrorism in a rights-compliant way. It's always a challenge.

Ultimately, the place I think where we saw a good example, if you want to take an example that's close to my own heart and where I grew up, is Northern Ireland. Northern Ireland has 30 years of state and non-state acts of violence. Ultimately, in order to address that conflict, the state had to, first of all, address the conditions that produced the violence and did so in a comprehensive peace agreement that was signed in 1998 that addressed all kinds of issues, including socioeconomic rights, protection for individuals, reform of the police and the judiciary and the institutional structures of governance which had been purely discriminatory to a minority community over many decades.

Also – and this is one of the places where I would commend the British government for its practices – even as [the UK] engaged in robust counter terrorism, its courts were always active and open so you had free and independent judiciary that called the state to account when they failed to observe both the national common law protections that exist as well as international protections.

MINNESOTA: A NEXUS FOR HUMAN RIGHTS IN THE U.S.

BTN LiveBIG: How have recent U.S. efforts to fight terrorism measured up on a human rights and justice scale?
Dr. NiAoLain: One thing to say is although the U.S. remains highly vigilant to the challenge of what we might call homegrown terrorism, statistically and obviously as compared to other countries, the U.S. has experienced much less exposure to that phenomenon.

One of the reasons we have to ask is why that is the case? One of the success stories of the United States have been the integration of its many diverse communities into the body politic and people feeling that they are Americans.

It?s not an anti-terrorism measure, but most successful measures of societies that prevent violent extremism and terrorism within their borders are, of course, healthy democracies and integrated multi-ethnic societies. I think the U.S. is to be commended.

I remain extremely concerned about the rise of extremism in the United States. In particular, obviously, the UN and the High Commissioner for human rights has noted in recent months his deep and profound concern at the riots and outright Nazi ideologies in the United States. Those are breeding grounds for extremism and of course it's deeply concerning.

So the university itself just has had this long standing commitment to working with international and global institutions, which made it a really attractive place for me.

The second thing was that there's a really tight-knit and sort of significant international human rights community in the Twin Cities. The leading torture rehabilitation center in the world is here, which is The Center for Victims of Torture. The Advocates for Human Rights, a global NGO working on issues of human rights, mostly civil and political rights, is based here.

So it was this sort of combination of both the university's outward facing commitment to human rights, its long established connection to the UN and its willingness to support faculty members who were engaged in public policy work.

GLOBAL ACTIVISM ON A LOCAL LEVEL

BTN LiveBIG: This is obviously one of the big world problems.
Dr. NiAoLain: Yeah.

BTN LiveBIG: Is there a way the average person can participate in activism around this issue?
Dr. NiAoLain: So I think we all start in the places where we live and it's that sense of civic activism to do with green spaces or it's to do with standing up for the rights of others in your community. Whether it's voting, whatever your issue is, that's where it starts.

I also say to my students, which is sort of the next level, is that idea of volunteering and engaging with the NGOs and the organizations that are working on issues. Right now, it goes to issues of immigration and toleration in our society and being engaged in those issues is the vaccination against the kinds of violence that we see in other places.

Then there's supporting the organizations: Supporting the ACLU, supporting organizations like Human Rights Watch and Amnesty International and the civil society organizations in your country that are protecting human rights and liberties and understanding that sometimes the people they fight for are the most marginalized and not always the most attractive. The reality is that when we fight for the rights of persons who have been charged with terrorist offenses, these are not always the most attractive but we are not measured by how well we treat the people who are easy to defend.

It's whether we can treat people we don't like well, which is the measure of our civilization.

BTN LiveBIG: How do you practice self-care in this kind of work?
Dr. NiAoLain: That's a really good question and I think it's really important. I've been an activist since I went to a university. I was in Belfast, Northern Ireland. I went to law school at the height of the conflict where people were being killed every day. My rides to work, when I went to the university, I would listen to the news in the morning and have to decide whether I was going to take route A or route B, depending on whether there was a bomb on a particular bridge or a particular road that was blocked off.

I have lived in some way with violence and in the context of violence my entire life. I know that actually all of us who are activists and who are participants, it is very easy to become overwhelmed by the kind of darkness around you.

I think we start from the premise that we're in it for the long haul. That means that we have to measure and be able to sustain what we do. That means that not everything is urgent. This is a very, very long fight. The fight for rights and equality, these are lifetime fights. So if you're in it, you're in it for the long haul. That's my philosophical bent, which means that from that, certain things follow.

I do yoga. I have three children. We take good holidays. I try, in particular, to switch off my phone in the evenings.

And I try sometimes, although it's quite difficult in this new position, not to follow the news. That used to be a little easier. Particularly when global terrorist events happen, invariably I have to know where they are and what's happening and sometimes make some interventions. But I do think that capacity of just really closing off and actually focusing on things that you love and being able to take a break is really important to your capacity to be effective when you come back to your work.

So I hope I've learned how to do that in the 30 years I've been doing this work. And I'm certainly trying to be more intentional about practicing it as I've taken on this new role, which obviously makes much more demands on me than possibly any of the roles I've held in my life to this point.

BTN LiveBIG: It's been wonderful to talk with someone of your background and experience about this.
Dr. NiAoLain: Well, thanks for your interest. I'm very hopeful. This is the one thing in closing I would say: when things look the worst is when the dawn breaks. I do genuinely believe that we are on the right side of history.