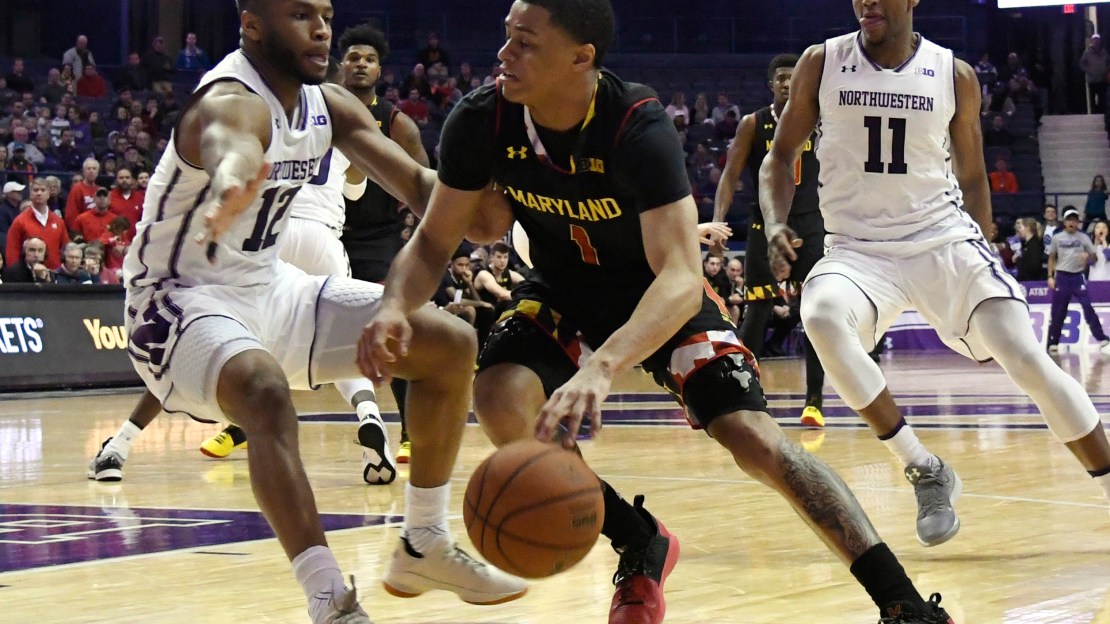 (AP) Maryland finally won on the road and gave itself a chance to finish with a .500 record in Big Ten play.

The Terrapins will take it.

"We've been through a lot of adversity this year, and for the most part, we thought that we've handled it pretty well," Huerter said. "It's just at the end of games when we're on the road, sometimes stuff kind of falls apart on us."

Not this time. Not with Huerter leading the way.

The Terrapins (19-11, 8-9 Big Ten) won on the road for the first time since Dec. 3 and handed Northwestern (15-14, 6-10) another difficult loss. After blowing a 27-point lead against No. 2 Michigan State in one of the biggest collapses in NCAA history on Saturday, the Wildcats couldn't protect an 11-point edge in the second half.

Huerter hit 3 of 6 3-pointers for Maryland while the rest of the team combined to shoot 2 of 11 from long range. Anthony Cowan Jr. and Dion Wiley each scored 13, and the Terrapins turned 14 turnovers by Northwestern into 20 points.

It added up to back-to-back wins for the first time since a seven-game run that ended in early January. Beat Michigan on Saturday, and Maryland will head into the Big Ten Tournament with a .500 mark in conference play.

"It's real good for us because we're going into the Big Ten Tournament," Wiley said. "I think we'll sneak a couple wins in, maybe even win the whole thing, honestly, the way we're playing. I think we're playing at a really high level."

Scottie Lindsey scored 15, but the Wildcats dropped their fourth in a row. They also blew a double-digit lead in their third straight game.

"Tonight, with an 11-point lead early in the second half, you've got to dig down and close it out," coach Chris Collins said. "That's been the story with our season, we haven't been able to win these kinds of games and it's been frustrating."

Collins noticed "mental fatigue" as the Wildcats let an 11-point lead early in the second slip away.

Maryland: The Terrapins won on the road for the first time since they beat Illinois in overtime on Dec. 3 and improved to 2-8 in away games.

Northwestern: The Wildcats followed up their epic collapse against Michigan State with another flat second half.

Northwestern was still up 54-49 midway through the half when the Terrapins went on a 16-2 run.

They took advantage of three turnovers while scoring nine straight, with Huerter's pull-up 3 off a steal by Wiley making it 58-54.

Pardon then dunked for Northwestern. But layups by Darryl Morsell and Bruno Fernando and a 3 by Wiley bumped Maryland's lead to 65-56 with just under four minutes left.

"I just told them, `Guys, we're going to come up short again if we don't start guarding. We have no chance.' They had 37 at halftime and I said if they score 37 in the second half, we're done. It won't be close. So we guarded a lot better in the last 15 minutes. Guys played with energy and guarded smart." – Maryland coach Mark Turgeon on his message to the team trailing 37-30 at halftime.

Maryland: The Terrapins close out the regular season at home against No. 17 Michigan on Saturday.

Northwestern: The Wildcats host Wisconsin on Thursday in their final scheduled home game at Allstate Arena.