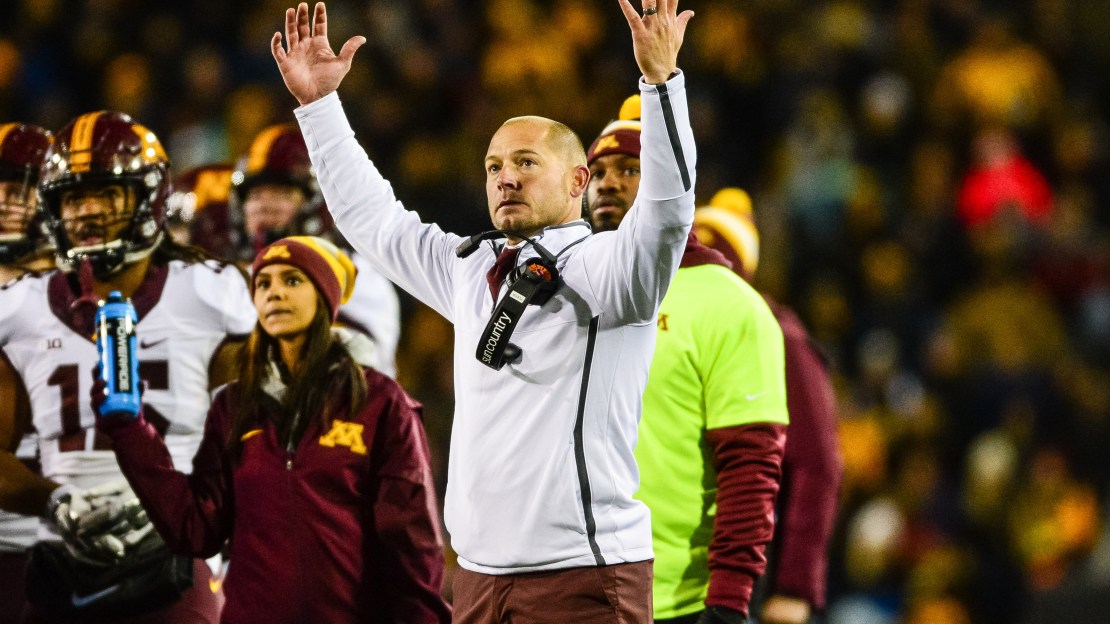 Fleck has altered his staff. He promoted Joe Rossi from quality control assistant to defensive line coach and also hired Clay Patterson, who will serve in a to-be-determined on-field coaching role. Fleck also announced Bryce Paup, who coached the defensive line in 2017, is now the team's pass-rush specialist coach and that special teams coordinator Rob Wenger also will coach outside linebackers. In addition, Fleck promoted David Parker from graduate assistant to quality control assistant to fill the void created by the Rossi promotion.

Quarterback. This has been a problem spot for years. And P.J. Fleck knows he has to get it fixed. Demry Croft has opted to transfer. No big loss. JC transfer Vic Viramontes may be the elixir. The dual-threat has three years of eligibility and already is on campus. Viramontes is an intriguing prospect who was at Cal for a year before transferring to a JC. He may end up being the guy taking snaps in Dinkytown. Redshirt freshman Tanner Morgan and sophomore Seth Green also are in the mix.

Receiver. This spot has been problematic for a number of years. The good news: junior Tyler Johnson looks like a star. He led Minnesota with 35 receptions for 677 yards and seven touchdowns last season. Sophomore Phillip Howard is on the rise. And keep an eye on redshirt freshman Chris Autman-Bell, who is coming off a broken hand. Sophomore Demetrius Douglas could emerge. He should get an NCAA medical hardship after injury cost him the last nine games of last year. Maybe true freshmen Rashod Bateman and Jornell Manns could emerge. Lots of potential.

Secondary. This has been a strong area in recent years, but things need to come together. Senior Antonio Shenault is one corner. Sophomore Kiondre Thomas could be the other starter. That's a decent-looking tandem. At safety, look for junior Antonie Winfield Jr., and senior Jacob Huff to likely be the starters. Winfield is legit. This unit could end up being a strength. Junior Coney Durr, sophomore Calvin Swenson, junior Chris Williamson and redshirt freshman Rey Estes are in the mix, too.