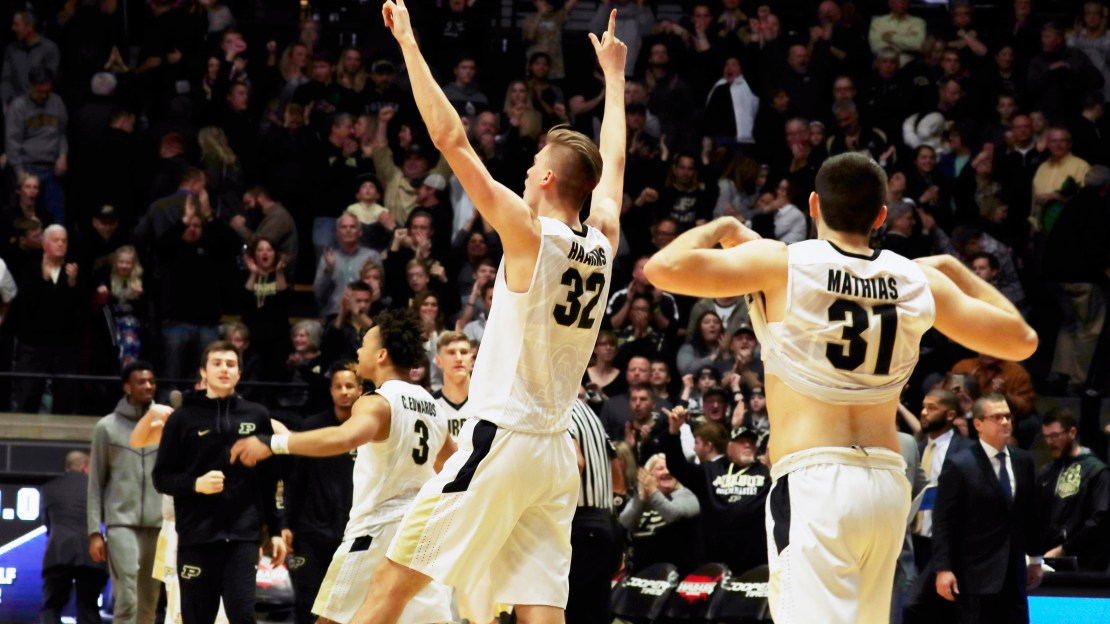 (AP) After a rough 10-day stretch, sixth-ranked Purdue rediscovered the joy of a well-played game.

Carsen Edwards and Dakota Mathias led the way in a second-half spurt, and Purdue held on to edge Penn State 76-73 on Sunday night.

Edwards scored 27 points, Mathias added 18 points and Isaac Haas had 12 points and six rebounds as the Boilermakers (24-5, 13-3 Big Ten) snapped a season-worst three-game skid, which included losses to ranked Ohio State and Michigan State before falling to Wisconsin. The three defeats were by a combined eight points.

"Basketball was pretty fun today," Mathias said. "That was something we were searching for the last couple games, couple weeks. I think you could tell at Wisconsin that we weren't enjoying ourselves, weren't playing with energy, and that's not who Purdue is. Today, I think, for 40 minutes, everybody stepped up. That's how we have to play all the time."

Ryan Cline's 3-pointer with 5:31 remaining gave Purdue a 61-58 lead, and the Boilermakers never trailed the rest of the way.

It wasn't easy for a Purdue team in search of the same offensive flair that made the Boilermakers unbeatable during a program-record 19-game winning streak that stretched from November until a 64-63 loss to Ohio State on Feb. 7. It became more difficult without starting forward Vincent Edwards, one of the team's most consistent players.

Vincent Edwards sat on the bench wearing a walking boot after spraining his left ankle in practice on Saturday. The team disclosed the injury in a statement before tipoff.

The Boilermakers trailed by as much as nine points in the first half, during which they shot 42.3 percent from the field and went 2 for 9 from 3-point range.

Tony Carr had 19 points, five rebounds and five assists, Shep Garner had 17 points and Lamar Stevens had 13 points and six rebounds for the Nittany Lions (19-10, 9-7). The loss ended a stretch of six wins in seven games.

Carr scored at the end of an 11-1 run to give Penn State a 29-20 lead with 5:03 left in the first half. The Nittany Lions led 36-32 at halftime before Carsen Edwards and Mathias led the Boilermakers on a 14-4 run in the second half.

Carsen Edwards converted a three-point play and later made a 3-pointer during the burst. Mathias drove to the basket twice, including one layup to make it 53-42 to with 12:30 to go.

"I think it was just a great win in terms of from an energy standpoint," Purdue coach Matt Painter said. "I thought we were very sluggish in our last game. I thought we showed much more poise and did a much better job executing. We were very fortunate to win this game."

With Vincent Edwards out, Purdue used a different starting lineup for the first time after going with the same five through the first 28 games. Junior Grady Eifert started for Edwards, who is questionable for the remaining regular-season games.

Penn State: Despite another poor offensive night by Purdue, the Nittany Lions proved their recent hot streak, which included a 79-56 blowout of No. 8 Ohio State, may not have been a fluke. Even after the Boilermakers found a groove in the second half, Penn State still never trailed by more than 11 points.

Purdue: After dropping three straight conference games and falling in the Big Ten standings, the Boilermakers needed to get back on track quickly with just two regular season games remaining.

Purdue: The Boilermakers are at Illinois on Thursday.