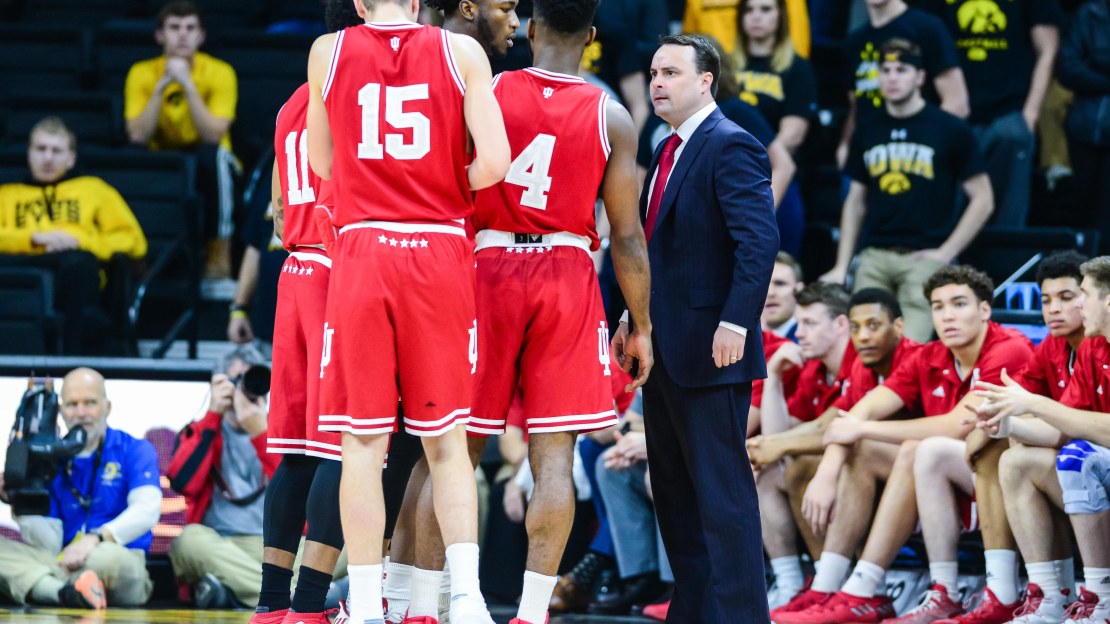 (AP) Indiana survived one of its strangest games of the season and kept its winning streak alive with the Big Ten tournament less than two weeks away.

Still, the Hoosiers needed a record-setting performance from Robert Johnson to hold off the reeling Hawkeyes.

Johnson scored a career-high 29 points on nine 3s, which tied the school record, and Indiana rallied from an early 13-point deficit and beat Iowa 84-82 for its fourth straight victory.

Devonte Green had 18 points on four 3s for the Hoosiers (16-12, 9-7 Big Ten), who also blew a 13-point lead before Freddie McSwain Jr. hit the game-winning basket on a layup with 46 seconds left.

"We're lucky to come out of here with a (win). A lot of guys stepped up," Indiana coach Archie Miller said. "Can't say enough about our backcourt. (Johnson) and (Green) were really, really good."

Tyler Cook was really good for Iowa (12-17, 3-13), scoring 28 points and 10 rebounds. But he missed a put-back at the buzzer that would've forced overtime. The Hawkeyes have lost five straight.

Juwan Morgan opened the second half with a 3 to tie the game at 45 – a shot that served as a precursor for things to come. Indiana buried seven of their first nine tries from 3-point range after halftime, including three straight from Johnson, to go up 72-59 with just over 10 minutes left.

"If there was any disappointment, it was the run that (Indiana) made in the second half, more so anything that happened in the first half. I thought that when we got a lead, we got content to trade. We didn't extend it, and of course they're going to keep shooting the ball," Iowa coach Fran McCaffery said.

Indiana finished 56 percent from the field overall, had 23 assists on 32 baskets and finished 14 of 24 from beyond the arc.

Indiana: The Hoosiers kept their very slim hopes of reaching the NCAA Tournament alive by avoiding what would've been a terrible late February loss. If they can beat Nebraska and Ohio State to close out the regular season – an unlikely but not impossible scenario – the Hoosiers will head to New York with a shot.

Iowa: The Hawkeyes can score with anyone. It's their defense that'll need to be fixed in the offseason. The Hoosiers were wide open on many of those tries beyond the arc, allowing multiple players beyond Johnson to get into a groove from the perimeter, but McCaffery was especially frustrated about his team's defense on Johnson and Green. Still, Iowa deserves credit for making a game of it until the final buzzer sounded.

Johnson was 9 of 12 on 3s, and Indiana was 8 of 12 on 3s overall in the second half. … Iowa star Jordan Bohannon was just 3-of-12 shooting and 2 of 10 on 3s. He had 10 points. Indiana had just 10 turnovers. …The Hawkeyes outrebounded Indiana 33-19 and went 19 of 22 from the free-throw line. … Cook also had five turnovers. … Even though each team led by 13, the lead changed hands just three times. … Iowa starter Isaiah Moss played just 18 minutes, scoring five points. … Justin Smith had 15 points for Indiana.

Indiana: Plays at Nebraska on Tuesday.

Iowa: Plays at Minnesota on Wednesday.