No. 2 Michigan State rallies from 27 down to top Northwestern 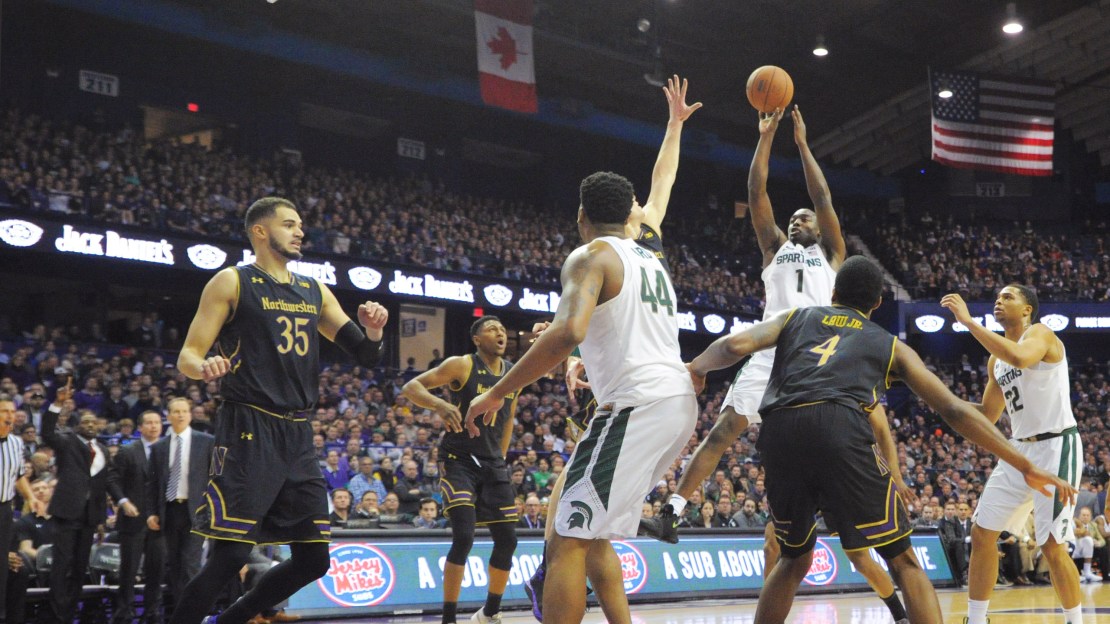 (AP) Cassius Winston scored 17 points, and No. 2 Michigan State erased a 27-point deficit on Saturday to beat Northwestern 65-60 and extend its winning streak to 10 games.

Nick Ward added 15 points and 10 rebounds. Miles Bridges hit four free throws in the final minute, and the Spartans (26-3, 14-2 Big Ten) used a huge second half to pull out the win when they looked like they were headed to a stunning blowout loss.

The Wildcats gave themselves a great chance at their first win over a Top 5 team since 1979 even though star guard Bryant McIntosh sat out with a shoulder injury.

They led by as much as 27 and were up 49-27 after a stunning first half that had fans chanting "Overrated!" But the Spartans – tied for the Big Ten lead coming into the game – sure did turn it around after halftime.

They outscored Northwestern 29-4 over the first 14 1/2 minutes, tying it on Nick Ward's tip-in and taking their first lead of the game at 56-53 on Jaren Jackson's three-point play with 5:26 remaining.

With the Spartans clinging to a two-point lead in the final minute, Bridges hit two free throws and Winston added two more to make it 63-57. Law nailed a 3 for Northwestern to make it a three-point game with 11.4 seconds remaining, but Bridges hit two more foul shots.

Michigan State: With their two remaining games against bottom-five Big Ten teams – last-place Illinois and Wisconsin – the Spartans are in good position to finish first in the conference. They also appear poised to make a long NCAA Tournament run, with an eighth Final Four appearance and second national championship under Izzo a possibility, even though they're playing against a backdrop of the scandal involving former campus sports doctor Larry Nassar, who was convicted of child pornography and sexual assault after abusing athletes in his care.

Northwestern: This might be the most disappointing loss in a letdown of a season for the Wildcats after their first NCAA Tournament appearance.

Michigan State: The Spartans host Illinois in their final home game on Tuesday.

Northwestern: The Wildcats play Maryland on Monday in the second of three consecutive home games.