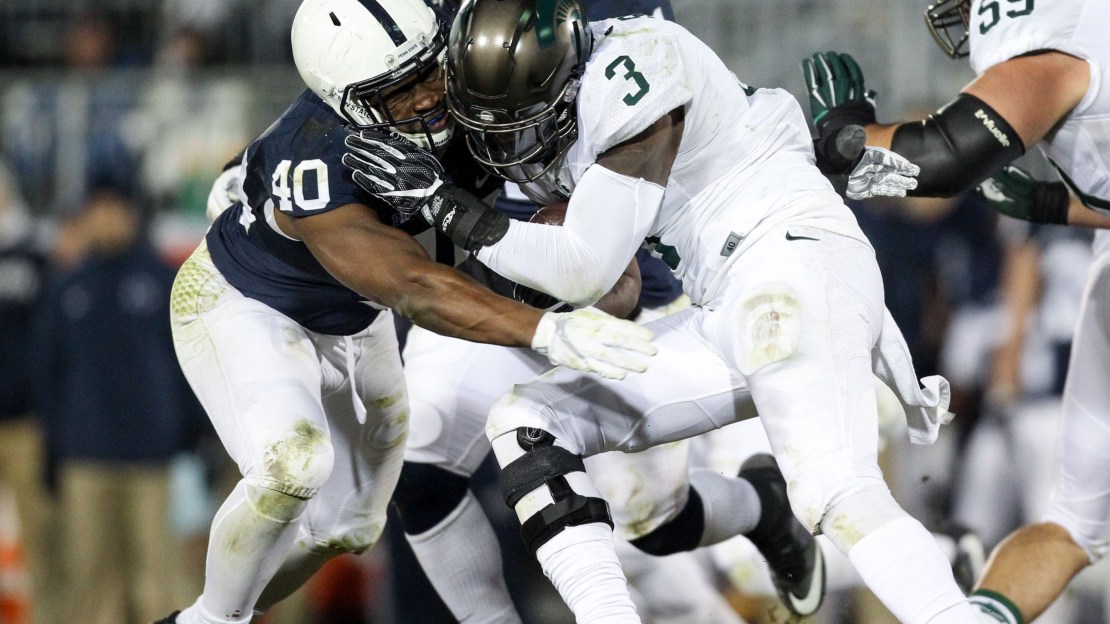 What can Mark Dantonio do for an encore after taking Michigan State from a 3-9 mark in 2016 to a 10-3 finish in 2017? It was the biggest single-season improvement in school annals.

Making that reversal of fortunes all the more remarkable: The Spartans had a relatively young squad, as 67 percent of the roster was made up of freshmen and sophomores. Just three senior starters are gone, as 19 starters along with two specialists are back. Michigan State loses just four starters combined on offense, defense and special teams. That bodes well for the future.

The defense was the biggest surprise in 2017, ranking No. 4 overall in the Big Ten (297.8 ypg) and No. 2 vs. the run (101.3 ypg). And MSU also was sparked by the emergence of quarterback Brian Lewerke, who became a deadly dual-threat. This surprisingly successful season by a young Spartans squad means MSU has a great chance to be in the thick of the East Division race again in 2018.

The staff underwent some changes, however. Defensive coordinator Harlon Barnett left for the same position at Florida State. That's a big loss. Linebackers coach Mike Tressel is now the defensive coordinator after serving as co-coordinator the last three seasons. Former Kent State coach Paul Haynes was hired to coach defensive backs, the position Barnett was responsible for. MSU also tabbed Chuck Bullough to coach to work with defensive ends after Mark Snyder left for Florida State with Barnett. Bullough is a former Spartan linebacking great who was coaching the d-line at Eastern Michigan. With the newly allowed 10th assistant position, former MSU offensive coordinator Don Treadwell returns to coach the Spartans' special teams, assist with defensive backs and serve as the new "freshman head coach" to oversee first-year players on and off the field.

Here are three position groups to watch this spring.

Offensive line. The only starter gone is stalwart center Brian Allen, a co-captain. Sophomore Matt Allen, Brian's brother, could be the new center. Junior Tyler Higby-who also can play guard–also is a possibility. The other spots look set with junior Cole Chewins at left tackle, senior David Beedle at left guard, sophomore Kevin Jarvis at right guard and sophomore Luke Campbell at right tackle. Jarvis made 10 starts in 2017, the most ever for a true freshman offensive lineman in Mark Dantonio's 11 seasons with the program. This veteran unit needs to be fine-tuned and become better at getting a more consistent and steady push in the ground game. MSU was just No. 7 in the Big Ten in rushing last season (167.8 ypg).

Running back. Senior LJ Scott is back after rumbling for 898 yards, but he averaged a career-low 4.5 yards per tote. Big things will be expected from him this fall, especially working behind a veteran offensive line. Scott has led the team in rushing each of the last three seasons. Keep an eye on sophomore Connor Heyward. Mark Dantonio likes to use multiple backs.

Backup quarterback. The Spartans are set with the starter, as junior Brian Lewerke is back after a breakout 2017 season. He is a rising star. But who will back him up? Damion Terry graduated and Messiah deWeaver left for a junior college. Look for redshirt freshman Rocky Lombardi to get plenty of reps this spring. Theo Day is a touted true freshman who already is enrolled, but Mark Dantonio has played only one true freshman signal-caller in his tenure (Nick Foles for one game in 2007). The top five pass-catchers from 2017 are back, so that will help Lewerke and Co.