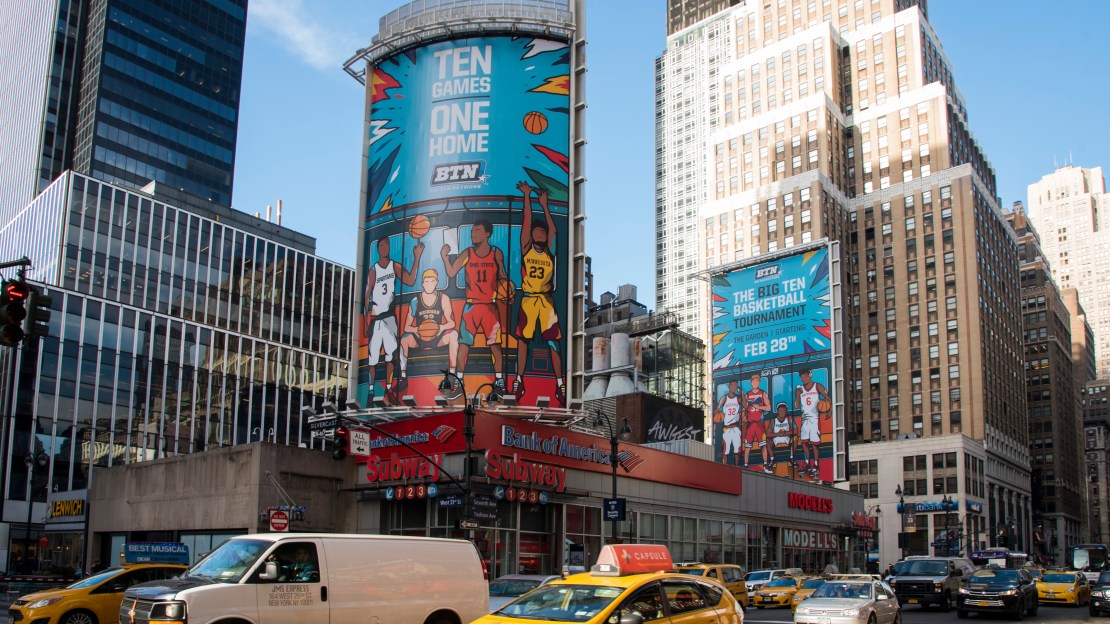 With the use of iconic advertising, custom art installations and a world-renowned design team, BTN today announced plans to keep up in the city that never sleeps. The campaign, centered on the Big Ten Men?s Basketball Tournament Presented by SoFi, began on Monday and will run through the conclusion of the tournament on Sunday, March 4.

With the guidance of creative and media agency of record Fallon, and the creative work of Van Orton Design, fans around Madison Square Garden and commuters heading to and from Penn Station will be surrounded by reminders of the tournament?s debut in New York City. A pair of super towers, located at West 33rd Street and 7th Avenue, will showcase Van Orton?s design that combines a distinctive Big Ten look and vibrant color scheme. Additional creative will also be posted on the Penn Plaza Digital Gateway, located at West 34th Street and 7th Avenue, on the walls of The Pennsy on West 33rd Street and 7th Avenue and in various other locations throughout the city.

Several blocks north in Midtown, an ?All Signs Point to BTN? art installation created by Fallon will reside in the plaza at West 48th Street and 6th Avenue (1211 Avenue of the Americas). Standing 20-feet high and displaying the distance to all 14 Big Ten Schools participating in the tournament on BTN, the structure will be placed on Sunday, Feb. 25 and remain in place until Friday, March 2.

Throughout the week a branded double-decker bus, also featuring designs by Van Orton, will traverse New York City with official Big Ten Mascots as well as life-sized bobbleheads representing each university. Among the several stops and appearances will be a visit to ring the famed Nasdaq Stock Market Closing Bell on Tuesday and a ribbon cutting ceremony for a refurbished basketball court in Queens on Wednesday.

For fans looking to get an early start on the festivities, custom school-specific BTN Snapchat filters will be available in and around Big Ten alumni bars in New York City beginning on Monday Feb. 12, and surrounding Madison Square Garden beginning on Wednesday, Feb. 28.