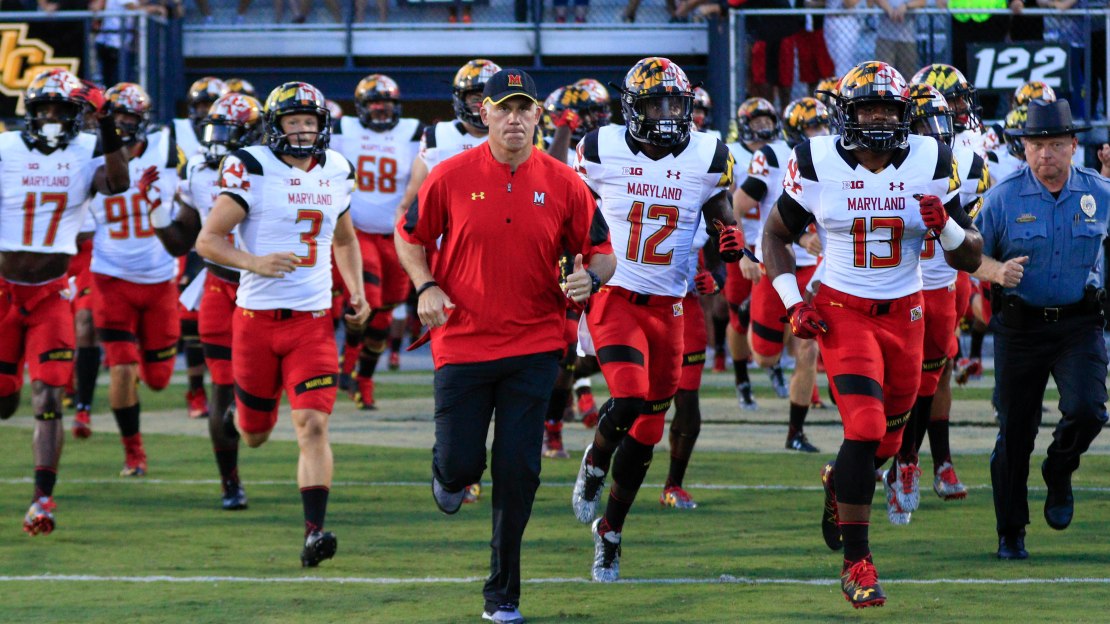 DJ Durkin is looking for a breakthrough as he begins his third season at Maryland. The program took a step back in his second year, going 4-8 overall and 2-7 in the Big Ten. But Durkin still continues to recruit well, offering hope for big things in the future.

Durkin?s staff underwent some big changes. Pete Lembo is out as offensive coordinator and Matt Canada is in. He brings a lot of experience to College Park, most recently serving as OC at LSU. Canada also has operated offenses at Indiana, Northern Illinois, Wisconsin, N.C. State and Pitt. Dave Bucar was brought in to coach tight ends; he was with LSU last season.

Former Terp Jafar Williams is the new running backs coach, arriving from Rutgers. Bryan Stinespring is the new offensive line coach, coming over from FCS James Madison after working for years at Virginia Tech. On defense, Durkin brought in Chuck Heater to coach safeties. He is a sage coach who was DC at Marshall.

The offense was hampered by injuries at quarterback in 2017. How bad was it? Maryland had to use five different quarterbacks. As a result, the Terps watched a 3-1 start melt into a 1-7 finish.

First, Tyrrell Pigrome was lost for the year with a knee injury in a season-opening win at Texas. Then, promising true freshman Kasim Hill went down with a season-ending knee injury in a 38-10 loss vs. Central Florida in the third game of the season. Then, in the fifth game of the year, Maryland had to use fourth-stringer Caleb Henderson when third-stringer Max Bortenschlager got dinged in a 62-14 evisceration at Ohio State. Even walk-on Ryan Brand saw some action later in the year.

On top of the offensive woes, the defense struggled-badly. Maryland finished last in scoring defense (37.1 ppg) and 13th in total defense (419.4 ypg), as the Terps allowed a league-high 23 passing TDs.

Here are three positions to watch this spring:

Receiver. Who steps up alongside Taivon Jacobs to replace DJ Moore, the Big Ten Receiver of the Year last season who turned pro? Maryland needs some playmakers on the edge who can stretch the field. No doubt, the revamped unit of wideouts will benefit from consistent play from the quarterback spot. No way that position can be as snake-bit as it was last season. Utah State grad transfer Rayshad Lewis could help. He is the son of Ravens? legend Ray Lewis. Senior Jahrvis Davenport and junior DJ Turner look to take the next step. Those two along with Jacobs are the top three targets. Sophomores Tahj Carpenter and Sean Nelson are promising.

Linebacker. With Jermaine Carter and Shane Cockerille gone, can Illinois grad transfer Tre Watson make an immediate impact? He was one of the few bright spots on a horrid Illini defense last season, finishing third on the team in tackles. And does sophomore Bryce Brand take the next step in Year Two? He could be a special player. Junior Brett Shepherd is a guy to watch along with junior Isaiah Davis.

Defensive line. Rushing the passer was an issue last year. Having senior end Jesse Aniebonam return from a season-ending broken ankle suffered in the opener is a boon. He will line up opposite heralded junior Byron Cowart, who signed with Auburn out of high school but left the program last September and landed at a JC. He was the No. 1 recruit in the nation coming out of high school in 2015, according to ESPN.com. Aniebonam and Cowart could be formidable off the edge. Inside, senior Mbi Tanyi and junior Adam McLean look to be difference makers at the tackle slots. Behind them, keep an eye on Cam Spence and Breyon Gaddy, four-star talents that redshirted last season as freshmen.