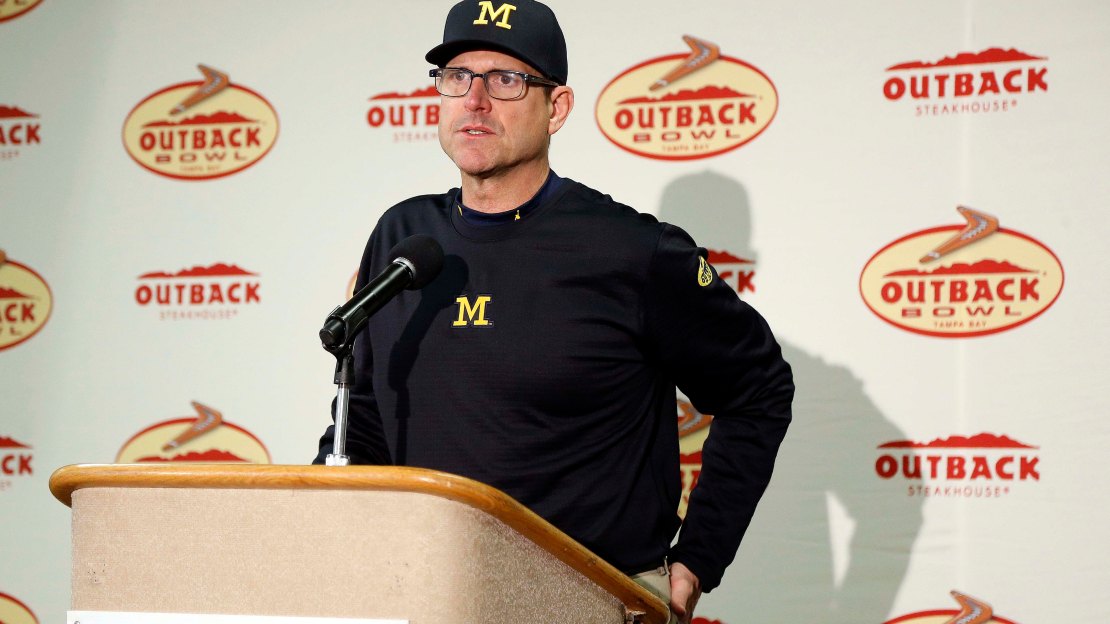 Jim Harbaugh has work to do this spring. And the heavy-lifting is on offense, as he looks to push Michigan up the pecking order in the rugged Big Ten East coming off his worst season in Ann Arbor.

Job No. 1 for Harbaugh: Get the offense on track. Michigan was No. 8 in scoring (25.2 ppg) and No. 9 in total offense (348.9 ypg) last season. The quarterback play left a lot to be desired. Brandon Peters is back after starting in the bowl game as a redshirt freshman, but he struggled in a loss to South Carolina. Ole Miss transfer Shea Patterson has Wolverines fans drooling and could be just what this offense needs, but he is awaiting word from the NCAA on if he?ll be eligible in 2018 or have to sit out as a transfer. Patterson has two seasons of eligibility.

While the offense is peppered with questions, the defense just needs to be fine-tuned this spring with just two starters gone in linebacker Mike McCray and tackle Maurice Hurst. Last season, the Wolverines ranked third in the Big Ten in scoring defense (18.8 ppg) and second in total defense (271.0 ypg). The pass defense was No. 1 in the nation (150.1 ypg). And this was a young unit in 2017, so coordinator Don Brown should have another standout defense.

After closing 2018 with three losses in a row, Harbaugh reshaped his staff. Sherrone Moore was hired from Central Michigan to coach tight ends. Al Washington was hired from Cincinnati to work on defense and Ben Herbert was brought in as strength and conditioning coach. Veteran Ed Warinner was hired as a senior offensive analyst. And there is talk that former Florida head coach Jim McElwain may join the staff. All of this after secondary coach Brian Smith (Rice) and offensive tackle/tight ends coach Greg Frey (Florida State) bolted. Dan Enos was hired from Arkansas as receivers coach but stayed just a few weeks before leaving for Alabama.

Offensive line. This group has been good ? but not dominating, especially vs. quality opponents. Three starters are back in junior guards Michael Onwenu and Ben Bredeson along with senior right tackle Juwann Bushell-Beatty. There is a yawning need for a left tackle. Staffers have their fingers crossed that sophomore Grant Newsome is healthy as he battles back from a right leg injury suffered in October 2016. If he can?t go, redshirt freshman Chuck Filiaga is an option. And Michigan is trying to lure Rice grad transfer Calvin Anderson for the void. Sophomore Cesar Ruiz looks like the new center.

Quarterback. This spot has been inefficient for too long. Perhaps Shea Patterson will be the elixir. The Ole miss transfer is a five-star talent who could give this offense a big lift. But he has to be declared eligible by the NCAA. Stay tuned. If Patterson gets the green light from the NCAA, he?ll likely start. Sophomore Brandon Peters returns from what best can be called an ?uneven? debut. And don?t forget about redshirt freshman Dylan McCaffrey. Four-star gem Joe Milton already is on campus.

Receiver. Youth was served at this spot last season. And, it often showed. After a trial by fire, sophomores Donovan Peoples-Jones and Tarik Black could be poised for big things. Black missed most of last season with a broken left foot. Senior Grant Perry is a steady hand. Juniors Eddie McDoom and Kekoa Crawford need to step up as Maurice Ways and Drake Harris both left as grad transfers.