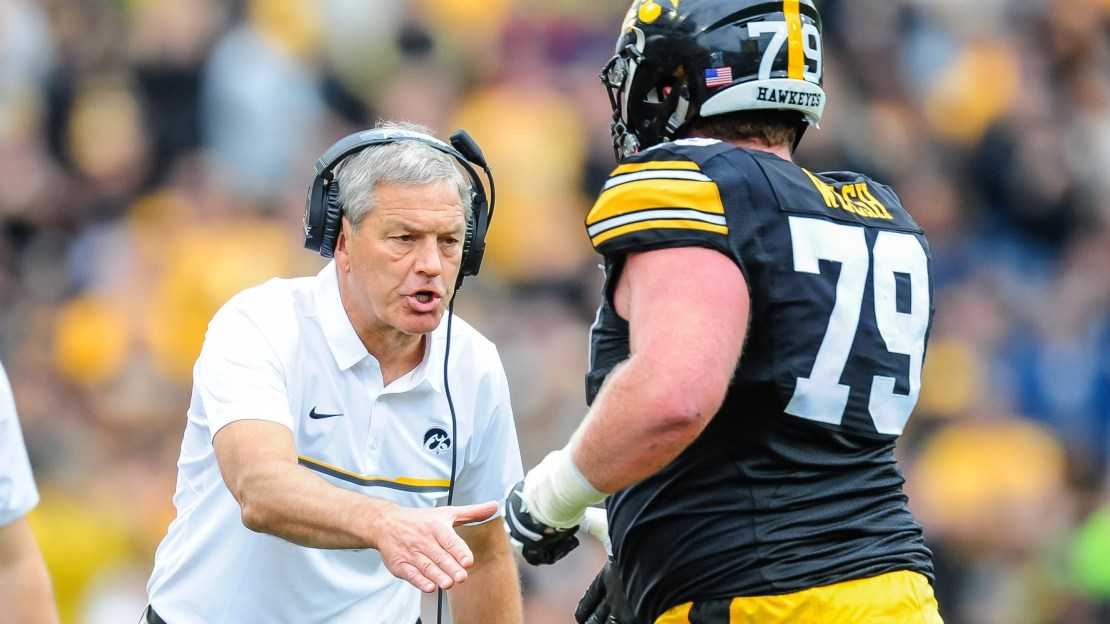 The 2018 season will be the 20th in Iowa City for Kirk Ferentz, matching the number of seasons predecessor Hayden Fry coached for the Hawkeyes. The 2017 season was another strong campaign for Ferentz, who capped an 8-5 season with consecutive wins including a victory vs. Boston College in the Pinstripe Bowl. It was the program's fifth bowl in a row and first postseason triumph since 2010.

To make strides in 2018, the Iowa offense needs to improve after it struggled for consistency last season. The Hawkeyes were No. 10 in the Big Ten in total offense (329.5 ypg), finishing 11th in rushing (139.2 ypg). Injuries at offensive tackle really hurt what typically is a stout Hawkeye rushing attack. How bad was it? Only three teams averaged fewer yards per carry than Iowa's 3.8. The passing game had a bit more bite, ranking No. 9 (190.2 ypg). QB Nate Stanley showed promise in his first year as a starter, hitting 55.8 percent of his passes for 2,437 yards with 26 TDs and just six picks. No doubt, Iowa was helped by a turnover margin of plus-seven that ranked No. 2 in the Big Ten.

The defense was steadier, ranking fifth in the conference in scoring (19.9 ppg) and No. 3 in pass-efficiency defense. Iowa's 21 interceptions led the conference behind coordinator Phil Parker. The bad news: The Hawkeyes must rebuild their linebacking unit and replace a superstar in the secondary.

Linebacker. No position was ravaged more with all-time great Josey Jewell gone along with Bo Bower and Ben Niemann. Sophomore Nick Niemann, Ben's younger brother, could draw a bead on a starting spot on the outside. Keep an eye on senior Aaron Mends on the weak side. Inside, junior Kristian Welch may be the guy. Junior Amani Jones and sophomore Barrington Wade are competing for playing time on the outside. Senior Jack Hockaday is a factor in the middle. Four signees could figure in the mix. Stay tuned. This area may be a work in progress all the way up to the opening kickoff.

Offensive line. This area needs to develop. The staff likes sophomore tackles Alaric Jackson and Tristan Wirfs, who were forced into action last season. Wirfs could be special. Senior Keegan Render looks like an anchor on the interior at center, which is a key spot with James Daniels gone. Sophomore Cole Banwart is another to watch at center. Senior Ross Reynolds could be the other guard. Junior Levi Paulsen is a guy to watch at guard and tackle. Keep an eye on redshirt freshman Mark Kallenberger.

Receiver. It's an annual refrain in Iowa City: Who will be a field-stretching playmaker? Sophomore Ihmir Smith-Marsette is back along with sophomore Brandon Smith and senior Nick Easley. That's a solid trio to build around. But more is needed. Keep an eye on junior Devonte Young and sophomore Max Cooper. Redshirt freshman Henry Marchese teems with potential. Perhaps true freshmen Tyrone Tracy and Nico Ragaini can make an instant impact.