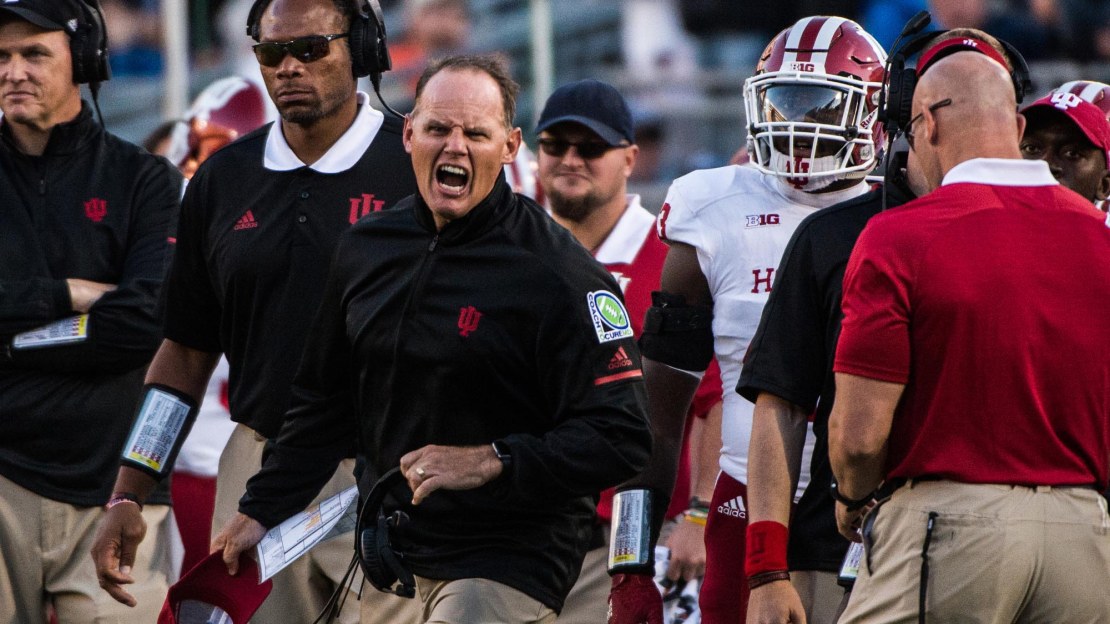 The debut of Tom Allen at Indiana offered promise. The Hoosiers entered the finale with a chance to go bowling with a win, but IU lost at Purdue to finish 5-7 (2-7 Big Ten) and end a modest two-year bowl run. Still, Allen has this program pointed in the right direction. He's a bright mind and master motivator.

Allen?s specialty is defense. And that group played pretty well most of 2017. But that unit needs to replace four of its top five tacklers. The offense? It was a bit too inconsistent last season, especially a rushing attack that finished 12th in the Big Ten (130.1 ypg). IU?s 11 rushing TDs were the fewest in the Big Ten. And it was a setback when developing redshirt freshman quarterback Peyton Ramsey was lost for the season to injury in late October after a loss at Maryland; he had taken over the job from Richard Lagow with Indiana off to a 2-2 start. The offense has many key parts back, so the potential is promising. One issue that must be addressed: Turnovers, as the Hoosiers finished tied for last in the conference in turnover margin at minus-seven.

Linebacker. Some big holes to fill with Tegray Scales and Chris Covington gone. Scales was No. 2 on the team in tackles with 89 in 2017; Covington was No. 3 with 85. The staff will look to players like sophomore Reakwon Jones. And the return of Marcelino Ball, who plays the hybrid ?husky? spot, from a knee injury suffered in the third game of last season will be welcomed. The junior is a playmaker. Others to watch are junior Kiante Walton, junior Mike McGinnis and redshirt freshmen Mo Burnam and Thomas Allen, the head coach?s son.

Receiver. Simmie Cobbs left early. He will be missed after pacing the club with 72 catches for 841 yards and eight TDs, but this unit has lots of potential. The good news: seniors Nick Westbrook (one game played) and Donavan Hale (three games played) are returning from injury. Senior Luke Timian is a steady hand who was second on the team last season with 68 catches for 589 yards and two TDs. Whop Philyor flashed potential last season as a true freshman, finishing third on the squad with 33 grabs for 335 yards and three scores. Sophomore Ty Fryfogle is another guy to watch.

Secondary. IU needs to replace some good players in CB Rashad Fant, S Chase Dutra and S Tony Fields. Dutra led the team with 96 tackles last year. Senior Jonathan Crawford will be a bellwether at one safety spot. Others to keep an eye on at safety are redshirt freshman Juwan Burgess and junior Kahlil Bryant. Junior Andre Brown is a guy to watch at one cornerback slot. Junior A?Shon Riggins is a veteran corner. Keep an eye on sophomore Raheem Layne, IU?s Defensive Newcomer of the Year in 2017. Fellow sophomore LaDamion Hunt has potential.