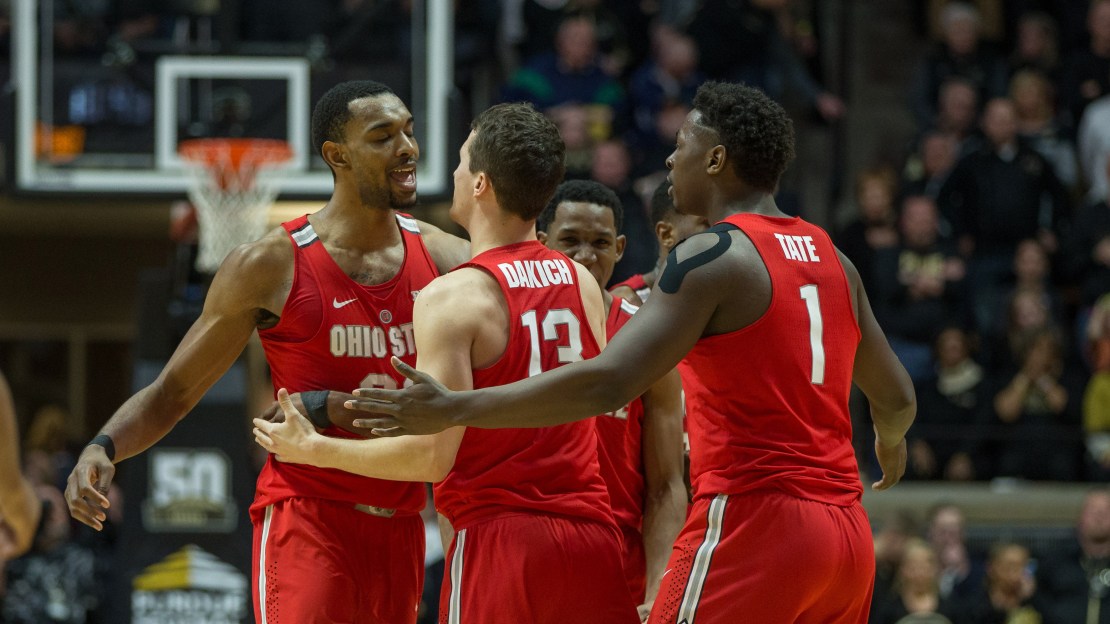 As the Big Ten Tournament approaches, the conversation about postseason possibilities is top of mind for basketball fans. As much as that topic can dominate our minds, there's still time left in the season for anything to happen.

For many, finishing high in the Big Ten standings is the biggest key, as standings will determine seeding for the conference tournament in New York City. The coveted double-bye is huge for a team that needs some time to recover or regroup, but there are still teams with work left to do and every opportunity to pick up a win is important.

Here's how my latest Big Ten Power Rankings, presented by ArcelorMittal, stack up.

1. Ohio State (22-5, 13-1). The Buckeyes may not be the most talented or deep team in the conference, but they know who they are, they play within themselves, and they win.
Last week: 3

2. Michigan State (24-3, 12-2). The Spartans have the highest ceiling of all the Big Ten teams, and seem to be taking steps every day toward reaching their potential.
Last week: 2

3. Purdue (23-4, 12-2). While the Boilermakers are the most complete and experienced team in the conference, they'll have to overcome the fear of expectation if they want to close out tough games, both at home and on the road.
Last week: 1

4. Nebraska (19-8, 10-4). The starting five for the Huskers can play with anyone in the country, and will have to lead the way if they want to maintain momentum the rest of the way.
Last week: 5

5. Michigan (20-7, 9-5). While there are vulnerabilities, at times, with the Wolverines, there's also something dangerous about them that leads me to believe that they can go on yet another run in the Big Ten tourney.
Last week: 4

6. Penn State (18-9, 8-6). Whether they realize it or not, the Nittany Lions are the most dangerous team in the conference right now, and it wouldn't surprise me if they win two or three of the next four games against the Big Ten's best teams.
Last week: 6

7. Indiana (14-12, 7-7). There's a consistency in effort that is finally there with the Hoosiers, and the small lineup with Juwan Morgan at the 5 spot forces opponents to adapt to them.
Last week: 8

8. Northwestern (15-11, 6-7). As disappointing as this season has been for many in and around the Northwestern program, the potential to be disruptive and competitive is certainly still there for this veteran bunch.
Last week: 7

9. Maryland (17-10, 6-8). The Terps have had to adapt their game quite a bit since the start of the season, but the potential for them to get hot and beat quality opponents remains.
Last week: 9

10. Wisconsin (11-6, 4-10). As challenging as this season has been for guys like Greg Gard and Ethan Happ, there has not been any let-up or lack of effort from anyone, and that competitiveness will be one of the building blocks going forward.
Last week: 13

11. Iowa (12-15, 3-11). The Hawkeyes may be the biggest surprise of the year for me, but I also feel that they have the personnel, depth and potential to make the biggest jump next season.
Last week: 12

12. Minnesota (14-13, 3-11). Clearly this season has been a huge disappointment in many ways for the Gophers, but the recent play of Nate Mason and Isaiah Washington could make them a tough bunch to face in the conference tournament.
Last week: 11

13. Illinois (12-14, 2-11). While inconsistency may be what most Illini fans will remember about this season, I view 2017-18 as the establishment of the foundation for a program that will bring an intensity and tempo to the conference unlike any team before.
Last week: 10

14. Rutgers (12-15, 2-12). The loss of Mike Williams earlier this season proved to be too much to overcome for a young and developing Rutgers program that has the pieces in place to be a consistent competitor for years to come under Steve Pikiell.
Last week: 14