Best of the week that was: Miles Bridges, Ohio State highlight action 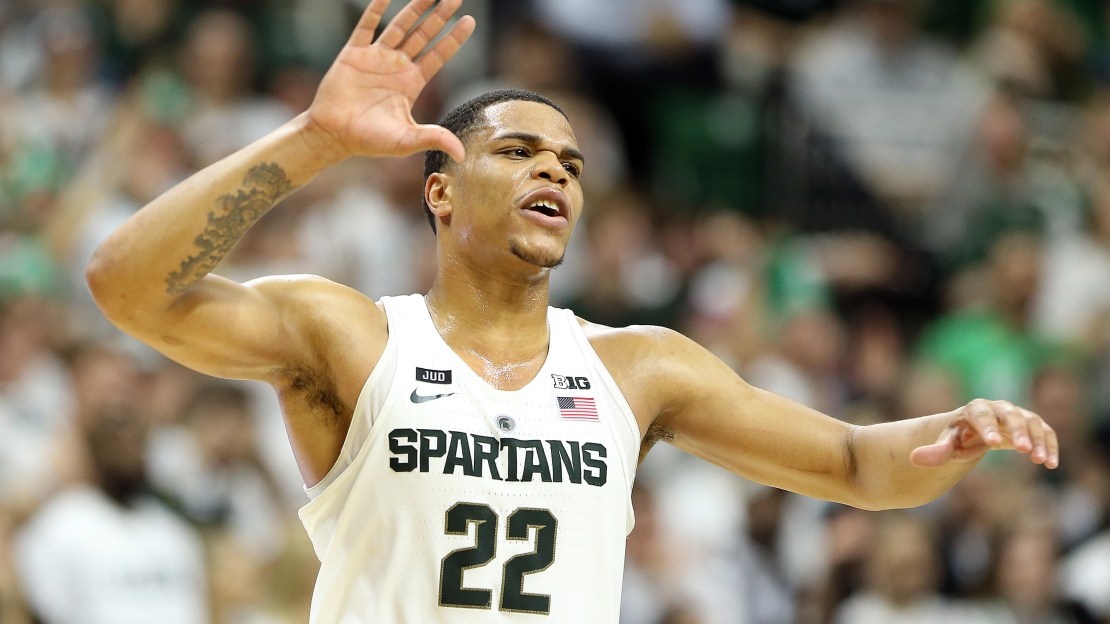 Did you feel that? That was the sound of the Big Ten standings taking a jolt this week, with Purdue losing its throne and Ohio State ascending to the summit. Who saw the Buckeyes on top with two weeks left in the season back in November?

Here is a look back on a wild week in the Big Ten.

Biggest surprise: Ohio State. The Buckeyes continue to amaze, sitting atop the Big Ten standings with 13-1 mark, one game ahead of Purdue and Michigan State. OSU pulled out a huge 64-63 win at Purdue on Wednesday in what arguably was the "game of the year." Then, the Buckeyes blasted moribund Iowa on Saturday. Couple that 2-0 week with Purdue's 0-2 week, and Ohio State finds itself on top of the league standings. And the Buckeyes are doing this with a first-year coach in Chris Holtmann who was hired in June and took over a team that missed the postseason last year. Amazing. Take a bow, Brutus.

Biggest disappointment: Purdue. This was a season-defining week for the Boilermakers, a chance to send a message that it was indeed king of the Big Ten and an NCAA No. 1 seed. Purdue flopped. When the week dawned, the Boilermakers were riding a 19-game winning streak and in first place with a 12-0 Big Ten mark. When the week finished, the Boilermakers were riding a two-game losing skid-falling at home to No. 14 Ohio State and at No. 4 Michigan State-and looking up at the Buckeyes in the Big Ten standings. League title hopes? NCAA No. 1 seed? Both are in peril for Purdue, which squandered a big opportunity last week.

Best win: No. 14 Ohio State 64, No. 3 Purdue 63. Consider this: Purdue had won 19 consecutive games since its last loss on Thanksgiving, and it hadn't lost at Mackey Arena since Jan. 1, 2017, an overtime defeat to Minnesota. The Buckeyes didn't care about the Boilermakers' run of success, pulling a stunner by clipping the third-ranked team Wednesday night. And the Buckeyes did it without suspended point guard Kam Williams. It's the latest chapter in what has been the most surprising season of any team in the nation. Best of all, the victory propelled Ohio State into first place and put it in control of its destiny to win the league title. Big road games loom at Penn State, at Michigan and at Indiana.

"Sometimes you get beat on a bank shot, like we did…

…And sometimes you win on a bank shot."

Go inside the @OhioStateHoops locker room following their huge win at No. 3 Purdue on @BTNJourney, Fueled by @Gatorade: pic.twitter.com/QvN5MQk8He

Best shot: Michigan State's Miles Bridges vs. Purdue. There may not be a bigger shot hit by anyone this season in the Big Ten than the star's game-winning dagger launched from 35-feet with 2.7 seconds to go in a tie game vs. No. 3 Purdue on Saturday. Bridges' 3-point bomb was money, as he finished with 20 points and pushed the No. 4 Spartans to a 68-65 win, MSU's eighth in a row. This Keita Bates-Diop reverse finish at Purdue, while not necessarily a shot, needs your attention.

Best dunk: Nebraska's Isaiah Roby vs. Rutgers. Lordy!! Roby had a slam Dominique Wilkins could appreciate on Saturday, driving from the top of the 3-point arc, taking off from the "B1G" logo and cocking his right arm back before hammering it home. The dunk was so powerful, it knocked our camera on top of the backboard out of focus. For real.

Best moment: Ohio State's Keita Bates Diop at Purdue. It was a simple putback, but it was an epic putback by the Ohio State standout, who swooped in to rebound a miss by Jae'Sean Tate and laid the ball into the hoop with 2.8 second left for the game-winning points in a 64-63 win at Purdue on Wednesday. It was yet another big moment in a big season by Bates-Diop, who figures to be the runaway winner of Big Ten Player of the Year honors.

Best blooper: Ohio State turnover vs. Iowa. When you're cruising like Ohio State is, you can laugh at the mistakes, as the first-place Buckeyes did when Andrew Dakich, on the bench, caught a pass from his teammate. The turnover led to a very good laugh, in fact.

#TFW you're all alone in first place. pic.twitter.com/tnTTmKQop6

Did you see this? Nebraska wore black warm-up T-shirts emblazoned with "Hate Will Never Win," the team's message it is delivering following the release of videos of a white nationalist student that have roiled campus. The Huskers also appeared in a video shown before the game that concluded with the statement that Nebraska is "a community that stands together like a team. We rise together against racism and hate because hate will never win." The Huskers will wear the T-shirts in warm-ups for the rest of the season, coach Tim Miles said.