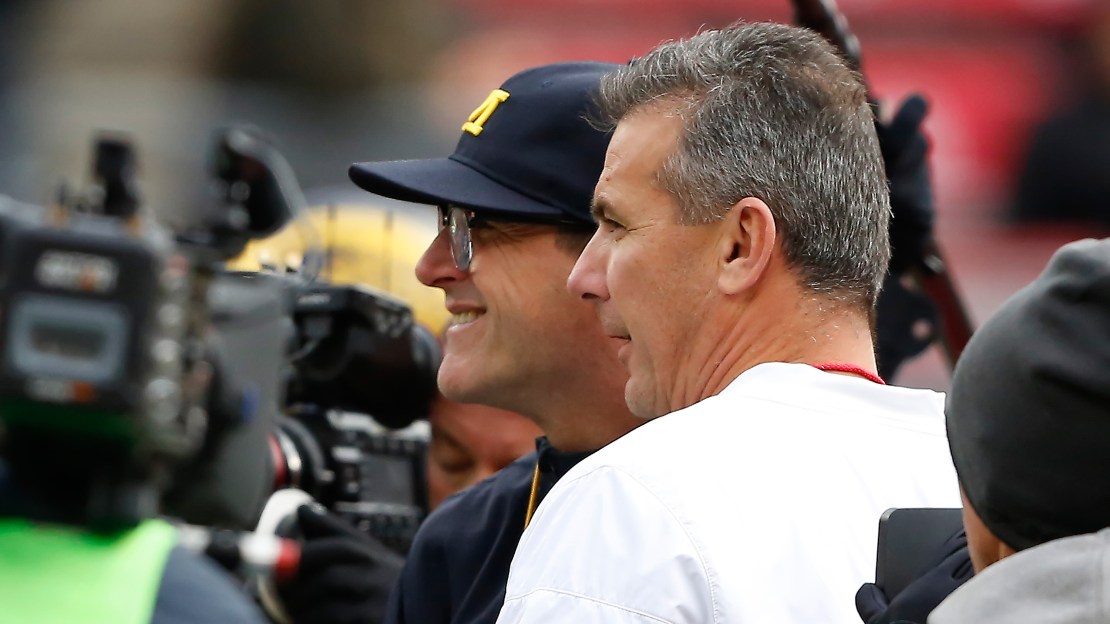 Stop me if you've heard this before: Ohio State has the top recruiting class in the Big Ten. It's the seventh consecutive year the Buckeyes have sat on top of the Big Ten recruiting board, which just happens to parallel the arrival of Urban Meyer in Columbus.

Traditionally, the first Wednesday of February is THE National Signing Day. But this academic season, there were two for the first time ever. The first occurred in late-December, when schools filled the vast majority of their classes. Today, schools put the finishing touches on their 2018 classes. And the new two-part recruiting calendar seems to be a success.

"I think it was a great step forward," Northwestern coach Pat Fitzgerald told BTN, who noted that with the bulk of his class already inked in December and it allowed him to take a harder look at 2019 prospects.

Ohio State landed an embarrassment of riches in the Class of 2018, led by players like S Tyreke Johnson, the No. 1 DB in the nation and Teradja Mitchell, the top LB recruit in the Big Ten. Others to watch: DT Taron Vincent, LB K'Vaughan Pope, LB Dallas Gant, DE Tyreke Smith, S Josh Proctor and WR Kamryn Babb, who is coming off injury. Ohio State signed some boffo offensive linemen in Matthew Jones and Max Wray. But the gem was Nicholas Petit-Frere, the top ranked OT in the nation who inked today. OSU also added LB Javontae Jean-Baptiste today, too. Want more? Jeremy Ruckert is the top tight end recruit in the Big Ten. And DT Antwuan Jackson is the No. 1 JC recruit in America, adding to an impressive array of defensive linemen in this Buckeye class.

Penn State also turned heads. In fact, James Franklin has landed his best class since becoming Penn State coach, as the Nittany Lions have their first top-five class since 2000. WR Justin Shorter looks like an instant impact, along with RB Ricky Slade and TEs Zack Kuntz and Pat Freiermuth. DE Micah Parsons, the top player in Pennsylvania, is a man-child and huge "get." P.J. Mustipher is a good DT. Nana Asiedu is an offensive lineman to watch. And LBs Jesse Luketa and Nick Tarburton are good-looking signees already on campus. Want more? PSU landed the top kicker in the Big Ten in Jake Pinegar.

Scott Frost made a big splash in his first go-around as Nebraska's new coach. The Huskers scored big with safeties C.J. Smith and Cam'ron Jones, along with defensive end Caleb Tannor. Others to watch: DE Tate Wildeman, TE Cameron Jurgens and WR Dominick Watt. Blue-chip QB Adrian Martinez is already on campus and may be the future face of the program. Frost relied on a lot of JCs, with five on board including four already enrolled.

Jim Harbaugh didn't have as splashy of a Signing Day as he has had in recent years, but Michigan still did well. Offensive lineman Jalen Mayfield is a good one, along with QB Joe Milton. DE Aidan Hutchinson is the son of former Wolverine star Chris Hutchinson. LB Cameron McGrone may be the best Michigan signee. Also keep an eye on CB Myles "Spider" Sims. TE Mustapha Muhammad could be special.

Maryland keeps reeling in studs despite not having much on-field success in recent years. DJ Durkin landed gems in offensive linemen Jaelyn Duncan and Evan Gregory and DT Austin Fontaine. WR Darryl Jones is one to watch, along with under-the-radar WR Brian Cobbs. K Joseph Petrino can kick with both feet.

Iowa made a late splash with LB Jayden McDonald and CB Donald Johnson. Also have to like DE John Waggoner and safeties Dallas Craddieth and Julius Brents.

P.J. Fleck continues to make noise at Minnesota. Gotta like his offensive linemen, led by Curtis Dunlap and Daniel Faalele, a 6-8, 395-pound native of Australia. WR Rashad Bateman could be a difference-maker. He was a basketball stud.

Michigan State landed one of the top DBs in the Big Ten in Kalon Gervin, who is on campus. Other top Spartans are CB Davion Williams, TE Trenton Gillison and OLs Jacob Isaia and Dimitri Douglas.

Purdue landed what it thinks could be a transformative player for its offense in diminutive playmaking WR Rondale Moore, a one-time Texas commit.

Look for them under center: The Big Ten signed some good quarterbacks, such as Michigan's Joe Milton, Michigan State's Theo Day, Rutgers' Artur Sitkowski, Iowa's Spencer Petras, Indiana's Michael Penix, Purdue's Jack Plummer, Minnesota's Victor Viramontes and Nebraska's Adrian Martinez. Viramontes is a JC who could maybe start this fall for QB-hungry Minnesota. Keep an eye on Plummer at Purdue. He is already enrolled and will get a long look this spring with starting QBs David Blough and Elijah Sindelar coming off injury. Jeff Brohm raves about Plummer.

Here is the top offensive and defensive recruit for each Big Ten school, according to 247.com.