Best of the week that was: Keita Bates-Diop continues to shine 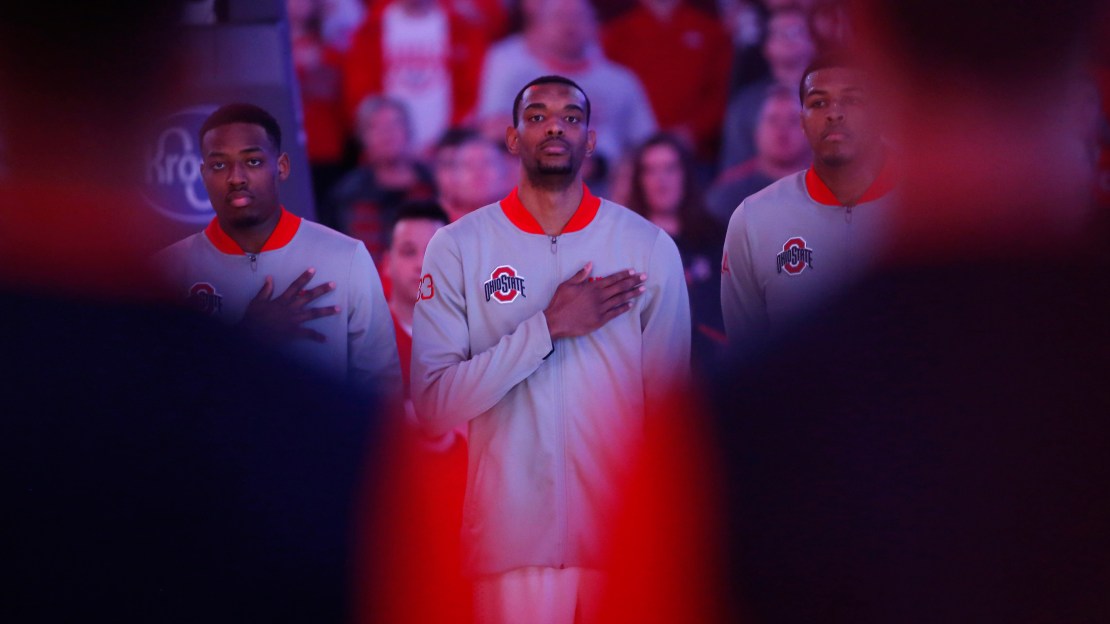 More of the same in the Big Ten, as Purdue, Ohio State and Michigan State continue to show their dominance. How strong have these three schools been? They are a combined 33-3 in Big Ten play. The losses? The Buckeyes fell on a last-second miracle shot at home to Penn State. The Spartans lost at Ohio State and at home to Michigan. The Boilermakers remain perfect.

Here is a look at Best of the Week.

Biggest surprise: Nebraska. The Cornhuskers won their lone game of the week, rallying for a 74-63 win at Wisconsin. The Huskers are making a push for their first NCAA bid since 2014. The Cornhuskers (17-8 overall; 8-4 Big Ten) have won three in a row and 10-of-13, as Tim Miles' crew is humming. Nebraska's remaining six games look very winnable: at Minnesota, Rutgers, Maryland, at Illinois, Indiana and Penn State. Who is gonna stop Nebraska?

Biggest disappointment: Wisconsin. The Badgers took the O-fer this week, losing three games in what has been a dreary season. First, the Badgers fell to Nebraska, 74-63, on Monday. Then, UW lost at home to Northwestern, 60-52, on Thursday. On Sunday, UW fell at Maryland, 68-63. The Badgers' streak of 19 straight NCAA tournaments will be snapped, barring a Big Ten tourney title. And the run of finishing in the top-four of the Big Ten standings for 17 years in a row is toast. It's a young team in which freshmen or less experienced players have been forced to play more minutes because of injuries, especially at guard. UW is 10-15 overall and 3-9 in the Big Ten. It wasn't that long ago Wisconsin was playing in back-to-back Final Fours (2014 and 2015).

Best win: Michigan State 63, Indiana 60. No game really stands out, as there was an absence of upsets or marquee wins vs. top teams. But the Spartans easily could have lost this one, as the Hoosiers had an amazing 25 offensive rebounds en route to out rebounding the Spartans, 53-29. MSU was the national leader in rebound margin, making Indiana's work on the glass all the more amazing. But the gritty Spartans had a school-record 13 blocks en route to winning their sixth game in a row. MSU appears to be gaining steam. Look out.

Best player: Keita Bates-Diop, Ohio State. The early leader for Big Ten player of the year shot 51 percent and averaged 24 points, 13 rebounds, three assists and two blocks in a pair of wins. Bates-Diop was at his best Sunday, scoring a career-high 35 points and registering his second consecutive 13-rebound effort in a comeback win vs. Illinois. Not to be ignored, Nebraska's James Palmer Jr. continued his torrid scoring, putting up 28 points, eight rebounds and two steals at Wisconsin, the Huskers' lone game of the week.

Best stat: 19, wins in a row for Purdue, which is the longest winning streak in the nation and in school history. The Boilermakers dispatched Maryland and Rutgers this week. The last time Purdue lost? It was on Thanksgiving vs. Western Kentucky. The Boilermakers' next game is a biggie: Wednesday, when Ohio State visits Mackey Arena in a showdown of the Big Ten's top two teams on BTN/BTN2Go. Can't ignore Dererk Pardon's flawless night from the field (8-of-8) en route to scoring a game-high 17 points in Northwestern's win at Wisconsin. Another noteworthy stat: Michigan hit just 12 of 28 free throws (43 percent) in its victory vs. Minnesota on Saturday.

Best dunk: Michigan State's Miles Bridges vs. Penn State. If you missed the high-flyer's fluch Wednesday night in 76-68 win vs. Penn State, you missed an eye-popper. Speaking of the Nittany Lions, they had several dunks worthy of this week's honor, highlighted by this ridiculous Josh Reaves poster dunk vs. Iowa on Saturday night.

Best shot: Minnesota's Nate Mason at Michigan. Trailing, 63-60, with seconds hanging on the clock, Minnesota needed a big shot on Saturday. And the Minnesota guard delivered with a monster 3-point bomb to force OT. The Golden Gophers ended up falling in the extra session. Still, Mason's shot was money.

Best moment: We're taking it to the women's hardwood this week, where Ohio State's Makayla Waterman had to be stretchered off the court following a fall under the basket vs. Wisconsin. Waterman spent several minutes on the deck, laying motionless, before the stretcher made its way out to the floor. After the game, the forward updated everyone on her status.

Even better news than the W. #thankful #home pic.twitter.com/2l7UHOWxn0

Did you see this? It was pretty cool to see former Illinois star Deron Williams back on campus for the Fighting Illini's 91-60 victory vs. Rutgers on Tuesday. Williams spoke to the team prior to the win, the second in a row for Illinois. He is a three-time NBA All-Star and won gold medals with Team USA in 2008 and 2012. At his alma mater, Williams is best known for his 3-pointer that helped propel the Illini into the Final Four in 2005.