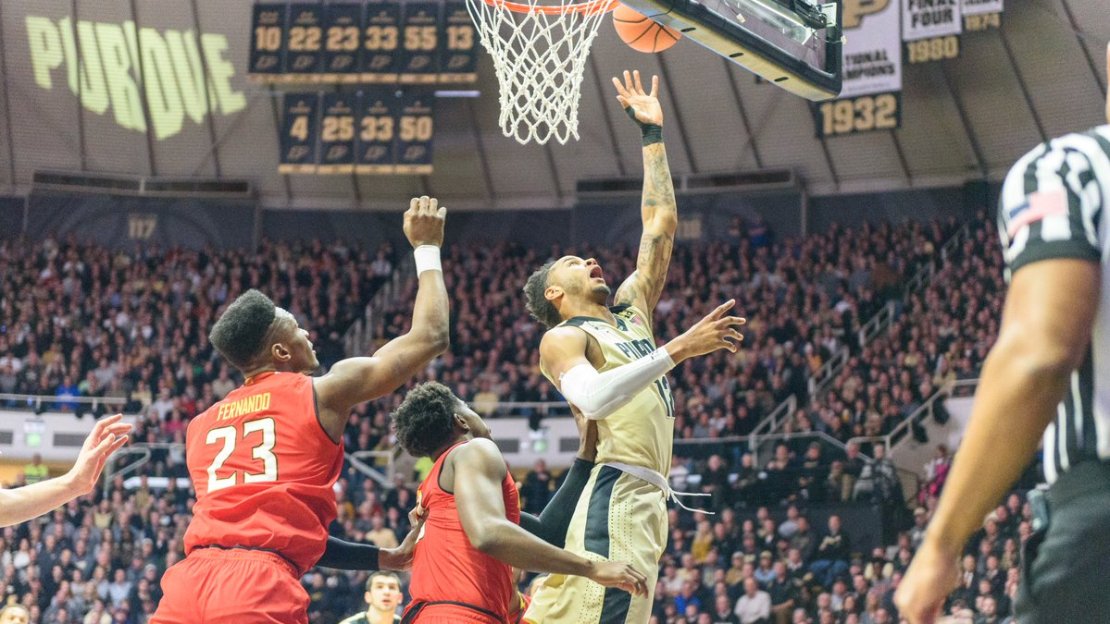 WEST LAFAYETTE, Ind. – Isaac Haas had 20 points and nine rebounds, Carsen Edwards scored 17 points and No. 3 Purdue pulled away from Maryland 75-67 on Wednesday night to extend the nation's longest active winning streak to 18.

The Boilermakers (22-2, 11-0 Big Ten) also continued their best conference start in school history, broke another school record with their 13th consecutive win over a league foe and still won their 21st straight home game. Only Cincinnati (38) has a longer home-court streak.

Bruno Fernando finished with 20 points and 10 rebounds to lead Maryland (15-9, 4-7). Kevin Huerter had 16 points and four 3s for the Terrapins, who have lost three straight with the last two coming to top-10 teams.

The Boilermakers wasted no time taking control by scoring the first nine points.

Maryland spent the rest of the game futilely playing catch-up.

After making only three baskets in the first 12 minutes, they trailed by as much as 13 points at 27-14.

But Purdue answered the first challenge with five straight points and the third with an 8-2 run to make it 51-40.

Maryland got one more chance when Huerter knocked down the last of three consecutive 3s with 9:17 left. Suddenly, the Terrapins were within 55-52 and Purdue's streak appeared as though it could be in jeopardy.

Instead, Haas made two free throws, P.J. Thompson hit a 3 and Haas posted up for a dunk to give Purdue a 62-52 cushion.

The Terrapins couldn't get closer than six again.

Maryland: The Terrapins' showed some grit Wednesday. Despite never leading and never being tied, they fought and clawed to stay close enough to make it interesting. And they wound up falling to the hottest college team in America.

Purdue: The Boilermakers just keep overcoming obstacles. With their best player, Vincent Edwards, sick, Haas and Carsen Edwards picked up the pace and made sure the streak did not end.

Maryland: Missed its first six shots and had 11 of 14 turnovers in the first half. … The Terrapins are 3-6 since a six-game winning streak ended. … Maryland has lost four straight in the series. … Despite being one of the nation's top rebounding teams, the Terrapins only had a 33-32 edge. … Darryl Morsell had 13 points and nine rebounds. … Anthony Cowan Jr. had 11 points and eight assists.

Purdue: Has only allowed one team, Michigan, to top 70 points since Dec. 3. … The Boilermakers have tied Ohio State for the second-best start in conference play over the last 20 years. Only Illinois, at 15-0 in 2004-05, was better. … Purdue's shot 44.8 percent from the field and has now shot better than 44.3 percent in 16 consecutive games. … Vincent Edwards had eight points, 11 rebounds and five assists.

Purdue: Will try to extend its seven-game road winning streak Saturday at Rutgers.