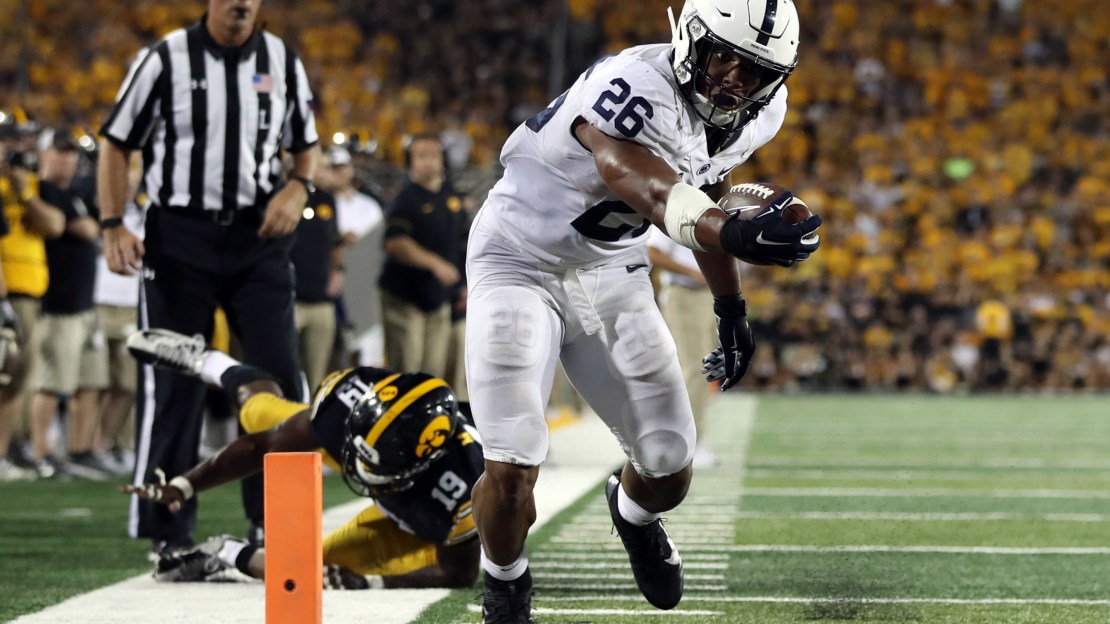 Spring football isn't too far around the corner. That is when schools can begin to take their first meaningful steps toward building their 2018 squads. Some top talent has left Big Ten campuses.

Here is a look at the 15 biggest shoes to fill for Big Ten schools in 2018–along with a possible replacement.

1. RB Saquon Barkley, Penn State. He has left early as an all-time great. Barkley finished fourth in the Big Ten in rushing (97.8 ypg), running 217 times for 1,271 yards last season en route to being named Big Ten Running Back of the Year. His 18 rushing TDs led the Big Ten. He also caught 54 passes for 632 yards and three scores. On top of all that, Barkley ran back two kickoffs for TDs last season en route to pacing the Big Ten in all-purpose yards with 2,329. He leaves State College as the school's all-time leader in rushing TDs and all-purpose yards. Barkley also had 671 career carries for 3,843 yards and 43 TDs.
Possible replacement: Miles Sanders

2. QB J.T. Barrett, Ohio State. He departs Columbus as a Big Ten icon. Barrett started 44 games in his Ohio State career and set the school record with 38 victories, including four wins over Michigan to become the first Ohio State quarterback in school history to start four wins over its rivals from the north. He was named the Quarterback of the Year in the Big Ten three times and the Chicago Tribune Silver Football award winner as the Big Ten's best player once. He set a total of 39 Ohio State (34) or Big Ten Conference (five) records.
Possible replacement: Dwayne Haskins

3. RB Justin Jackson, Northwestern. NU has had some great backs the last 20 years, including Darnell Autry, Tyrell Sutton and Damien Anderson. But Jackson tops them all, leaving Evanston as the school's all-time leading rusher with 5,283 yards. His 39 rushing TDs also are a school standard. Jackson ran for over 1,000 years each season on campus. The only other Big Ten player to achieve that feat is Wisconsin's Ron Dayne. Jackson was consensus second-team All-Big Ten.
Possible replacement: Jeremy Larkin

4. CB Josh Jackson, Iowa. He opted to turn pro after a sensational junior season that saw him lead the nation in passes defended with 26 and also pace the nation in interceptions with eight. Jackson ran back two picks for touchdowns. He earned consensus All-American honors and was named the Big Ten Defensive Back of the Year.
Possible replacement: Michael Ojemudia

5. CB Denzel Ward, Ohio State. The star cornerback opted to turn pro early after earning first-team All-Big Ten honors from the media and second-team from the coaches. Ward ranked third in the Big Ten in passes defended with 17 and had two picks. He helped the Buckeyes rank No. 5 in the Big Ten in pass defense (195.9 ypg). Bottom line: Ward was a shutdown corner.
Possible replacement: Jeffrey Okudah

6. WR DJ Moore, Maryland. He was a sensation, leading the Big Ten with in catches (80) and yards (1,033) while adding eight scoring grabs. As a result, Moore earned Big Ten Receiver of the Year honors. His 80 receptions set a new Maryland single-season record. Moore was consistent for the Terps, ending his junior campaign having started 35 straight games and making a catch in 33 consecutive contests. He opted to turn pro.
Possible replacement: Tahj Capehart

7. NT Maurice Hurst, Michigan. He won a raft of honors in 2017. In addition to being consensus first-team All-Big Ten, Hurst was a consensus All-American. He had five sacks to go along with 13.5 TFLs for a Wolverines defense that was among the best in the nation.
Possible replacement: Michael Dwumfour

8. LB Josey Jewell, Iowa. He leaves campus as an all-time great, earning consensus All-American honors in 2017 in addition to being named the Big Ten Linebacker of the Year. Jewell led the Big Ten and ranked fourth in the nation in tackles in 2017 with 136 stops, averaging 11.3 per game and pacing the team with 13.5 TFLs.
Possible replacement: Kristian Welch

9. CB Nick Nelson, Wisconsin. In his only season at Wisconsin following his transfer from Hawaii, Nelson was a star. A big, physical corner, Nelson made 35 tackles with a team-high 21 passes broken up, which ranked No. 2 in the league. He also doubled as a punt return man, averaging 8.6 yards per return with a TD. Nelson was consensus first-team All-Big Ten.
Possible replacement: Lubern Figaro

10. C Billy Price, Ohio State. The Rimington Award winner as the nation's top center and a consensus first-team All-Big Ten selection, Price was the bellwether for a strong Buckeye offensive line. He directed traffic up front and set the tone for a line that helped Ohio State rank No. 1 in the Big Ten in rushing (243.2 ypg).
Possible replacement: Brady Taylor

11. TE Troy Fumagalli, Wisconsin. A former walk-on, he led the team with 46 grabs for 547 yards and four TDs en route to being named Big Ten Tight End of the Year. Fumagalli leaves campus with 135 career catches for 1,627 yards and seven TDs, earning first-team All-Big Ten honors from the coaches and second-team from the media.
Possible replacement: Zander Neuville

12. LT Jamarco Jones, Ohio State. A consensus first-team All-Big Ten selection, Jones was an anchor on the edge of the line at the key left tackle spot. He helped freshman RB J.K. Dobbins rank No. 3 in the Big Ten in rushing with a 100.3-yard average. Jones a proverbial cut-above.
Possible replacement: Joshua Alabi

13. WR Simmie Cobbs, Indiana. It was a blow-but not a shock-to see this big, productive target turn pro. He was second in the Big Ten in catches with 72 that went for 841 yards and eight TDs. Cobbs leaves campus with 139 career receptions (eighth in IU history) for 1,990 yards (ninth) and 12 TDs to go along with seven 100-yard receiving games.
Possible replacement: Ty Fryfogle

14. TE Mike Gesicki, Penn State. One of the nation's top tight ends, Gesicki led Penn State with 57 receptions which went for 563 yards. He was a rangy target who was effective over the middle and in the red zone, as he had nine TD receptions. Gesicki leaves campus with 129 career catches for 1,481 yards and 15 TDs. He was first-team All-Big Ten by the media and second-team by the coaches.
Possible replacement: Nick Bowers

15. LB Tegray Scales, Indiana. He leaves as one of the best linebackers in recent Indiana history. Scales became the first Indiana linebacker to earn All-America honors (2016) since 1987 and the first to collect first team All-Big Ten recognition (2017) since 1988. He finished third on IU's charts with 46 career tackles for loss, sixth with 18 sacks and 10th with 325 stops. In 2017, Scales finished second on the team with 89 tackles in 2017. He also led the team with six sacks and 12.5 TFLs. He was first-team All-Big Ten by the media and second-team by the coaches.
Possible replacement: Reakwon Jones