Best of the week that was: How about that Penn State-Ohio State finish? 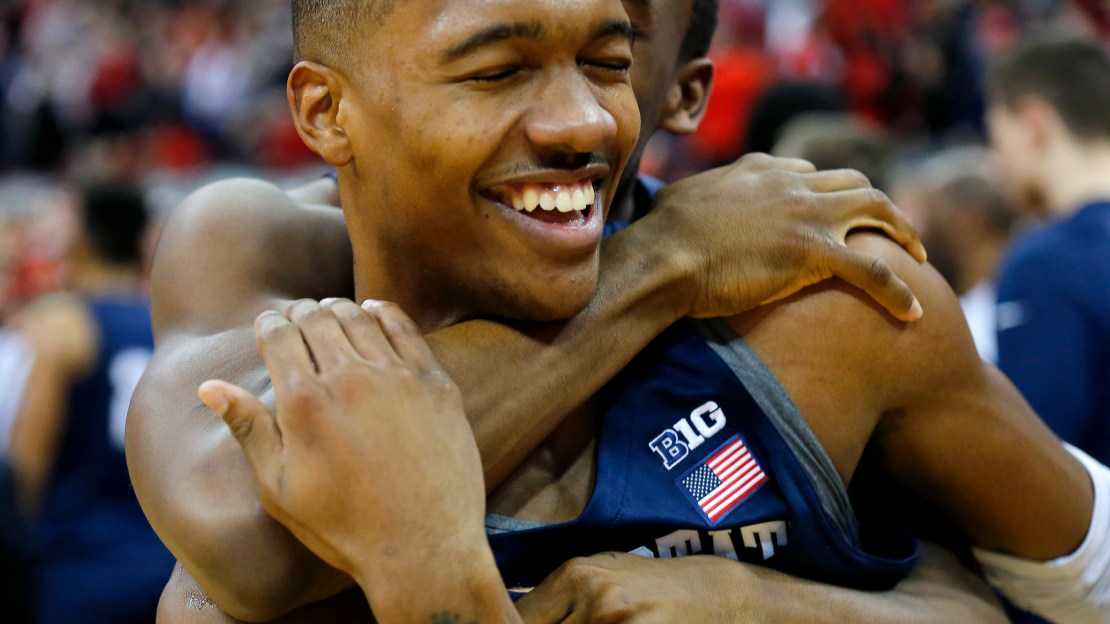 The Big Ten season has reached its halfway point. And Purdue has emerged as the team to beat, starting conference season 10-0 for the first time ever. Ohio State is now looking up at the Boilermakers, having suffered its first loss of the season. And don't count out Michigan State, which won three games last week.

Biggest surprise: Penn State. Reports about the demise of the Nittany Lions have been greatly exaggerated. The return of guard Josh Reaves has sparked the team. The Nittany Lions are a totally different team with Reaves in the lineup. He adds versatility on both ends of the court, notching double-digit points in each game he's played since returning from a four-game suspension for academic reasons. This week, Reaves moved into 10th all-time on Penn State's steals list with 138.

Biggest disappointment: Maryland. The Terrapins' NCAA hopes are slipping away. Maryland lost at Indiana and to Michigan State at home this week. The Terps have lost four of five and are 15-8 overall and 4-6 in the Big Ten. Time is running out in College Park.

Best win: Penn State 82, Ohio State 79. The Buckeyes entered Thursday's home game vs. the then-struggling Nittany Lions with a perfect 9-0 Big Ten clip. They'd get to 10-0, right? Wrong. Penn State had other ideas, as Tony Carr hit a buzzer-beater to cap a thrilling finish. Also have to mention Illinois' 73-71 win over Indiana. It was the Fighting Illini's first Big Ten triumph of the season. And it was much-needed for a program that had come oh-so-close to winning several times ? but couldn't finish.

Best player: Purdue's Isaac Haas. There were so many worthy candidates, including teammate Vincent Edwards, Michigan State's Miles Bridges and Jaren Jackson Jr., Nebraska's James Palmer Jr., and Penn State's Tony Carr, to name a handful. But it was Haas who led the Big Ten's best team to two important wins. In the victories vs. Michigan and at rival Indiana, the 7-foot-2 star averaged 25 points, 5.5 rebounds, 2.5 assists and 1.5 blocks; he also shot 65 percent.

Best stat: 19, rebounds for Penn State's Mike Watkins in a 60-43 win vs. Rutgers on Saturday. To little surprise, this was a career-high for Watkins, who also added 15 points and three blocks. Here's another stat for you. And another: Iowa's Jordan Bohannon has hit at least five 3-pointers in his last four road games, hitting exactly 50 percent of his attempts (21 of 42). One last one: Nebraska's 98 points in Saturday's win vs. Iowa were its most in a conference game since 2002, as a member of the Big 12.

Best stat line: Michigan State's Miles Bridges at Illinois. The preseason Big Ten player of the year looked like an All-American in an 87-74 win at Illinois on Monday, scoring 31 points on 11-of-13 shooting and hitting all seven of his free throws and 2-of-4 3-pointers, while also tallying eight rebounds, two blocks and a steal. Vincent Edwards compiled a pretty line in Purdue's win vs. Michigan, scoring 30 points on 11 shots, and adding five rebounds, five assists and one steal.

Best dunk: Purdue's Carsen Edwards. Jon Octeus had an unforgettable poster dunk a few years ago at Indiana, and it was Edwards' turn Sunday. The athletic and exciting sophomore elevated for a beautiful And-1 transition poster dunk to turn the tide and help the Boilermakers rally for the rivalry win. Here's another look at the dunk. Tum Tum Nairn had a powerful transition flush at Maryland on Sunday that deserves mention, too, as does this Nazeer Bostick hammer.

Best shot: Ohio State's Keita Bates-Diop and Penn State's Tony Carr. The two stars traded DEEP triples in the final seconds Thursday night. First, Bates-Diop nailed a monster 3-pointer with under 10 seconds to play. Then, Carr banked in an impossibly long 3-pointer at the buzzer to give Penn State a stunning 82-79 win vs. No. 13 OSU. It was the Buckeyes' first Big Ten defeat.

Best moment: Illinois celebrates first Big Ten win. It was nice to see Illinois notch its first Big Ten win when it took down visiting Indiana on Wednesday. And the Fighting Illini did it while wearing those sweet throwback unis.