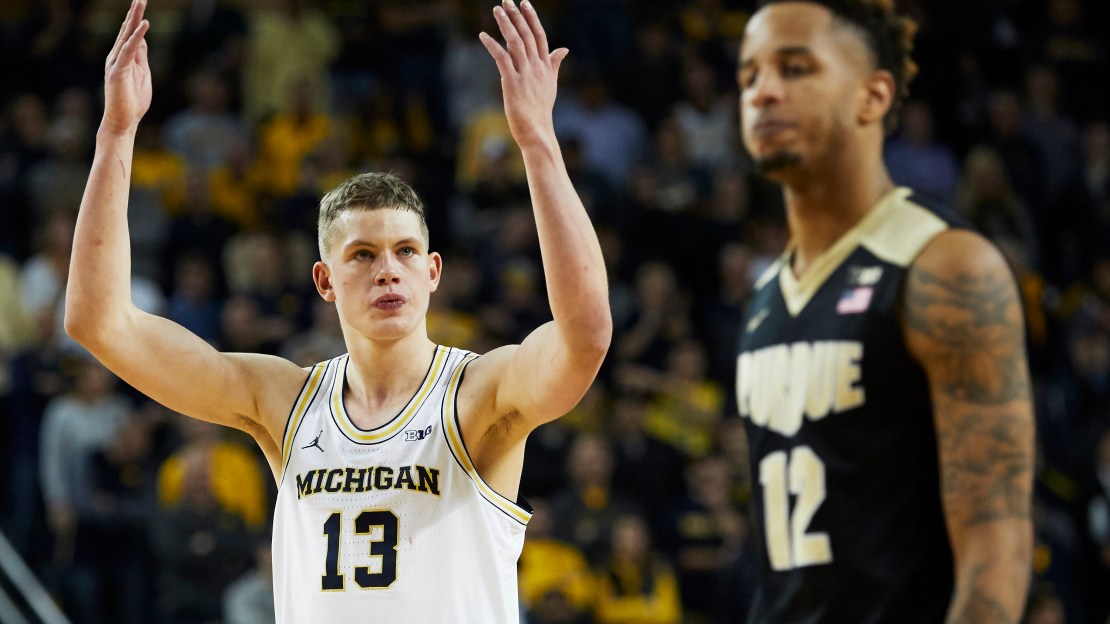 No shortage of good matchups this week, including a clash between ranked teams in Mackey Arena when Michigan visits Purdue on Thursday.

Here is a look at the best of the coming week.

Game of the week: Michigan at Purdue, Thursday. If this is anything like the first meeting in Ann Arbor on January 10, when the Boilermakers used a late surge to pull out a 70-69 win, it should be a doozy. No. 3 Purdue is the hottest team in the nation, winners of 15 in a row. Since that loss to the Boilers, the Wolverines have won three of four with a big victory at Michigan State. The loss? A 20-point defeat at Nebraska.

Don't overlook this game: Nebraska at Ohio State, Monday. The Buckeyes arguably have been the biggest surprise in the nation. OSU is tied for first in the Big Ten with Purdue with an 8-0 conference mark. The Buckeyes have won 12 of 13. The only loss in that span? To North Carolina. Ohio State can't overlook the Cornhuskers, a pesky team that is 5-3 in the Big Ten and that has won three of four. The last victory for NU was a 20-point trouncing of then No. 23 Michigan. Another one to consider: Purdue at Indiana. It is the lone meeting between the two rivals this season, and it's at Assembly Hall, where the Hoosiers are no stranger to pulling off shockers.

Must win: Indiana vs. Maryland, Monday. If the Hoosiers want a shot to earn a bid to the NCAA tourney, they need to protect their turf. And that means beating the Terrapins. IU is 4-3 in the Big Ten and 11-8 overall. Indiana had won three in a row before getting blasted, 85-57, at Michigan State on Friday. The Hoosiers are 3-0 at home vs. Big Ten squads. Which IU team will show up? The one that lost at home to Indiana State and Fort Wayne? Or the one that beat Notre Dame and fought hard in a 10-point loss to then No. 1 Duke? Making this one all the more important is the fact that the Hoosiers entertain perfect and No. 3 Purdue to close out the week.

Best individual matchup: Wisconsin's Ethan Happ vs. Michigan State's Jaren Jackson Jr./Nick Ward, Friday. Happ has been a one-man gang at times for the Badgers. How shorthanded has UW been? Happ has been asked at times to bring the ball up the court. Jackson and Ward are a load for anyone, the pivot points for a Spartans squad that has no wiggle room with two league losses already.

Upset alert: Michigan State at Illinois, Monday. This would be a monumental upset, but the Spartans need to be wary when they travel to Champaign. Yes, the Fighting Illini got eviscerated the last time out, falling 75-50 at Wisconsin in arguably its worst showing of the year to move to 0-7 in conference play. But Illinois has come oh-so-close to winning in Big Ten action, falling in hard-fought tilts to Northwestern, Maryland, Iowa and Nebraska. Illinois is going to beat someone. And it still has to ache from that beat-down it just suffered at Madison. Illinois has talent, is well-coached, motivated and has nothing to lose. It's dangerous.

Big week: Nebraska. The Cornhuskers are fighting for their NCAA lives, trying to reach the Big Dance for the first time since 2014. And Nebraska just may do it. The Huskers can augment their resume this week with three games: at Ohio State; at Rutgers; vs. Iowa. If Nebraska could win all three, it would be outstanding. But it can do no worse than a 2-1 mark.