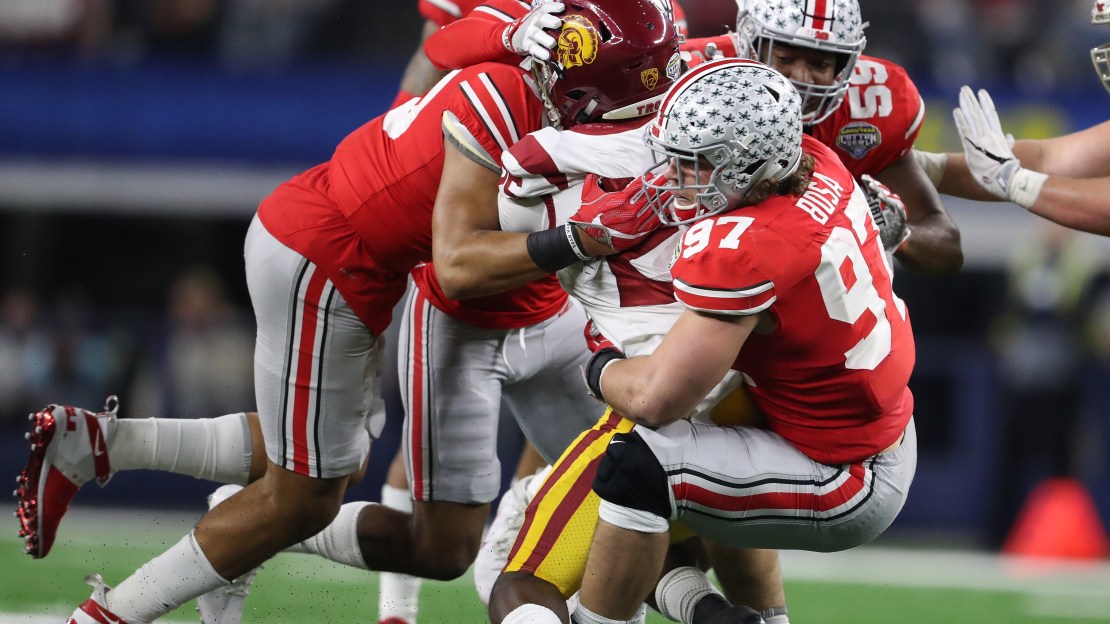 Yes, Ohio State failed to reach the College Football Playoff, but it still was a successful season for Urban Meyer. The Buckeyes won the Big Ten title and capped a 12-win season with a victory vs. USC in the Cotton Bowl. If not for a confounding 55-24 loss at Iowa in November, Ohio State may have reached the playoff.

The offense didn't have consistent success with its vertical pass game, but it still was a potent attack. Ohio State ranked No. 1 in the Big Ten in scoring (41.1 ypg) and No. 1 in total offense (506.0 ypg). The defense also excelled, ranking fourth in scoring (19.0 ppg) and fourth in total defense (300.9 ypg).

QB J.T. Barrett. He departs Columbus as a Big Ten icon. Barrett started 44 games in his Ohio State career and set the school record with 38 victories, including four wins over Michigan to become the first Ohio State quarterback in school history to start four wins over its rivals from the north. He was named the Quarterback of the Year in the Big Ten three times and the Chicago Tribune Silver Football award winner as the Big Ten's best player once. He set a total of 39 Ohio State (34) or Big Ten Conference (five) records.

DE Sam Hubbard. He was a consensus second-team All-Big Ten honoree who opted to turn pro. Hubbard formed a formidable duo with E Nick Bosa, ranking second on the team in sacks with eight and second in TFLs with 13.5. He was part of line that helped Ohio State rank No. 3 in the Big Ten vs. the run (105.1 ypg), notching 42 tackles in 2017. The 2.9 yards per carry allowed were the fewest in the league.

LT Jamarco Jones. A consensus first-team All-Big Ten selection, Jones was an anchor on the edge of the line at the key left tackle spot. He helped freshman RB J.K. Dobbins rank No. 3 in the Big Ten in rushing with a 100.3-yard average. Jones a proverbial cut-above.

C Billy Price. The Rimington Award winner as the nation's top center and a consensus first-team All-Big Ten selection, Price was the bellwether for a strong Buckeye offensive line. He directed traffic up front and set the tone for a line that helped Ohio State rank No. 1 in the Big Ten in rushing (243.2 ypg).

CB Denzel Ward. The star cornerback opted to turn pro early after earning first-team All-Big Ten honors from the media and second-team from the coaches. Ward ranked third in the Big Ten in passes defended with 17 and had two picks. He helped the Buckeyes rank No. 5 in the Big Ten in pass defense (195.9 ypg). Bottom line: Ward was a shutdown corner.