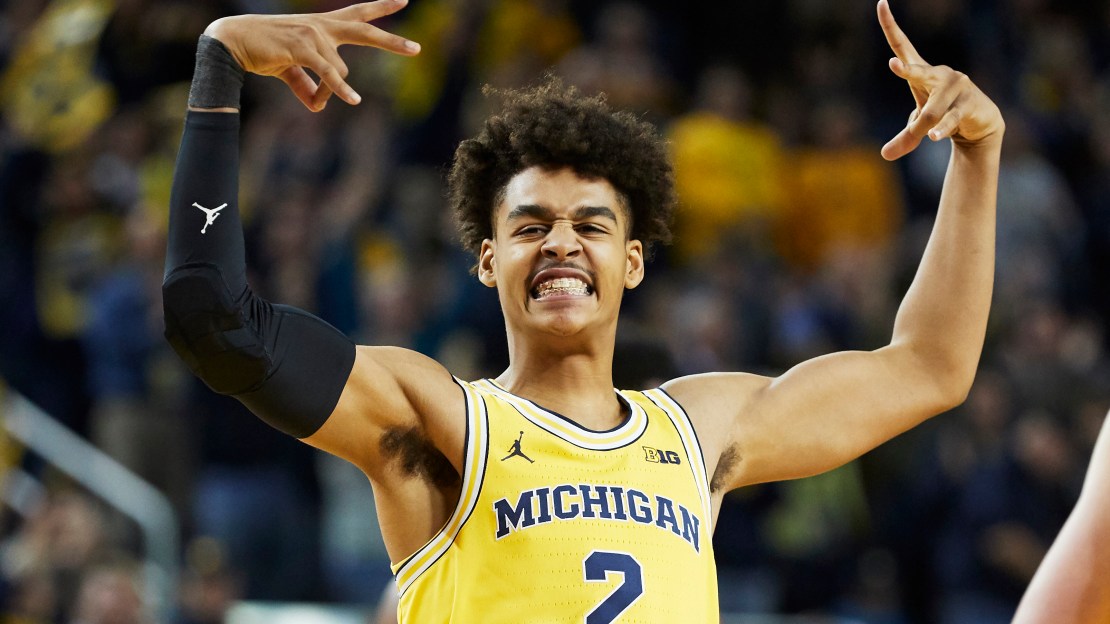 (AP) Michigan earned a spot in The Associated Press college basketball poll and almost lost it on the same day.

Muhammad-Ali Abdur-Rahkman made two free throws with 1.2 seconds left, lifting the 23rd-ranked Wolverines to a 68-67 win over Maryland on Monday night.

Kevin Huerter connected on a go-ahead 3-pointer on the previous possession for the short-handed Terrapins, who trailed by 10 with five-plus minutes left in the game.

"Prosperity, that's what the real good teams adjust to and keep winning," Michigan's Moritz Wagner said. "Even though it was ugly and we had a tough time, we found a way."

Michigan was trailing by as much as 14 in the first half and was behind 30-20 at halftime, looking lethargic after an emotionally charged win over then-No. 4 Michigan State two days earlier. The Wolverines opened the second half with a 10-0 run and later took the lead with 13:02 left while making three 3-pointers in 44 seconds.

The Terrapins (14-6, 3-4) took the lead back midway through the second half, but Wagner made a 3-pointer on the ensuing possession. The Wolverines went ahead by 10 with 5:50 to go and yet barely did enough to win against a team with just eight healthy players on scholarship.

"We never stopped playing and we kind of snuck up on them in the end," Turgeon said.

"Our first mistake was celebrating too much," Cowan said. "We should've just went back to the bench and get our game plan on defense."

Huerter had 12 on 4 of 11 shooting and Darryl Morsell added 10 points for the Terrapins, who used just three reserves and didn't play any of them more than 18 minutes.

"I don't think fatigue was any part of us losing," Huerter insisted.

The Wolverines were fortunate Wagner – who was 6 of 9 from the field – shot as well against the Terps as he did against the Spartans because they had a hard time making shots inside and out. They missed 10 of their first 13 shots and finished at 41 percent from the field.

Michigan reserve Jordan Poole, who had 11 points, was the team's only double-digit scorer other than Wagner.

Abdur-Rahkman, Zavier Simpson and Charles Matthews all entered averaging at least 10 points in Big Ten games this season. None of them scored more than seven against Maryland, and the trio combined to make just 7 of 31 shots.

"Maryland was good," Michigan coach John Beilein said. "Let's give them a lot of credit. They made us look bad."

Michigan missed some free throws late and finished 7 of 12, one game after making 27 of 32 at the line.

Beilein said he had declared his team's woes at the line over after beating the Spartans.

For Martin Luther King Jr. Day, Michigan players and coaches wore black shirts with the words "Be The Dream Live The Dream" in white lettering on the front and "MLK" on the back.

Maryland: The Terrapins may look back at this stretch of their season, reeling without key players, as a source of inspiration even though they've lost three of four.

"Yeah, I'm proud of my group," Turgeon said. "Hopefully, we can get healthy."

Michigan: The Wolverines were due for a letdown after the win over Michigan State and were able to overcome it to win for the ninth time in 10 games.

Michigan: Plays at Nebraska on Thursday night, the third game in a six-game stretch. "It doesn't get much tougher than this," Beilein said. "But everybody in this league has something like this, so we can't complain."