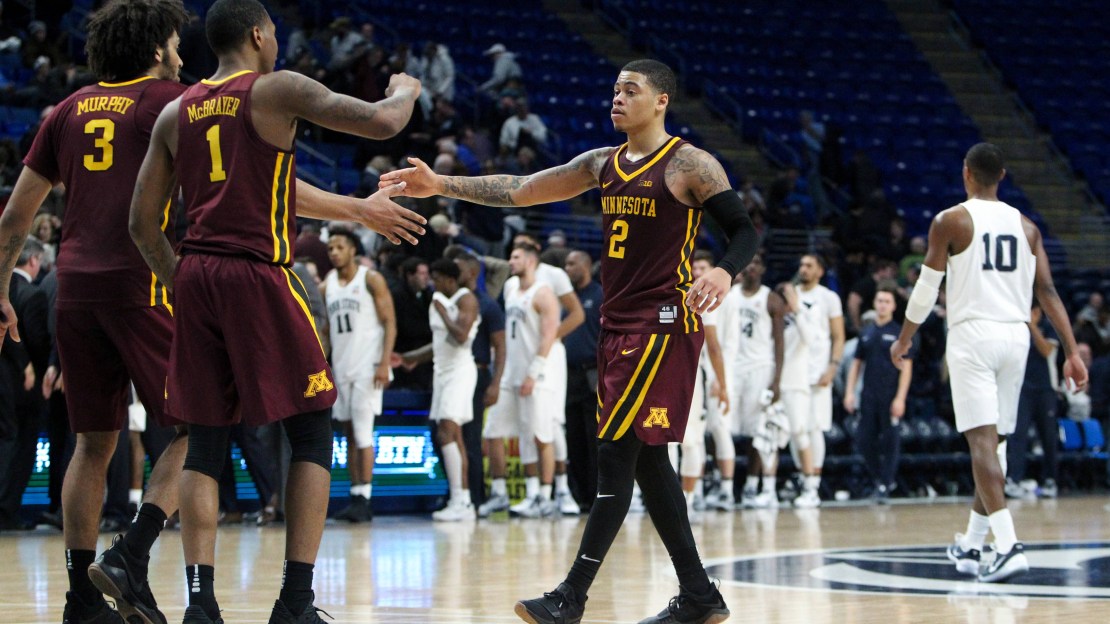 (AP) The cheers and hollers coming from the Minnesota locker room were audible at least 20 feet away, deep inside Penn State's Bryce Jordan Center.

It sounded like joy, a feeling the Golden Gophers hadn't experienced in at least 10 days after losing two of their best players – one to suspension, the other to injury.

"They were dealt a difficult situation," Minnesota coach Richard Pitino said. "And they responded well, so hopefully this gives us great confidence."

Dupree McBrayer scored 14 of a career-high 24 points in the second half and overtime, Nate Mason added 25 points and Jordan Murphy scored 22 and grabbed 19 rebounds for the Golden Gophers (14-6, 3-4 Big Ten) who snapped a three-game losing streak.

All three losses came after Reggie Lynch was suspended and Amir Coffey was hurt.

The tough stretch looked like it would continue when Tony Carr capped a late Penn State run with a 3-pointer to force overtime at 74-all.

McBrayer hit a jumper then to put Minnesota up with its largest lead of the game at 63-50 but Penn State raced back with a 15-2 run. Mike Watkins capped Penn State's surge with his second steal and sprinted the other way for a dunk that tied it at 65.

But Minnesota's shooting prowess was too much down the stretch.

The Golden Gophers made 53 percent of their field goals on 35-for-66 shooting. That included a 10-for-17 pace from 3-point range with three coming in overtime.

Minnesota: The Golden Gophers needed some positive energy and a win to kick off an East Coast road trip featuring three games in six days should boost their morale.

Penn State: The Nittany Lions need Josh Reaves back. They looked listless at points in this one without arguably their most fiery player. Notably, Penn State has allowed nearly 10 more points per game with their best defender suspended for academic reasons.

Jamir Harris earned his first career start on his birthday and knocked down back-to-back 3s in overtime to keep the game out of reach. He finished with a career-best 16 points.

He's one of a handful of players Pitino is trying to juice more minutes out of without the services of Lynch and Coffey. He played 36 minutes on Monday, 16 more than his previous high.

"I thought we needed some more scoring in there and obviously he can shoot the basketball," Pitino said. "It was one of those rare moves that worked, so you'll take credit for it when you can."

Watkins' double-double was his fifth of the season but he also fouled out in overtime and let his frustration boil over.

As Watkins came out of the game shaking his head, an assistant coach approached him and Watkins gave him a soft shove before teammates grabbed him by the arms. He sank into a chair and pulled a towel over his head for the final moments of the game.

"I think we were giving him different looks," Murphy said. "I think that got to him a little bit and inevitably got him out of the game."

Minnesota travels to Maryland on Thursday.